The Lewis County Historical Museum is located just south of Centralia Washington, in Chehalis. The museum itself occupies the Northern Pacific Railroad Depot, a Mission Revival style building on a site which had historical significance even before its connection to the railroad. The museum has information on Lewis County, the oldest county in Washington State, as well as the region’s logging and rail history. It contains numerous exhibits as well as a hands on a section for children. The museum also houses an extensive research library dedicated to the history of the region and Lewis County. 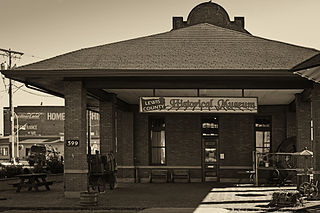 The depot built in 1912, which now houses the museum. 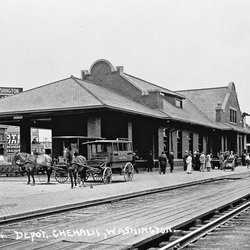 The stump which first made the site famous. 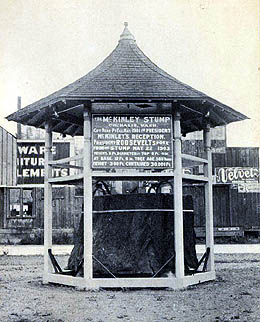 The spot where the museum now sits first came to prominence when a massive stump was placed there. It was to be used as a stage for President Mckinley, who was to visit Chehalis. Unfortunately, Mckinley didn’t make it to the town, and the stump was first used by President Theodore Roosevelt who gave a speech there in 1903. Since then the stump was used by Eugene Debs, William Howard Taft and Franklin Delano Roosevelt, who spoke there as a Vice Presidential nominee in 1920.

However this site might not have been important today if it weren’t for the Northern Pacific Railroad. It reached the region in 1872 and quickly began to bring ever more people to the Chehalis river area. The residents of Saundersville hoped to bring the railroad through their town, and built a warehouse there to entice it. The ploy worked and the town was renamed Chehalis in 1879. In 1912 the railroad constructed a Mission Revival style depot on the same site which had seen so many presidents and candidates speak. The Lewis County Historical Society, founded in 1965, secured the site as a museum which opened in 1979.("About")

This exhibit explores the lives and history of the region’s native peoples. It include historical artifacts and handmade crafts, as well as dioramas and pictures.

Here one can learn about the history of the mail in the region. From its humblest beginnings as communal mail carrying to more developed mail services.

This shows the history of the Rail-Road in Chehalis, and how the train depot came to be in that town.

This display shows an average kitchen from the turn of the century. It allows one to see not only the artifacts which people would have interacted with daily, but the importance of the kitchen as a source of warmth and tightness within the family unit.

Here one can learn about one of the most important trades of pioneer and logging towns. The smithy and saw filer was responsible for the maintenance, creation, and care for many of the tools used to not only cut down trees for logging, but also for construction and even more day to day tasks.

This example of a general store shows what would have been one of the communal hubs of the town, where the villagers would come to purchase food, supplies, and a variety of other items.

This display shows Lewis County in the mid 1970s. It is designed to show how important the rail lines are to the region, tying a wide variety of towns and cities together with the outside world. Providing both a source of commerce and of goods.("Permanent Exhibits")

The museum also has rotating exhibits throughout the year, since the Summer of 2015 they hosted an exhibit about pioneer life and the difficulties f western travel in the mid 19th century.(Rotating Exhibits)