Originally built in 1728, the Metlar-Bodine House is one of two remaining 18th century structures left in the immediate area—what was once a thriving port called Raritan Landing. It is located just down the street from the Cornelius Low House. The first part of the building was constructed by local merchant Peter Bodine. Central New Jersey real estate businessman, George Metlar, bought the house in the 1850s and expanded it, giving it its current Greek Revival appearance. Today it serves as the community's local history museum, offering various events during the year and showcasing historical artifacts ranging from prehistoric times to the 20th century. The house was placed on the National Register of Historic Places in 1973. 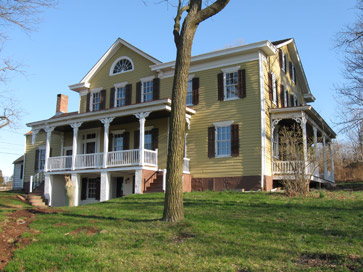 In the mid-1970s, the state department of transportation bought the house with aim of demolishing it to make way for a highway. Local residents began a strong preservation effort in 1979 which ultimately saved the building.