The Abingdon Muster Grounds was the meeting place for the 400 colonial militiamen who marched from this location and fought in the Battle of Kings Mountain in South Carolina. Known as the "Overmountain Men" these 400 volunteers marched towards South Carolina to confront the invading British army and were joined by an additional 600 recruits on their march. These men defeated the British force under Major Patrick Ferguson by surrounding his force at the Battle of Kings Mountain. This historic park is home to the Keller Interpretive Center, a small museum that offers exhibits and annual programs about the experiences of backcountry settlers in the colonial period and the American Revolution. Visitors can learn from guides and see artifacts used at the Battle of Kings Mountain This site is also the northern-most location within the 228 mile Overmountain Victory Trail-a historic trail that commemorates the actions of these rebel militiamen during the American Revolution. The trail passes through Virginia, Tenseness, North Carolina and South Carolina, following the route used by Patriot militia during the Kings Mountain Campaign of 1780. The trail includes a number of historic markers and ends at the site of the battle-an overwhelming victory that resulted in the death or capture of nearly every British soldier uner Ferguson's command. Visitors can follow parts of the trail by foot, with a variety of pathways that cover a some of the trail. There is also a commemorative route that uses existing state highways marked by the distinctive trail logo. 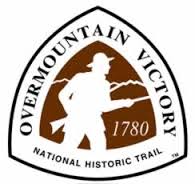 Here is an image of the trails the were traveled by the patriot militia to arrive in South Carolina. 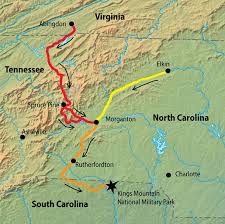 Here is an image of the Battle of Kings Mountain, between the British and the Patriots that traveled the Overmountain Victory National Historic Trail. 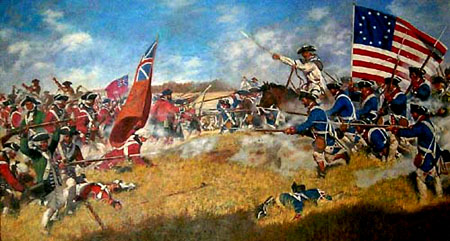 This threat did not go over well with the men of Tennessee. On September 26, 1780, they gathered at Sycamore Shoals under their leaders, Colonels William Campbell, Isaac Shelby, Charles McDowell and John Sevier. The next morning, even though icy winds and snow had settled on the mountains, they began a long hard march to find Ferguson and return his threat with fire.The trail begins in Abingdon, Virginia, and ends at Kings Mountain, South Carolina, where the Patriots vanquished the British. On Oct. 7, 1780, a group of Patriot militia from what is now Tennessee, North Carolina, South Carolina, Virginia and Georgia defeated British Major Patrick Ferguson and his band of Loyalist forces. Historians consider the Battle of Kings Mountain the "turning point of the Revolutionary War in the South," as it was the first significant Patriot victory following the demise of the Continental Army at Charleston and Camden.

Tom Gray was the marshal for Carter County, Tennessee. While he was talking up the local history of Fort Watauga and the Overmountain Men at Gap Creek Elementary School one day, he got the students excited about the commemorative march. As reported in the Johnson-City Press Chronicle by Kay Wilkins, a long-time and avid supporter of the OVT, they decided to build a monument because their school was on the historic route; but, they didn’t have much time. “The easy part was getting a couple of bags of mortar mix,” said Robert Clark, a fifth- and sixth-grade teacher, “but the hard part was gathering the rocks.” Students carried rocks from a dry creek bed behind the school to the roadside where custodian Bill Lyons volunteered his masonry skills. Without time to engrave a plaque, a poster greeted the first group of marchers in 1975. They stopped to dedicate the monument and to praise the patriotic spirit of the students. The children joined in the march for a mile before returning to their school. The following year, the first Gap Creek School monument was dismantled and reconstructed to accommodate a sizable plaque donated by the Tennessee Society, Sons of the Revolution. This time Lyons laid the foundation for the new monument and Larry Honeycutt laid the stones.

The Overmountain Victory National Historic Trail was created from the efforts of thousands of people across five states. From 1974 into 1980, they organized commemorative marches and pursued Congressional designation for the Trail. The effort began in Boone, NC at the Appalachian Consortium in 1974 as executive director Borden Mace collaborated with local writer and history buff, Rip Collins. After they enthused others about the commemorative march, a group of volunteers set off on September 26, 1975 from Sycamore Shoals in Elizabethton, TN. They were committed to walking the historic route of the Overmountain Men of 1780 all the way to Kings Mountain National Military Park in Cherokee and York counties, SC, some 130 miles away. Along with others who joined them on the way, the marchers arrived as planned on October 7. On the final day of this successful, first-year walk, the marchers were greeted in Kings Mountain, NC by Vice President Nelson Rockefeller. In September 1980, President Jimmy Carter signed into law Congressman Broyhill’s bill thus securing for the historic route the long-sought designation as the Overmountain Victory National Historic Trail. Marches have continued annually for 30 years.