In 1865, General Patrick E. Connor led the “Powder River Expedition” into this area. This expedition was a part of a broader effort to "pacify" Native tribes that lived north of the Platte River and bring them under the control of the US Government. The campaign was also aimed at stopping the attacks on settlers traveling through the region along western trails to the frontier. At this location, Conner’s command located and attacked a large party of Arapaho under Black Bear and Old David. The attack included a significant amount of hand-to-hand combat and ended with the death of many women and children and the destruction of 250 Arapaho lodges. 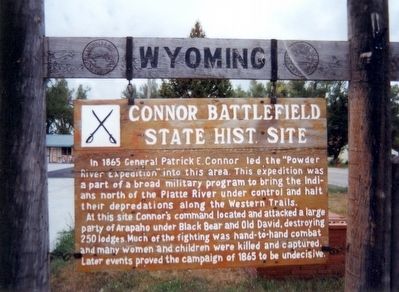 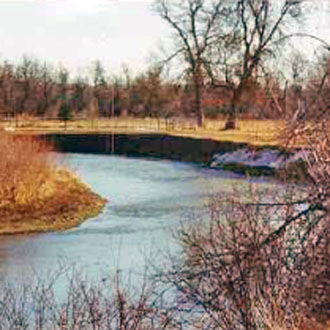 In the summer of 1865, General Patrick E. Connor led a columnn of troops from Fort Laramie into the Powder River Country of northern Wyoming. The Powder River Expedition’s mission was to make war on the Arapaho Indians in retaliation for previous attacks on settlers Connor commanded 2,500 soldiers, divided into three columnns. One columnn of 1,400 officers and men moved north along the east side of the Black Hills from the Missouri River/ A second columnn of about 600 soldiers also moved north, this time along the west side of the Black Hills from Fort Laramie. A third columnn, including Connor and about 360 troops and 95 Pawnee scouts, moved north along the North Platte River from Fort Laramie and up the Bozeman trail to the east side of the Bighorn Mountains. These troops built Fort Connor near the Powder River. On August 28th, Pawnee Scouts arrived with information of an Arapahoe village encamped on the Tongue River.

Following a night march with 250 soldiers and 80 Pawnee Scouts, Connor’s force attacked Black Bear’s Arapahoe village. The villagers were preparing to move, making it relatively easy for the soldiers to overrun the camp and push the Arapaho 10 miles from the village to Wolf Creek. The Indians fought a desperate rear guard action, protecting their families and eventually forcing the soldiers to withdraw. During this action, most soldiers remained in the village where they looted and burned the homes.

Connor and about 30 men, including 15 Pawnee, pursued the retreating Arapaho. The Arapaho counterattacked and Connor who was forced to retreat back to the village. After several days of fighting, Connor’s columnn marched back to Fort Laramie. The destruction of the Arapaho village weighed heavily on the resources of Native Americans in the area, as the survivors became a further strain on the resources of other Arapaho bands. Many of the survivors later joined the Cheyenne and Lakota tribes and continued their resistance in the coming years. The attack was a severe blow to the strength and autonomy of the Arapaho tribe, but did not secure peace in the region as many Arapaho vowed to avenge the destruction of their homes and deaths of their families.

Violence escalated following the attack, as Arapaho survivors attacked and killed Captain Osmer F. Cole of the 6th Michigan Cavalry while he was escorting the Sawyers Expedition two days after the destruction of the Arapaho village. On September 1, 1865, 100 or more Arapaho attacked the Sawyers Expedition and their 60-wagon train along the Tongue River. Lieutenant Colonel James A. Sawyers led this expedition of well-armed settlers and military escorts, but the Arapaho attack kept the wagon train in a state of siege for two weeks and led to the death of soldiers and settlers until General Connor's soldiers arrived and rescued the expedition. The effectiveness of the Arapaho attack was limited by their shortage of powder for their muskets, and many of the bullets they fired failed to penetrate the skin of either men or oxen.