This historic marker was placed at the location of the plantation of Congressman William Barksdale. A leading planter, Barksdale served in Congress from 1852 to 1861, when he joined the rest of the state's delegation in leaving Washington to support the Confederacy. Barksdale's support of violence to defend slavery began before the war, when he assisted Representative Preston Brooks in his attack against the anti-slavery Senator Charles Sumner. Barksdale served as the Quartermaster-General for the state of Mississippi. He also commanded the Mississippi Brigade at Gettysburg, a battle in which he was fatally wounded. At the time of the war, Barksdale operated a plantation at this location that enslaved 36 men, women, and children from the age of 1 to 86.

This historic marker reveals the location of Barksdale's plantation 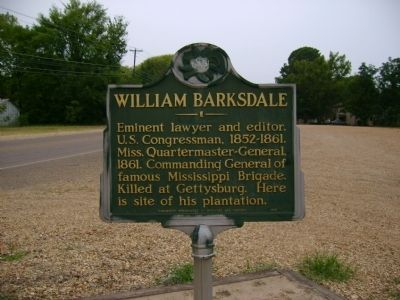 General William Barksdale. His last words were reportedly "I am killed! Tell my wife and children that I died fighting at my post." 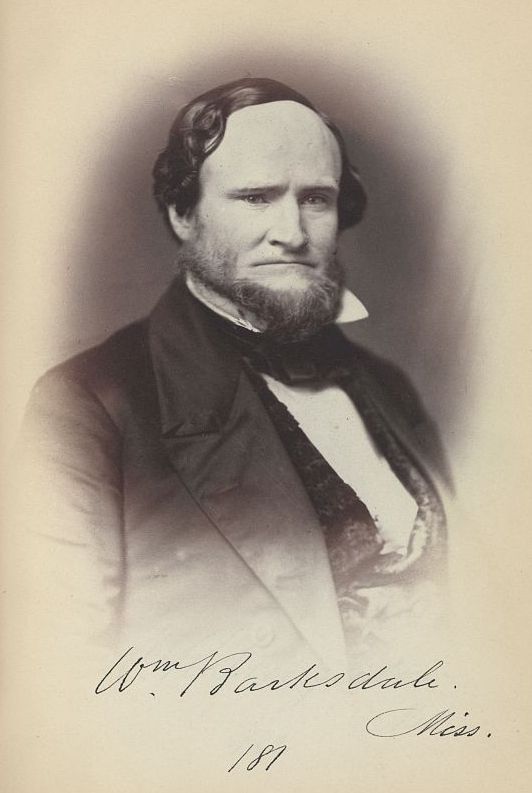 William Barksdale was born in Tennessee but is considered a true “Mississippian” in Civil War lore. Barksdale graduated from the University of Nashville and practiced law in Mississippi at the age of 21. He gave up law to become the editor of the Columbus Democrat and authored many editorials that lauded the institution of slavery. When he turned 23, Barksdale enlisted in the 2nd Mississippi Infantry Regiment, rising to the rank of Captain in the Mexican-American War.

After the war, Barksdale secured his fortune as a planter and slave owner, a status that helped him win election to the House of Representatives. He gained a reputation as an ardent defender of the doctrine of states' rights as they concerned the defense of slavery, and served in Congress from 1853 to 1861. Following the election of 1860, Barksdale declared his intention to leave the Union because Republicans were winning elections that would give them control of the White House and Congress.

When the state of Mississippi seceded, Barksdale resigned from Congress to become adjutant general, and then quartermaster general of the Mississippi Militia. He would soon be selected to become a Colonel in the Confederate States Army of the 13th Mississippi Infantry, a regiment that he led in the First Battle of Bull Run and the Battle of Ball's Bluff. When his brigade commander was mortally wounded at the Battle of Savage's Station, Barksdale appropriated command and would become known as the "Barksdale's Mississippi Brigade."

Barksdale was also involved in two of the Civil Wars’ bloodiest battles- Fredericksburg and Gettysburg. The Battle of Fredericksburg began on December 11, 1862, when Confederate soldiers would fire on Federal troops as they were building pontoon bridges to cross the Rappahannock River. Barksdale’s brigade was one of the many to join the battle, which lasted for five days and resulted in staggering casualties, 13,353 Union and 4,576 Confederate soldiers.

Gettysburg was the bloodiest battle of the Civil War with 51,000 casualties. The three-day battle fought in and around the small town of Gettysburg, Pennsylvania, along with the surrender of Vicksburg, Mississippi, became known as the turning point in the war. On the second day of the battle, Brig. Gen. William Barksdale led his brigade in an assault at the Peach Orchard. Through brutal fighting, they gained substantial ground but were eventually repelled. Leading the charge, Barksdale was shot in the foot, fell from his horse, again shot in the chest which would be the mortal wound. Barksdale’s brigade, which included the 13th, 17th, 18th, and 21st Mississippi Infantry regiments, suffered tremendous casualties. Barksdale is buried in Greenwood Cemetery in Jackson, Mississippi.

Harper's Weekly, February 2, 1861. For a more celebratory look at Barksdale's life, see One Final Charge!: The Life and Times of Mississippi's General William Barksdale by BJ Jordan. or Barksdale's Charge: The True High Tide of the Confederacy at Gettysburg, July 2, 1863 by Phillip Tucker