The Roger Williams’s Landing Place Monument is a tribute to Providence founder Roger Williams’s first landing in the Providence area around 1636. According to legend, this monument stands at the place where Williams, who was recently exiled from the Plymouth Colony, and a few of his followers first stepped ashore the to-be Providence colony. Upon arrival, the gang was met by a group of the friendly Narragansett tribe, who greeted the colonists with the phrase, “"What cheer, netop?" — which meant, “What’s up, bud?” The Narragansett leaders advised Williams and his crew to continue down the Seekonk River, where they could find a suitable place to live. The newfound settlement would eventually become Providence, and the second landing spot down the Seekonk would eventually become the Roger Williams National Memorial. The story of Roger Williams’s arrival (and the monument that was built there in 1906) was designed to mirror the Plymouth Rock landing at Plymouth Colony, and for some time, Williams’s landing held greater popularity. At the same time, however, some historians discredit the story of Williams’s landing. In fact, some believe that he never stepped on land when he met the Narragansett but instead yelled from his canoe. 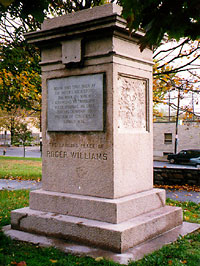 Inscription on the Landing Place Monument 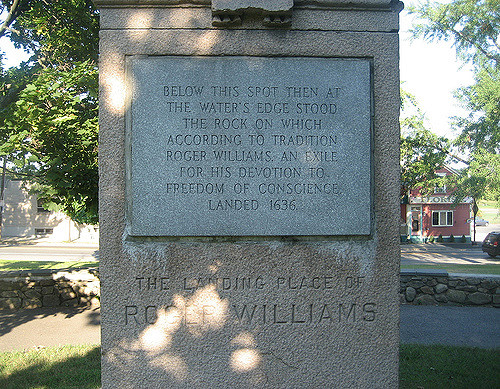 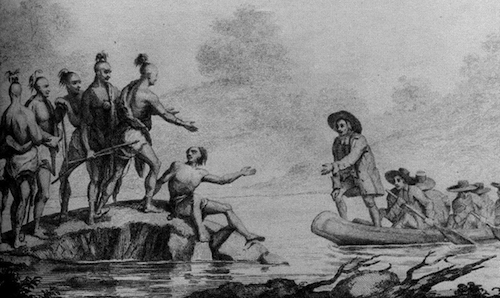 Roger Williams’s and his company of Puritan settlers had been forced to leave their original Rumford settlement in 1636 after they learned that the land around Rumford belonged to the Plymouth Colony. Because Williams’s was a wanted man in the powerful Massachusetts colony (he was convicted of sedition and heresy in 1635), Williams and his friends packed their belongings into a single canoe and embarked on the Seekonk River. On the western side of the River, Williams was greeted by the Narragansett tribe. Williams stepped from the canoe onto Slate Rock, at the present site of the Landing Place Monument. Following the directions of the Narragansett tribal leaders, Williams and his crew continued down the Seekonk, headed into a small cove, and began a new colony (which would eventually become Providence).

This entire episode between Williams and the Narragansett tribe was first recorded in 1821, and it was based on oral, third-hand accounts. Some accounts stated that, because Slate Rock was well protected from the waters on the shoreline, the initials of the landing party should have been carved into the rock. Unfortunately, in 1877, Providence city workers used too much dynamite while trying to uncover more of Slate Rock and destroyed most of it. Pieces of Slate Rock, however, can be found in the Central Baptist Church and just inside Brown University’s Waterman Avenue gates. Pieces of Slate Rock were also sold in a catalog at a price of ten cents to $2.50 per chunk.

Like Plymouth Rock (which also has conflicting evidence of being the “first” landing site and being a landing site altogether), the Roger Williams’s Landing Place has little evidence backing its story. Nonetheless, the story is fundamental to Providence history. As such, the present-day monument was built in 1906 by sculptor E.C. Codman and designer Frank Foster, with the plaques cast by the Gorham Manufacturing Company.