Weybosset Bridge was he first bridge over the Providence River, constructed in 1660 in place of a ford crossing. This first bridge connected Weybosset Neck and the path leading to the Pequot lands in Connecticut. This historical marker offers a concise history of the former bridge which was destroyed and rebuilt at least seven times in its history. By 1940, expansions to the bridge had led to a width of 1,147 feet, the widest bridge in the world at the time, according to the Guinness Book of World Records. In 1984, the bridge size was reduced to improve the river and shoreline. 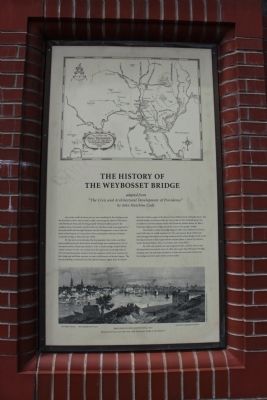 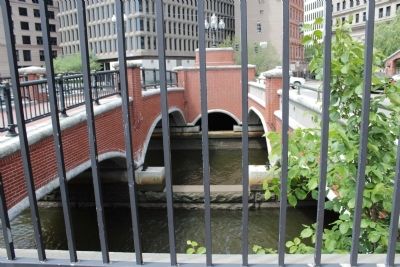 The first bridge was poorly constructed and fell into disrepair by the late 1670s, so the townspeople and their livestock reverted to fording the river until 1711, when a second bridge was built at the same location. The second bridge fell victim to a flood in 1719; the fourth to a gale and high tides in 1761. In order to allow square-rigged ships carrying West Indies cargo to reach the Bowen Street Wharf, a drawbridge was built at the Weybosset Bridge site in 1764. The seventh bridge was destroyed in another gale in 1815, and was replaced by a fixed bridge the following year (preventing sea-faring vessels from entering the cove).

By 1940, expansions to the bridge had led to a width of 1,147 feet, the widest bridge in the world at the time, according to the Guinness Book of World Records. In 1984, the bridge size was reduced to improve the river and shoreline.

The History of The Weybosset Bridge

Just to the north of where you are now standing the first bridge across the Providence River was erected in 1660, connecting the shore of the Neck with Weybosset Neck and the Pequot path which provided access to the meadow lands. Previously, a ford in the river had been used as an approach to that path which led through Pawtuxet and the Narragansett country into the lands of the Pequots in Connecticut. Poor construction and lack of repairs caused the bridge to fail in the late 1670's.

For the next several decades the townspeople, their cattle, and their teams waded across the ford until a second bridge was constructed in 1711. It was destroyed by a flood and rebuilt in 1719. A fourth bridge, funded by the colony's lottery in 1745, was carried away by a gale and record high tides in 1761. During those years, farmers from the meadows to the west crossed over the bridge and sold their produce in what is still known as Market Square. The first drawbridge, constructed in 1764, allowed square rigged ships to unload their West Indies cargoes at the Bowen Street Wharf north of Steeple Street. The seventh bridge was destroyed by the great gale of 1815; its flood waters are recorded on a bronze plaque on the wall of nearby Market House.

In 1816 a fixed type replacement closed the cove to "sea going" vessels.

The trend to widen the bridge began in 1843 and continued in earnest until 1940 when its width reached 1147 feet and Guinness Book of Records acknowledged Providence as having constructed the widest bridge in the world. During its history it has supported two market places, Central Fire Station, Union Railroad Depot, Horse Car Depot, and a post office.

By 1983 only parked cars and congested traffic could be seen on the decking which covered the river. In 1984, after more than 300 years of bridge building, the city and state decided to reclaim the rivers and constructed the bridges and river park which are here today.