Runestone Museum and the Kensington Runestone

The Kensintone Runestone is a controversial and enigmatic piece of Minnesotan and Scandinavian heritage. The stone slab was discovered in 1898 buried under a tree on a remote Minnesotan farm in Douglas County, and was allegedly found covered in 14th century Norse runes. Since its discovery, the stone has been the centre of a series of global popular and academic arguments regarding its authenticity. There has not yet been any consensus as to whether this is a 14th century artefact or 19th century forgery – other than that it is certainly not by pre-11th century Vikings. Today, the stone can be seen in the Runestone Museum in Alexandria, Minnesota.

Olof Ohman with the stone (www.uniquelyminnesota.com) 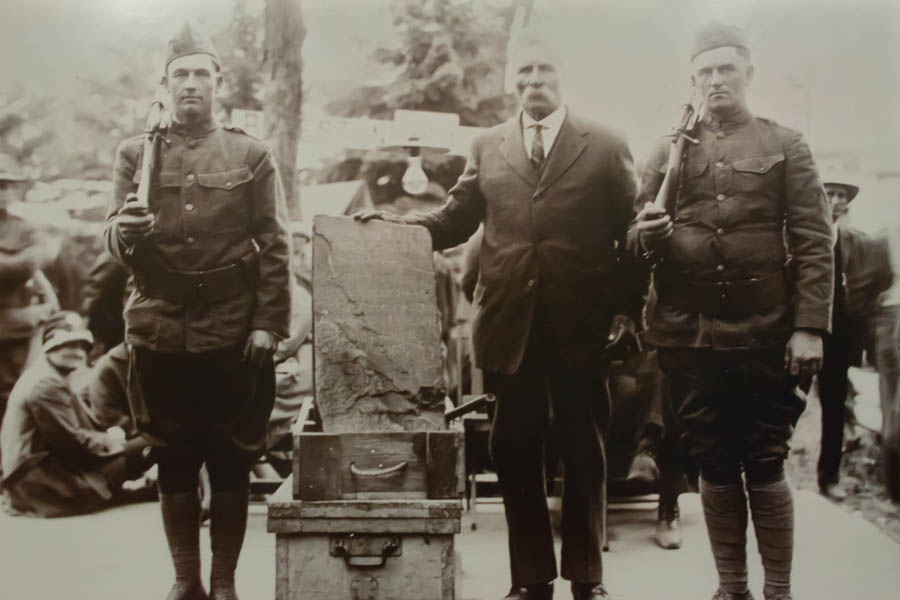 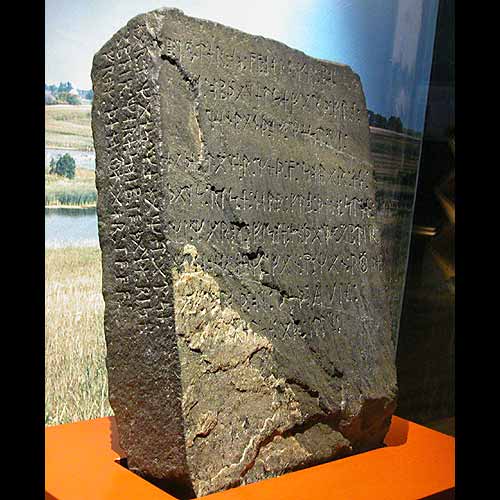 The stone has become an inextricable part of local identity, as indicated by the enormous Viking that greets visitors to Alexandria (www.postcardy.blogspot.com) 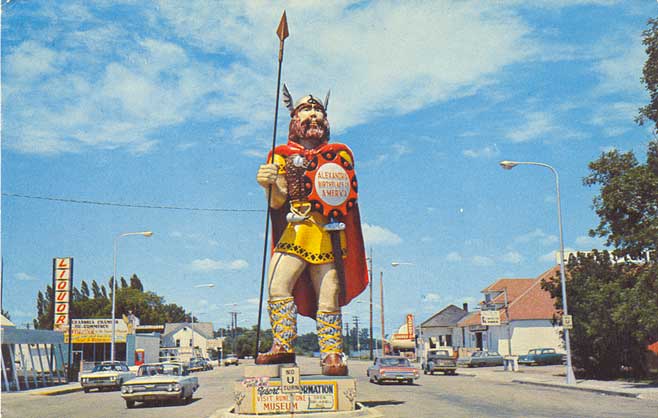 In 1898 the Swedish immigrant farmer Olof Ohman allegedly uncovered a buried stone slab when working around an old tree with his ten year old son. They pulled it from the earth to find it covered in more than two hundred strange letters, first believed to have been either Native American or Greek. The stone was examined by University of Minnesota academics, who concluded that linguistic errors in the translated Old Norse text showed that the stone was a contemporary hoax. Quite irked, Olof deposited it in an outhouse and for a number of years used it to straighten out bent nails with a hammer.

In 1907 the Norwegian-born Wisconsin-based historian Hjalmar Rued Holand purchased the stone from Olof. He embarked on a hunt for evidence to support the stone’s authenticity as a medieval Scandinavian artefact. Three years later, he had amassed enough support from academics for a report by the Minnesota Historical Society to claim that the stone might, in fact, be considered authentic.  In 1948 the stone was displayed in the Smithsonian Institution in Washington. Between the 1950s and 1970s the general opinion swung the other way, as scholars renewed arguments of the stone as a forgery made by a member of the Douglas County community. However, from the 1980s various respected linguists and scholars have concluded that the stone could, after all, be considered genuine. New suggestions have been proposed over the past decade, including that of Minnesota attorney, Thomas Reiersgord, who maintains that it could have been brought by Scandinavian explorers and monks in the early days of the Midwest’s colonisation. Geological studies indicate that the stone had been uncovered and weathered for at least two hundred years before its recovery in 1898 – thus suggesting that it must have been in the open air for at least two centuries sometime in the past.

Despite (or because of) these controversies, the stone has acquired significant heritage value for both local Minnesotan communities and many groups in present-day Scandinavia. New research will certainly emerge over the coming years, and there will doubtlessly never be a single neat narrative into which the stone fits. The farm on which it was discovered is now a park and heritage site, with a memorial marking the location in which it was found.