Roswell is home to the largest Memorial Day Ceremony in Georgia, as well as this brick and bronze Vietnam War memorial. The memorial was erected to honor the men and women who served in the armed forces during the Vietnam War by a committee that hoped to include medics and civilians. The Roswell Vietnam War Memorial is sometimes known as “The Faces of War” owing to its emphasis upon Vietnamese citizens. Visitors can see their own face due in the monument as the look at the faces of fifty soldiers and civilians-an effect caused by the waterfall that cascades over the monument. 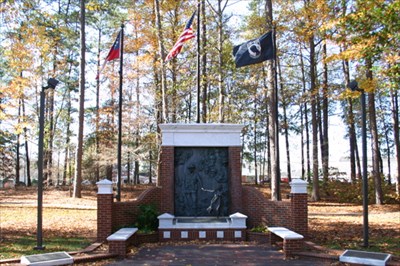 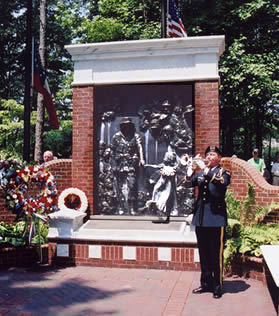 Standing fourteen feet high and twenty feet wide, the monument is accented with appropriately incorporated Georgia marble capstones accenting old colonial bricks.  The wall of the monument contains 50 sculpted faces cast from bronze.  Each face shows a different type of emotion; fear, grief, and courage.  The faces are representative of servicemen and women who served in the Vietnam War, along with medical personnel and Vietnamese citizens.  Poignantly in the foreground of the sculpture is a life-size figure of a serviceman stepping forward, as if he is emerging from the sculpture itself, with his arm stretched out, reaching for the hand of a little girl who is a three-dimensional statue standing separate from the wall.  The memorial is completed with a sheer waterfall cascading over the faces so that the observer will see their own reflection among those who went to battle.

“The Faces of War-heroic and tragic
Faces of the past held present in our memories
Faces of soldiers and civilians – men, women, children of all ages, all colors

Located in Roswell’s Municipal Park, adjacent to Roswell City Hall, the monument plays host to one of the largest Memorial Day celebrations in the state.  Dedicated in 1998, the monument became the location of the Annual Roswell Memorial Day Ceremony.  This ceremony was officially named the “Roswell Remembers” ceremony in 2002.  Attendance has grown since the 1,800 in 1998 to 6,000 to 7,000 today.  Through the years military dignitaries have been guest speakers at this event.  Speakers have included Brigadier General Paul Tibbets who piloted the B-29 plane named Enola Gay who dropped the first atomic bomb on Hiroshima.  Some ceremonies honored soldiers who lost their lives at such pivotal battles such as Normandy and Pearl Harbor.  Survivors of these battles attended and shared their personal stories with the crowds.

Sculpted by Atlanta sculptor Don Haugen, one of Georgia’s most notable sculptors of his time, the lucid rendering of the human emotion depicted on the 50 faces touches those who experience such a monumental memorial.  The monument is located behind the City Hall building, along a wooded path. The monument continues to attract many visitors who are paying tribute to the bravery of men and women of the armed forces.