Built by the French in 1761 on what is no the northeast corner of Toulouse and Decatur, Government House served as the headquarters of the French colonial government until 1769, when the Spanish took control of the area. The Spanish governor lived at this house until the United States acquired control of the city as part of the Louisiana Purchase in 1803. The first territorial legislature met here at Government House, as did the Louisiana Supreme Court, which held sessions at Government house from March 1813 until 1818. The building escaped serious damage in two fires in the late 1700s but was destroyed by a fire in 1828.

Late 18th sketch of building when it served as the French Government House. Courtesy of the Louisiana State Museum 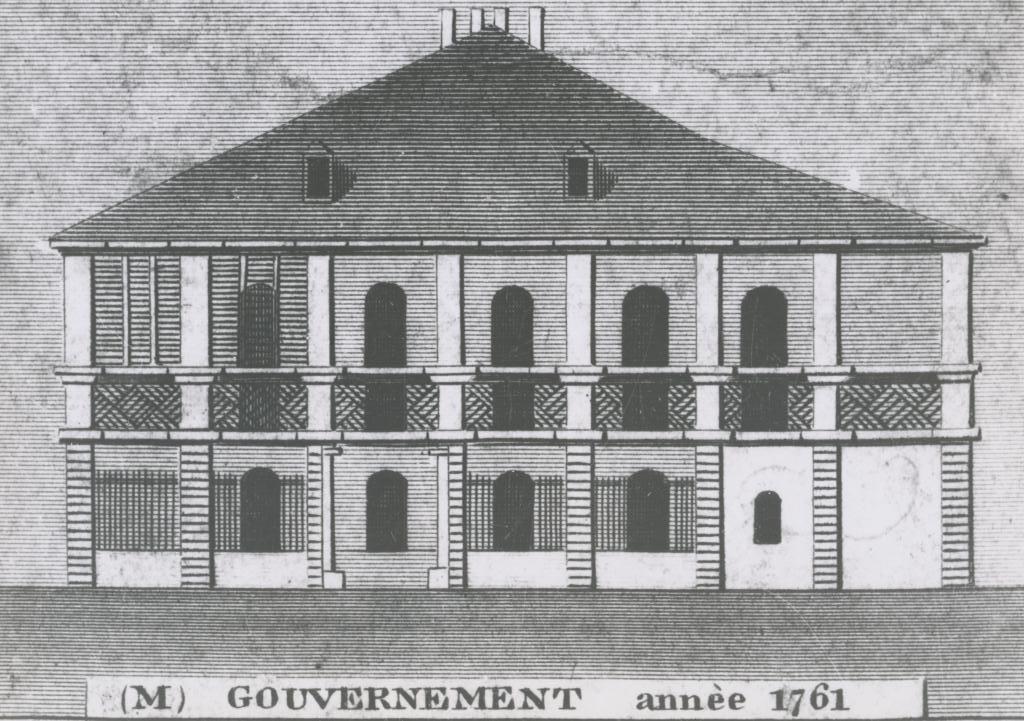 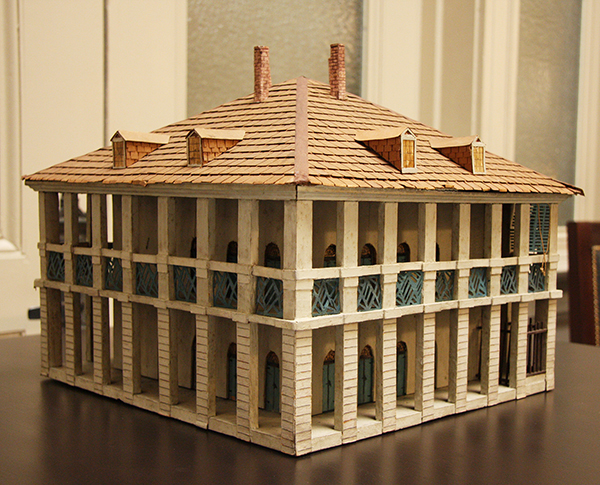 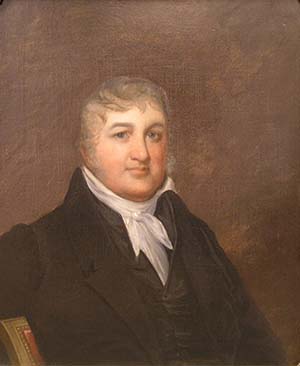 Article from the Boston Traveler describing the 1828 fire. The fire at a dry goods store next to the Government House brought the first seat of Louisiana's Supreme Court to an untimely end. Boston Traveler, February 26, 1828. 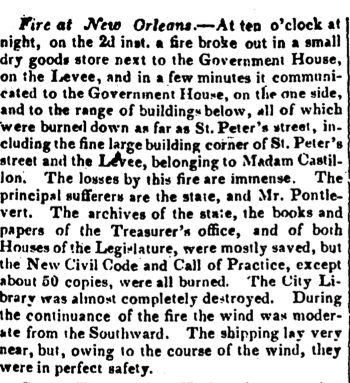 A large, raised building with covered galleries extending along the sides, Government House occupied 220 feet on the Mississippi River and extended 330 feet to the next street. In an 1885 Guide to New Orleans, Government House was described as “a plain residence of one story, with the aspect of an inn. It fronted the river. One side was bordered by a narrow and unpretending garden in the form of a parterre, and on the other side ran a low gallery screened by latticework, while the back yard, inclosed [sic] by fences, contained the kitchens and the stables.”

“Placing their desire for stable, consistent justice above their parochial concerns, Louisiana’s early lawyers and judges blended civilian and American principles of law in a distinctively American court system. The Louisiana Constitution of 1812 created a state judiciary that represented the reconciliation of civil and common law traditions,” according to "A Brief History of the Supreme Court."

According to the official minutes, the Court adjourned that first day after Judges Hall and Mathews produced their commissions. Judge Pierre Derbigny joined the bench the following week. Of the three judges, only Judge Derbigny had no prior judicial training.

On March 2, 1813, the Court admitted seven lawyers to practice, including Francois Xavier Martin, who became a Supreme Court judge two years later in 1815, Edward Livingston, and John Grymes. The Court met for six days the first week, including Saturday, according to the Court’s official minutes.

The Supreme Court heard its first case on March 11, 1813, an appeal from the territorial Superior Court. Four days later, the Court ruled that it lacked jurisdiction over cases decided in the territorial Superior Court, those decisions being final and irrevocable. By this ruling, the Louisiana Supreme Court permitted itself to create new law and not be bound by prior cases.

Having survived the Battle of New Orleans, in February 1828, Government House burned down after a fire broke out in a small dry goods store located next door. According to an 1828 newspaper account, the new Civil Code and the Code of Practice, except about 50 copies, were destroyed in the fire."

When a rumor circulated that the legislature intended to surrender the city to the French during the War of 1812, General Andrew Jackson is said to have threatened to attack Government House.