Fort Garland, “the gateway to the San Luis Valley,” is a place where histories of freedom and oppression entwine. Union soldiers stationed at the fort during the Civil War helped end the conflict in the west, and after the war the fort hosted all-Black regiments for whom military service was a form of (limited, racialized, and gendered) mobility. But the fort’s principal purpose was to secure the San Luis Valley, recently ceded to the United States after the Mexican-American War, for Anglo settlement. This meant the forced removal of the Ute Tribes, who had inhabited the valley for centuries. By 1883, 25 years after the army occupied the fort in 1868, this purpose had been fulfilled, and the army left the fort, which fell into disrepair until the Colorado Historical Society began restorations in 1945.

Exhibit at museum - soldiers in battle 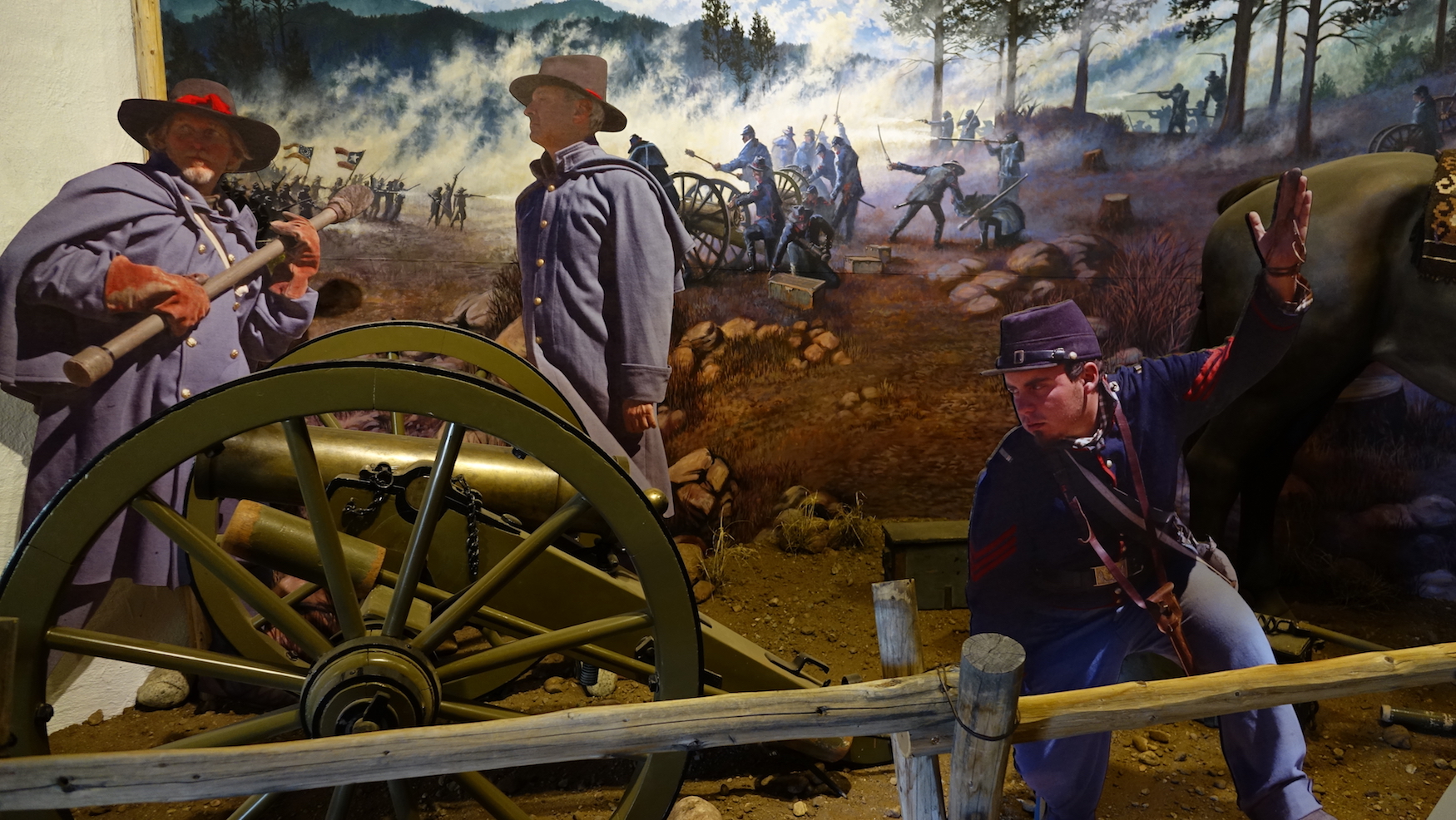 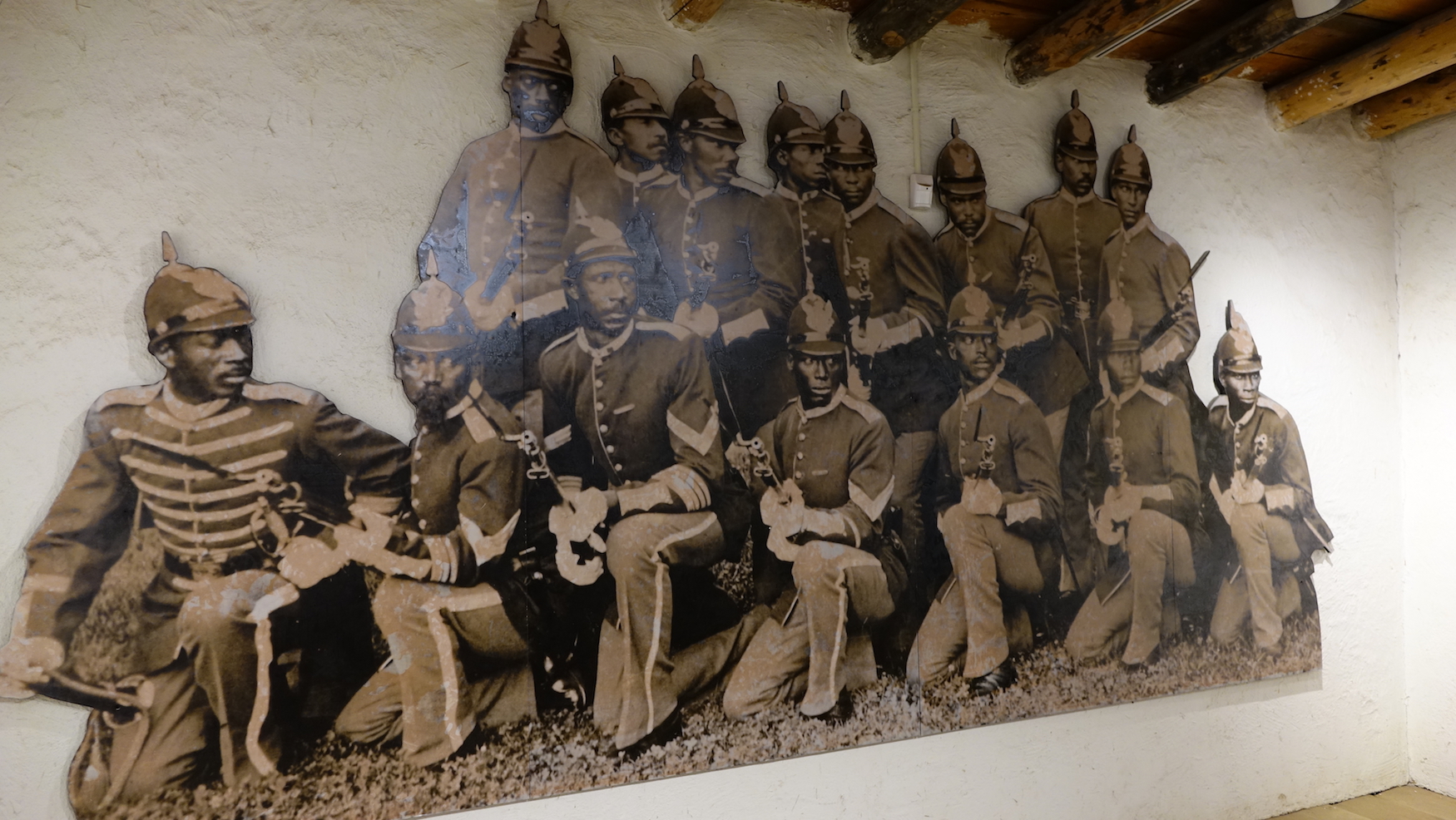 This map of the Denver & Rio Grande Railway was created in 1881. In addition to rail lines, it shows the mining regions, towns, and military forts, including Fort Garland (to the right of Alamosa). 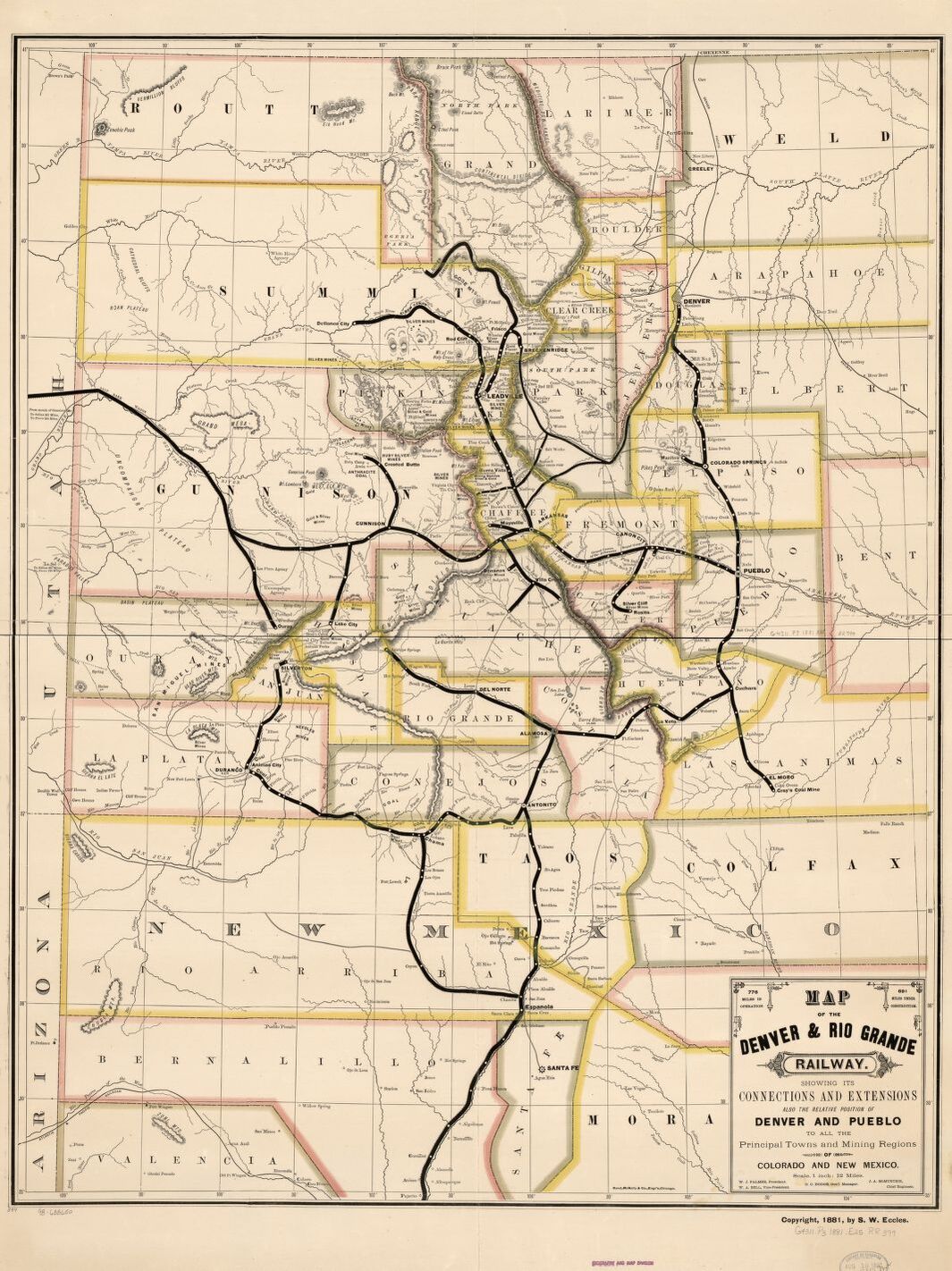 This photograph of Fort Garland was part of a series taken by Timothy O'Sullivan in the early 1870s. O'Sullivan was part of an Army Corps of Engineers expedition, one of many that surveyed new U.S. territories to gather information about them that would be useful in settling and defending them. Expeditions like this highlight the connections between knowledge production and U.S. expansion, with everything that entailed.

Set against a backdrop of soaring mountains and gray-green scrub brush, the carefully-restored adobe buildings of Fort Garland hark back to a time when ideas of “Manifest Destiny” and “frontier democracy” caught hold of public opinion. [1] The words “Manifest Destiny” evoke sprawling westward expansion: the Louisiana Purchase of 1803; the annexation of Texas in 1845; the Treaty of Guadalupe Hidalgo in 1848; and the leap from continental North America to insular possessions in the Pacific (Hawai‘i, Guam, the Philippines). But the implication that this process of rapid territorial accumulation and Anglo settlement was foreordained—as the word “destiny” connotes—obscures how uncertain and fraught U.S. expansion really was. [2] Military institutions like Fort Garland highlight the lengths to which the federal government had to go to “secure” new territories and make white settlement possible. The story of the fort’s creation, use by the military, and abandonment just 25 years after construction illustrate the ways expansion was a violent, contested, and contingent process.

After the end of the Mexican-American War and the signing of the Treaty of Guadalupe Hidalgo in 1848, the U.S. government sought to secure its new territories and open them to white settlement. To do so would encroach on lands long occupied by indigenous peoples, namely the Utes, who resisted the press of Anglo settlers onto their land (hence the need, in the eyes of the government and military, for an army garrison). In 1849, the Utes signed a peace treaty with the U.S. government in which they acknowledged U.S. sovereignty and established the boundaries between the Ute Nation and the United States. [3] Over the next thirty years, those boundaries would be eroded by treaty and by violence as the Ute people were forcibly removed from their lands to smaller and smaller reservations—a removal in which Fort Garland would play a significant part.

In 1852, the military staked its claim to the southern Colorado borderlands with Fort Massachusetts. It quickly became apparent, however, that the fort was vulnerable to attack and could not protect white settlers, so the army began to look for alternative sites. At the time, Charles Beaubien owned much of the land in the San Luis Valley. [4] The U.S. Army leased land from Beaubien to build Fort Garland, paying him one dollar per year for 25 years. [5] During those 25 years, soldiers stationed at Fort Garland were part of a concerted effort to eliminate opposition to Anglo settlement of the San Luis Valley and the unfettered exploitation of the area’s rich mineral resources. These efforts moved between peaceful (though often fraudulent) treaties and bloody conflict.

In 1879, tensions between the Utes and whites came to a head during the Meeker Incident: Nathan Meeker, an Indian Agent, tried to coerce the Utes into radically changing their way of life and abandoning their culture and livelihood; he called in federal troops to patrol Ute lands. [6] The Utes responded by attacking him and ten others. Colorado settlers, enraged, rallied around the call “The Utes must go!” and in 1880, soldiers from Fort Garland assisted with the removal of the Ute people to reservations in Utah and Colorado near the New Mexico border. [7] Settler public opinion was so set against the Utes that when the Ute Chief Douglas was moved from Leavenworth, Kansas, to Fort Garland, the Secretary of the Interior feared for the Chief’s life. [8]

Three years later, in 1883, the fort was decommissioned. The lease with Beaubien had expired and land was now far more expensive than the old dollar-a-year price; anyway, Fort Garland had fulfilled its purpose. The Denver-Rio Grande Railroad was snaking through the region, linking its growing mining industry more tightly to the national economy. As the Utes’ hold on their lands became more tenuous and their position more precarious, settlers felt their lives to be more secure. The fort, abandoned by the army, fell into disuse and passed through several owners’ hands before its acquisition by the Colorado Historical Society in 1945. Today, only five of the original twenty-two buildings survive.

Though only operational for 25 years, Fort Garland connects, in one way or another, to many threads in the history of the Southwest. It is a physical marker of the conflictual and uncertain course of U.S. expansion and a testament to the role of military force in removing indigenous peoples to make way for Anglo settlement and exploitation of natural resources. It is also a site where racialized differences were challenged: for a time, it was home to the Buffalo Soldiers, members of all-Black regiments in the segregated military. Though the existence of these separate regiments is indicative of the discrimination these soldiers faced, military service, especially in the west, was a way to partially escape the United States’ racial caste system: for these soldiers, “military service represented a distinct kind of border area—the boundary between enslaved person and freedman.” [9] Nonetheless, this partial freedom was conditioned on the entrenchment of Native American subjugation—a powerful example of the ways freedom and oppression were entwined at Fort Garland, and in the borderlands it was meant to control. A visit to what remains of this garrison can be a moment to reflect on the many meanings of this place to the different people that have passed through it, and the many borderlands, whether geographic, racial, legal, or otherwise, that they have inhabited.