Founded as the Medical College of Louisiana in 1834, Tulane is a private university and member of the Association of American Universities. By 1847, it had expanded from a public medical college to a multi-faceted university. It became Tulane University when it reopened following its closure during the Civil War. 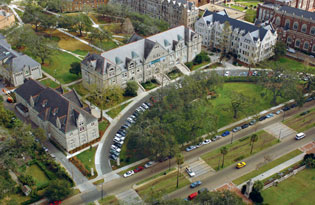 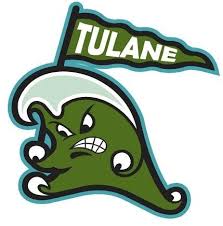 Josephine Louise Newcomb, philanthropist whose donations led to the founding of Newcomb College at Tulane University 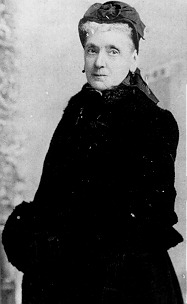 Paul Tulane, eponymous philanthropist of the school and the university's namesake

Jones Hall, where the School of Law was located from 1969 until 1995. It now acts as a Special Collections library and houses Classical Studies, Jewish Studies, and Stone Center for Latin American Studies. 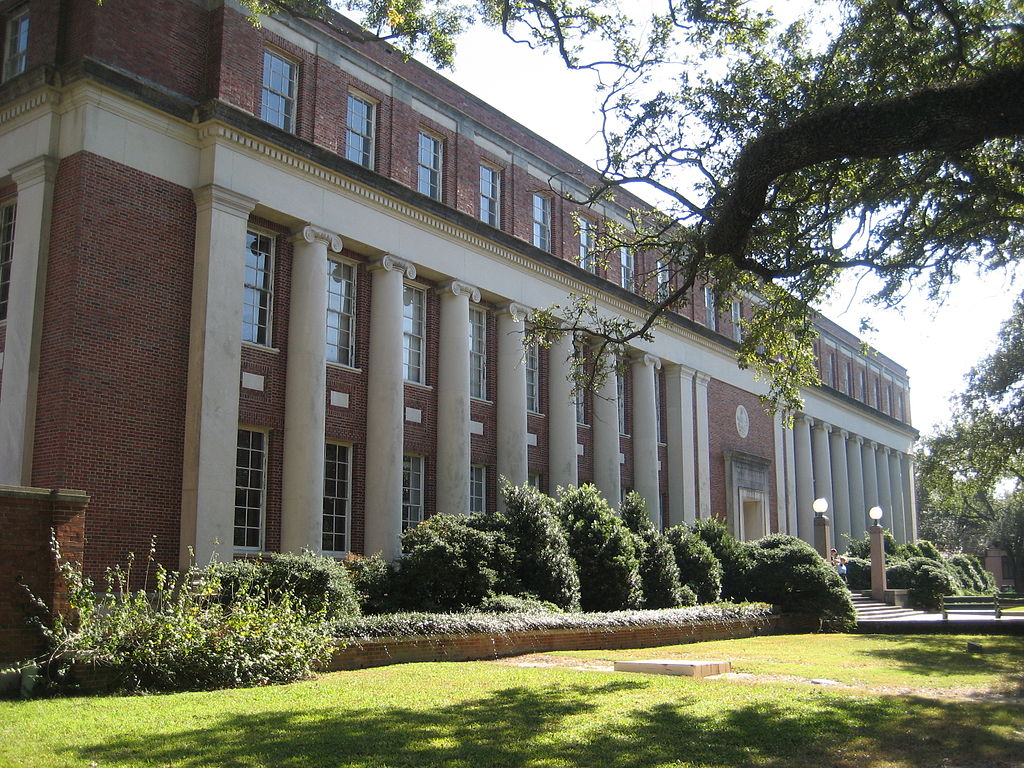 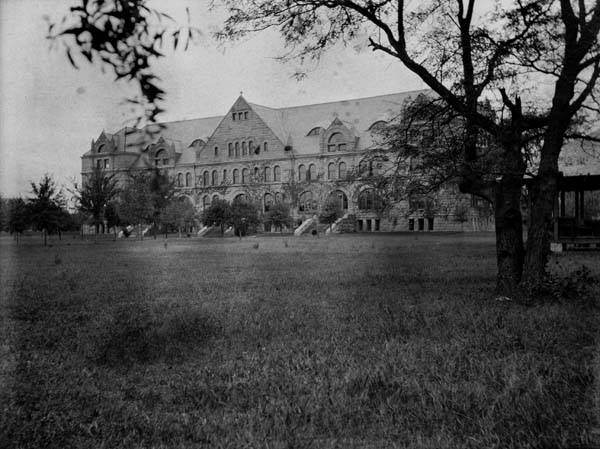 Gibson Hall as it looks today. This is the university's famous landmark 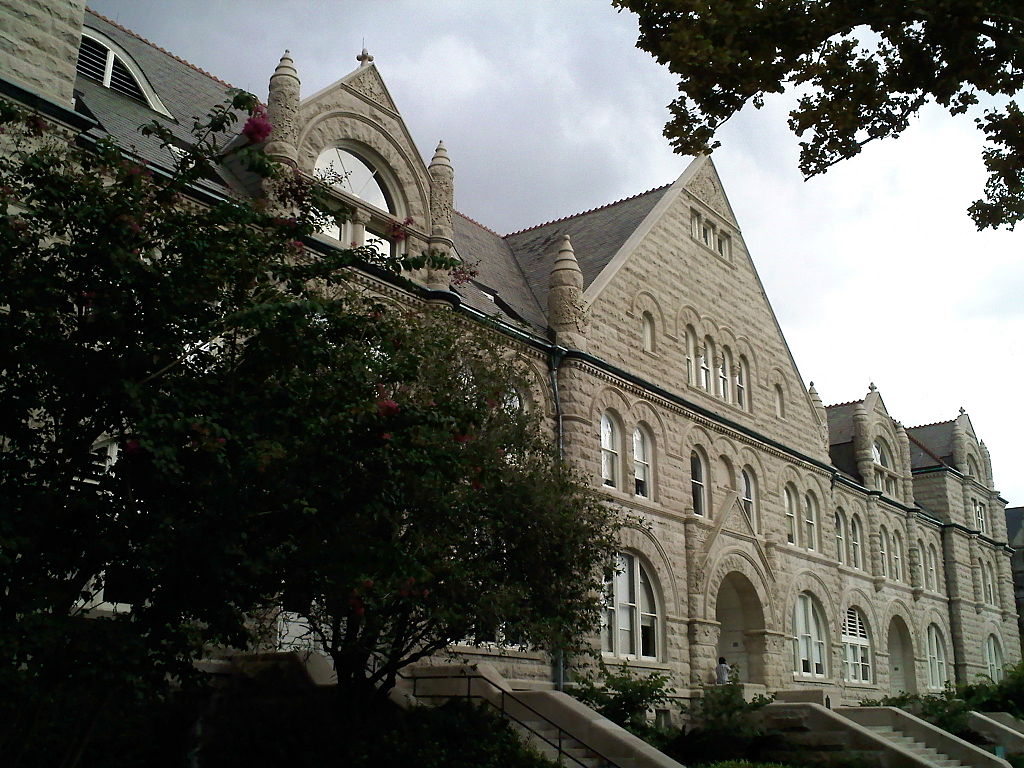 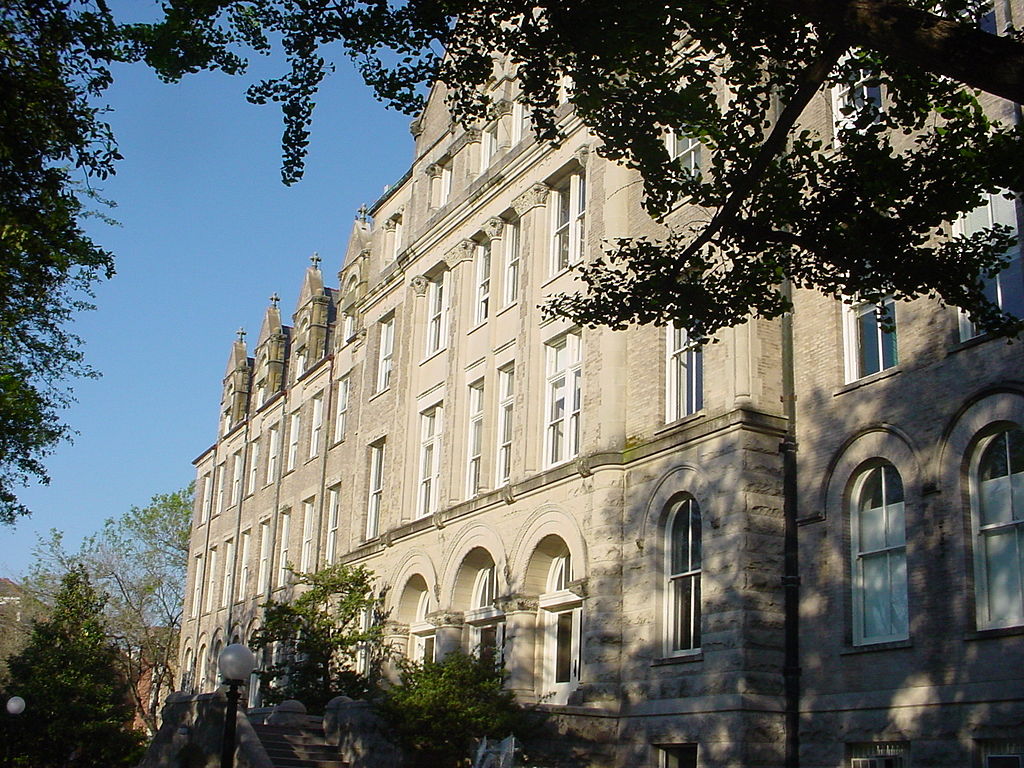 Tilton Memorial Hall, home to the Departments of Economics and Political Economy. 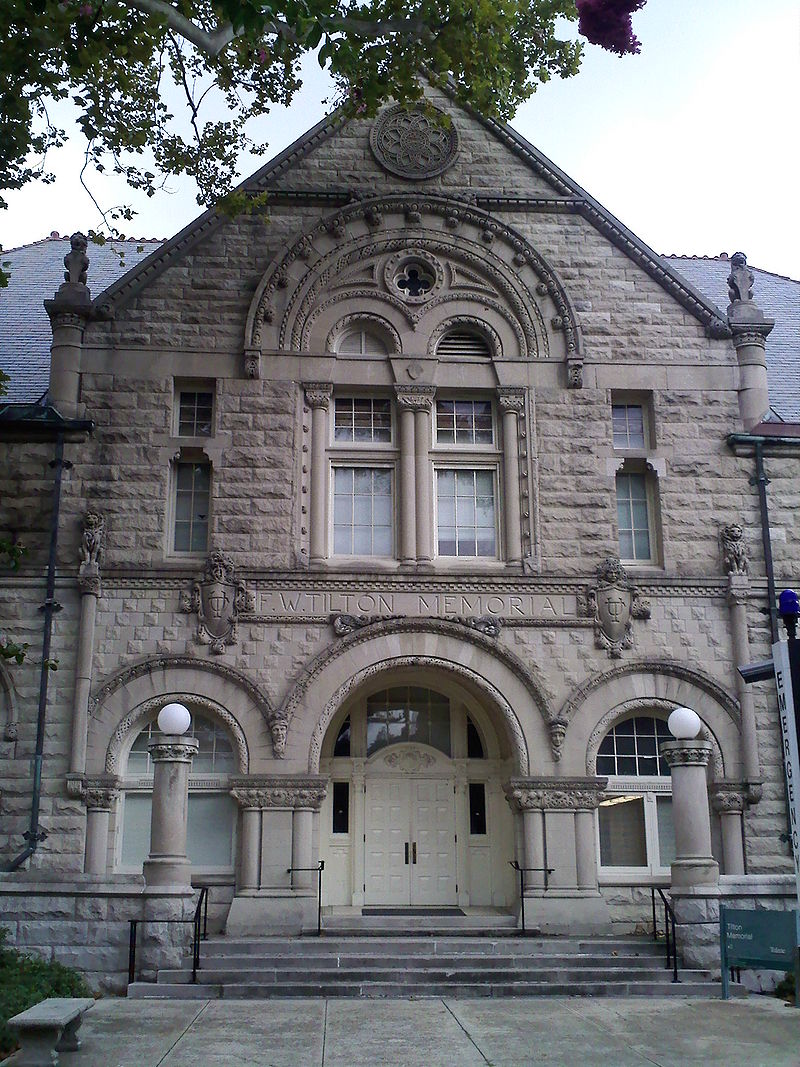 When the Medical College of Louisiana was opened it became the second medical school in the South and the fifteenth in the United States. It was created in part as a response to outbreaks of smallpox, yellow fever, and cholera. A law department was added to the school in 1847 and it was renamed the University of Louisiana. An endowment by Paul Tulane, a businessman dealing in dried goods and clothing, privatized the institution in 1884. In 1886, an endowment from Josephine Louise Newcomb, a Baltimore native and philanthropist, established the H. Sophie Newcomb Memorial College, a women’s college within Tulane University.

Tulane has been a large part of Louisiana’s history well into the twenty-first century. In 1907, the university developed a program that would later become the Tulane School of Architecture. In 1927, the South’s first School of Social Work was established at the university. Tulane was also on of 131 institution of higher learning that partook in the V-12 Navy College Training Program. The V-12 Navy College Training Program was designed to offer students the opportunity to become commissioned in the Navy. It began on July 1, 1943 and ended on June 30, 1946. The university closed for the second time in its history, the first time being during the Civil War, following the August 2005 Hurricane Katrina. Tulane’s campus and surrounding area’s suffered significant damage from the storm. The Howard-Tilton Memorial Library was flooded with waters rising higher than eight feet. The 19th century Howard Collection was lost in the flood.

The university was founded as the Medical College of Louisiana in 1834 partly as a response to the fears of smallpox, yellow fever, and cholera in the United States. The university became only the second medical school in the South, and the 15th in the United States at the time. In 1847, the state legislature established the school as the University of Louisiana, a public university, and the law department was added to the university. Subsequently, in 1851, the university established its first academic department. The first president chosen for the new university was Francis Lister Hawks, an Episcopalian priest and prominent citizen of New Orleans at the time.

The university was closed from 1861 to 1865 during the American Civil War. After reopening, it went through a period of financial challenges because of an extended agricultural depression in the South which affected the nation's economy. Paul Tulane, owner of a prospering dry goods and clothing business, donated extensive real estate within New Orleans for the support of education. This donation led to the establishment of a Tulane Educational Fund (TEF), whose board of administrators sought to support the University of Louisiana instead of establishing a new university. In response, through the influence of former Confederate general Randall Lee Gibson, the Louisiana state legislature transferred control of the University of Louisiana to the administrators of the TEF in 1884. This act created the Tulane University of Louisiana. The university was privatized, and is one of only a few American universities to be converted from a state public institution to a private one.

In 1884, William Preston Johnston became the first president of Tulane. He had succeeded Robert E. Lee as president of Washington and Lee University after Lee's death. He had moved to Louisiana and become president of Louisiana State University. In 1885, the university established its graduate division, later becoming the Graduate School. One year later, gifts from Josephine Louise Newcomb totaling over $3.6 million, led to the establishment of the H. Sophie Newcomb Memorial College within Tulane University. Newcomb was the first coordinate college for women in the United States and became a model for such institutions as Pembroke College and Barnard College. In 1894 the College of Technology formed, which would later become the School of Engineering. In the same year, the university moved to its present-day uptown campus on historic St. Charles Avenue, five miles by streetcar from downtown New Orleans.

With the improvements to Tulane University in the late 19th century, Tulane had a firm foundation to build upon as the premier university of the Deep South and continued this legacy with growth in the 20th century. In 1901, the first cornerstone was laid for the F.W. Tilton Library, endowed by New Orleans businessman and philanthropist Frederick William Tilton (1821–1890). During 1907, the school established a four-year professional curriculum in architecture through the College of Technology, growing eventually into the Tulane School of Architecture. One year later, Schools of Dentistry and Pharmacy were established, albeit temporarily. The School of Dentistry ended in 1928, and Pharmacy six years later. In 1914, Tulane established a College of Commerce, the first business school in the South. In 1925, Tulane established the independent Graduate School. Two years later, the university set up a School of Social Work, also the first in the southern United States. Tulane was instrumental in promoting the arts in New Orleans and the South in establishing the Newcomb School of Art with William Woodward as director, thus establishing the renowned Newcomb Pottery. The Middle American Research Institute was established in 1925 at Tulane.

University College was established in 1942 as Tulane's division of continuing education. By 1950, the School of Architecture had grown out of Engineering into an independent school. In 1958, the university was elected to the Association of American Universities, an organization consisting of 62 of the leading research universities in North America. The School of Public Health and Tropical Medicine again became independent from the School of Medicine in 1967. It was established in 1912. Tulane's School of Tropical Medicine also remains the only one of its kind in the country. On April 23, 1975, President Gerald R. Ford, Jr., spoke at Tulane University's Fogelman Arena at the invitation of Congressman F. Edward Hebert, a representative of Louisiana's 1st Congressional District. During the historic speech, Ford announced that the Vietnam War was "finished as far as America is concerned" – one week before the fall of Saigon. Ford drew parallels to the Battle of New Orleans, saying that such positive activity could do for America's morale what the battle did in 1815.

During World War II, Tulane was one of 131 colleges and universities nationally that took part in the V-12 Navy College Training Program which offered students a path to a Navy commission.A detailed account of the history of Tulane University from its founding through 1965 was published by Dyer. In July 2004, Tulane received two $30-million donations to its endowment, the largest individual or combined gifts in the university's history. The donations came from Jim Clark, a member of the university's board of trustees and founder of Netscape, and David Filo, a graduate of its School of Engineering and co-founder of Yahoo!. A fund-raising campaign called "Promise & Distinction" raised $730.6 million by October 3, 2008, increasing the university's total endowment to more than $1.1 billion.

As a result of Hurricane Katrina in August 2005 and its damaging effects on New Orleans, most of the university was closed for the second time in its history—the first being during the Civil War. The closing affected the first semester of the school calendar year. The School of Public Health and Tropical Medicine's distance learning programs and courses stayed active. The School of Medicine relocated to Houston, Texas for a year. Aside from student athletes attending college classes together on the same campuses, most undergraduate and graduate students dispersed to campuses throughout the U.S. The storm inflicted more than $650 million in damages to the university, with some of the greatest losses impacting the Howard-Tilton Memorial Library and its collections.

Facing a budget shortfall, the Board of Administrators announced a "Renewal Plan" in December 2005 to reduce its annual operating budget and create a "student-centric" campus. Addressing the school's commitment to New Orleans, a course credit involving "service learning" became a requirement for an undergraduate degree. In 2006 Tulane became the first Carnegie ranked "high research activity" institution to have an undergraduate public service graduation requirement. In May 2006, graduation ceremonies included commencement speakers former Presidents George H. W. Bush and Bill Clinton, who commended the students for their desire to return to Tulane and serve New Orleans in its renewal.

Tulane also hosted several prominent faculty, such as two members who each won the Nobel Prize in Physiology or Medicine: Louis J. Ignarro and Andrew V. Schally. Other notables such as Rudolph Matas, "father of vascular surgery" and George E. Burch, inventor of the phlebomanometer in medicine, also were on faculty at Tulane. Five U.S. Supreme Court Justices have taught at Tulane, including Chief Justice William Rehnquist. Tulane has also hosted several prominent artists, most notably Mark Rothko, who was a Visiting Artist from 1956–1957. Currently on the faculty are James Carville, Nick Spitzer, and Melissa Harris-Perry.