Bath County's Olympia Springs (also known as Olympian Springs), on the Licking River, is one of the most well-known Kentucky mineral spring resorts. Kentucky has more springs than any other state in the U.S., and because of large expanses of karst geology (limestone bedrock which dissolves easily, yielding caves and sinkholes), many of the springs are impregnated with minerals. These mineral springs were the basis of several industries in Kentucky's 18th and 19th century economy, including salt works, health spas and resort hotels, and the bottling and sale of "medicinal" waters from the springs. 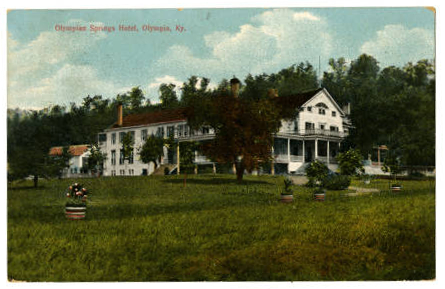 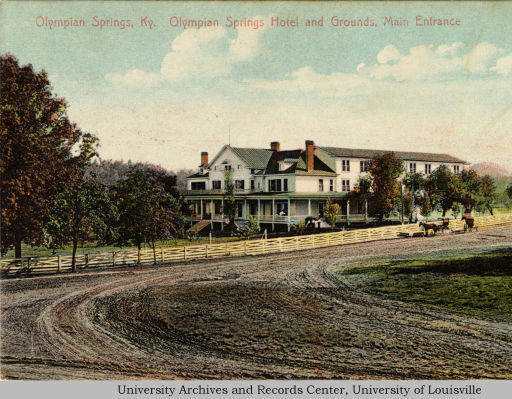 With over ten springs of saline-sulfur, chalybeate (water containing iron compounds), and white sulfur waters, a boarding house and cabins were built on the site (known as Mud Lick or Mud Lick Springs) as early as 1791 [4, 5, 7, 8, 1]. As of the early 1870s, the grounds included a Black sulfur spring, a saline-sulfur well (diuretic but not laxative), a white sulfur spring about half a mile from the well (which began flowing after the 1811 New Madrid Earthquake), and from a pair of chalybeate springs (about 40 yards apart, half a mile from the well) [2, 4].

The springs were accessible by the Lexington and Big Sandy Railroad, which stopped at Mount Sterling; from there, a stagecoach brought guests to the springs, 35 miles from the station [4, 5].

Colonel Thomas Hart changed the name to Olympian Springs (sometimes referred to as Olympia Springs) when he purchased the property in 1800 and established the first hotel (with a dining room large enough for 100 guests). Three years later, Kentucky's first stage route was established between Lexington and Olympian Springs; by 1804, according to a letter from Henry Clay to Colonel Hart, "The Olympian Springs are the constant topic of conversation. 'Do you not intend to go there this season?' is a question put to everyone, and nobody answers it in the negative," [3, 7, 9].

Olympian Springs was sold to Cuthbert Banks (who added buildings not specified in the literature) in 1807. During the War of 1812, the 28th Infantry under Colonel Thomas Dye Owings camped at the springs; the Colonel directed the building of "most of the cabins" at the springs, which he purchased from Banks [1, 6, 7]. Owings leased the property to a number of proprietors (J. P. Wagnon, Elisha Catlett, George Coleman, Edward and George Owings, Mathew Maury, Thomas I. Garrett, Daniel P. and Thomas Moseley, Sr., and George and John Landsdowne) until George Landsdowne purchased the resort in 1830 [6]. During the 1833 cholera epidemic, residents of Lexington fled to the nearby hotel at Olympia Springs [1, 6].

On October 19, 1864, during a Civil War battle at Olympia Springs, many of the cabins were burned, but the resort recovered [7]. After the Civil War, the lost cabins were replaced and the bathing rooms renovated; the resort's amenities and activities included cards, billiards, horse racing, music, dancing, bathing, swings, riding, and hunting (a hunting dog pack was kept on site for guests). The Chesapeake and Ohio Railroad stopped near Olympia, and the resort kept hacks and omnibuses waiting at the station to transport guests [6, 7]. The resort continued operation into the 1940s, but according to the literature as of 1984, "nothing remains of this 19th century vacation and health resort," [3].