The Dabbs House has served as both a historic home, a police station, a home for the poor, and a headquarters for Confederate General Robert E. Lee during two critical months of the Civil War. Today, the home is a house museum with exhibit galleries and a research library. The museum and home are open to the public, with daily tours of the home and the museums exhibits and gift shop. Visitors can start their tour with a video on the history of the Dabbs House. For those interested in a more in-depth study of the history of the area, the Research Library houses books and many other resources related to the the Civil War in Henrico County.

A marker outside of the Dabbs House that displays the 5 commanders who were at the "Dabbs House Meeting" on June 23, 1862 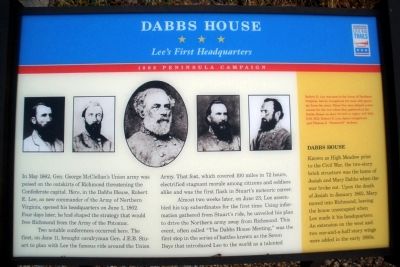 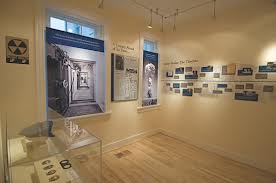 Room that served Robert E. Lee during his 1862 stay. 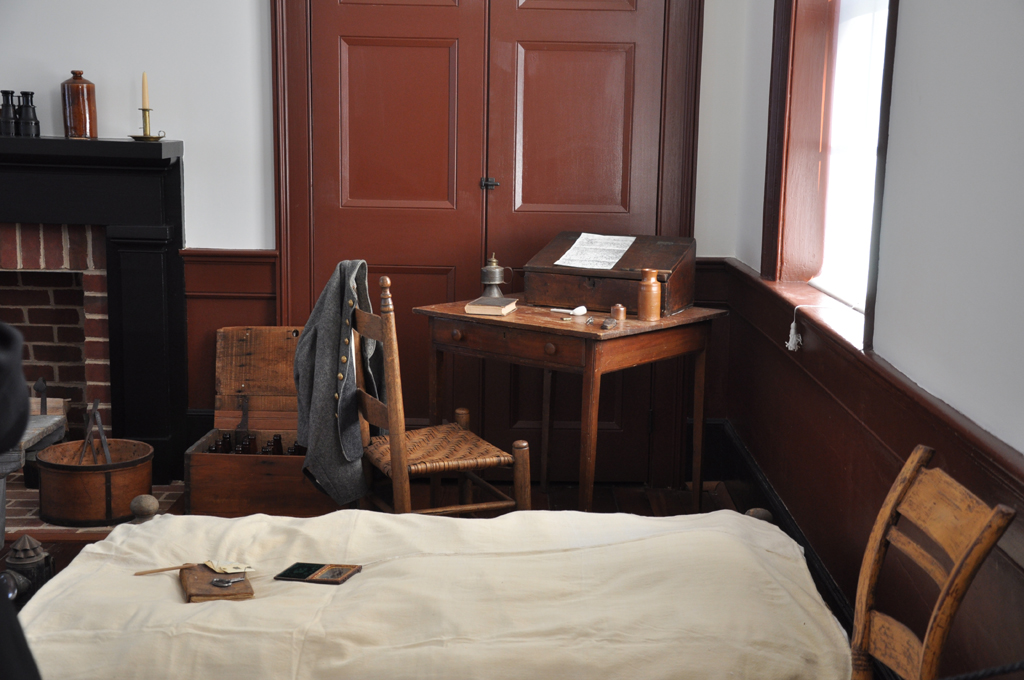 The Dabbs House Museum was known as the High Meadow before the Civil War. The house was first built in 1820 and Josiah and Mary Dabbs moved into the home in 1859. During the next century-and-a-half, the building was used for many different purposes. The house was used as a headquarters for Robert E. Lee during the Civil War, an Almshouse for the poor from 1883 until 1924 and a police station from 1940 to 2005.

In 1862, Robert E. Lee used the Dabbs House as a headquarters from June until August with the permission of Mary Dabbs, a widow at that time as her husband Josiah had passed away. The arrangement served Ms. Dabbs, as she had moved to the Confederate capital of Richmond in hopes of better safety during the war. Lee was a new commander of the Army of Northern Virginia at that time and opened his headquarters on June 1st.

The home held several important conferences of Confederate leaders. The first of these two meetings was on June 11th. This meeting brought cavalryman General J.E.B. Stuart to plan with Lee, the famous ride around the Union Army. This famous ride covered a hundred miles in three days. The second, of the two meetings was twelve days later on June the 23rd. It is known as the “Dabbs House Meeting”. A marker outside of the Dabbs House displays the five commanders who were present at this meeting, with the following caption, “Robert E. Lee was new to the Army of Northern Virginia, but he recognized his most able generals from the start. These five men shaped a new course for the war when they gathered at the Dabbs House on June 23 (Left to Right): A.P. Hill; D.H. Hill; Robert E. Lee; James Longstreet; and Thomas J. “Stonewall” Jackson.” This marker is also included in the Virginia Civil War Trails marker series. This was the first step in the series known as the Seven Days Battles, which allowed people to see Lee as talented general.

The Dabbs House was bought by Henrico County in 1883 and was turned into an Almshouse for the poor, the old and mentally ill up until 1924. Almshouse’s didn’t last long people were moved to state institutions. The Dabbs house was rented out for a number of years until the Henrico Police Division bought the building in 1940. The police force used the building up until 2005, where it was turned over to the Division of Recreation and Parks. The building became a museum in 2008. In 2010 the building was converted into both a museum and the Henrico County Tourist Information Center.

The museum has exhibit galleries from its use as a residence for the Dabbs family to its occupancy as Henrico’s Police headquarters. One of the displays in the museum are letters from Robert E. Lee. One specific letter on loan to the Museum was written by Robert E. Lee, during his stay at the Dabbs House. The letter is addressed to G.W. Randolph, Secretary of War on June 21st 1862. In the letter, Lee writes regarding one of his division commanders, Gen. John B. Magruder. He expresses surprise that Gen. Magruder has received orders to remain in Virginia, and dismay that he learned about these orders from Magruder himself instead of from the War Department. Asking Randolph to confirm the orders, Lee indicates that future orders for Magruder (and, it is assumed, for other commanding officers) should be communicated directly to him. This letter is even signed by Lee with his famous trade mark closing “Your Obedient Servant”.