The New Haven Green dates back to 1638 when English Puritans first arrived in the New World. Designed in the traditional town common style, the 16-acre park holds offers a gateway to understanding the history of New Haven. The park is home to several markers and events related to the community's role in the American Revolution to the Civil War and beyond. The Green is also home to the final resting place of many important historical figures. Originally, the Green solely held a meetinghouse, church, and a market, and later it was the site of the school, prison, the First Methodist Church, and a succession of statehouses. Today, a variety of municipal, commercial, and university structures border the New Haven Green. The Green is located just minutes away from Yale University. Throughout the year, the Green also hosts numerous public events, including the Festival of Arts and Ideas and the New Haven Jazz Festival. Due to the Green’s historical role in New Haven, comprised of its colonial and architectural significance, the New Haven Green Historical District is a U.S. National Historic Landmark District and it is listed on the National Register of Historic Places. 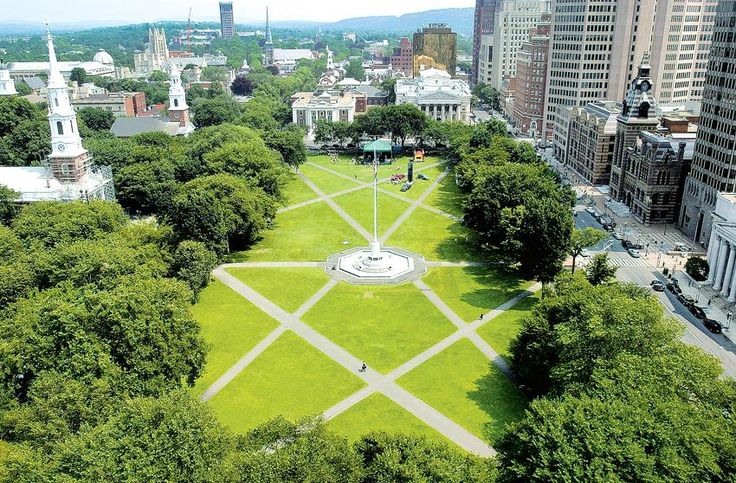 Part of a panoramic view of The Green in a "Souvenir Folder" sold and mailed in 1919.

Map depicting the original town plan of nine squares. John Brockett was given the credit for laying out the plan in 1641. 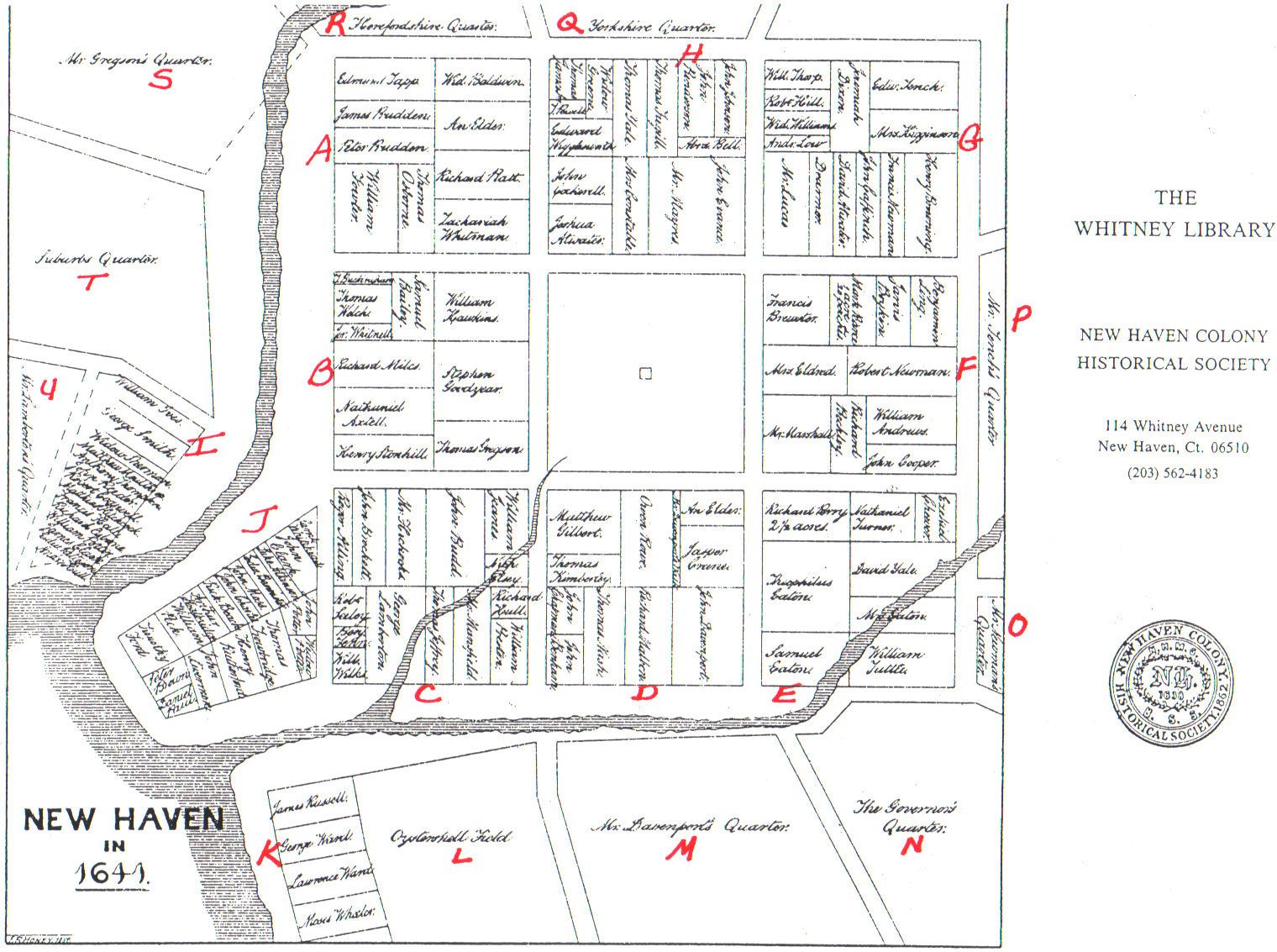 Center Church on the Green, built in 1812 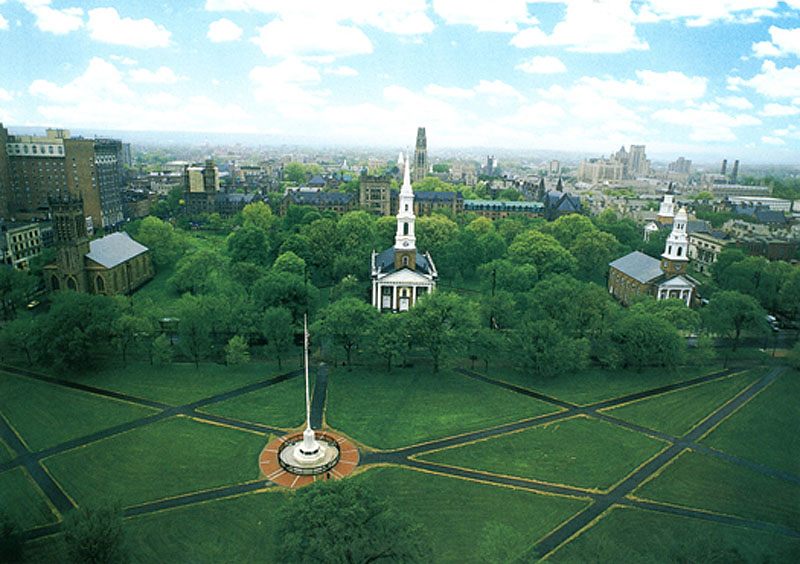 History of the New Haven Green

The New Haven Green dates back to the arrival of the English Puritans to the American colonies in 1638. Its design followed that of traditional town greens (commons) in England. According to its first map, attributed to Thomas Brockett in 1641, the Green was surrounded by eight squares. Each square was further divided into the plots allotted to the persons who had invested in the colony.1

The New Haven Green became the place of town government as well as religious worship. The first meetinghouse, church, and market were built on the Green as early as 1639, and the Green also served as New Haven’s burial ground up until the early 19th century. In fact, by 1821, the practice of burying bodies in the Green was abolished and the headstones were moved to the Grove Street Cemetery. A conservative estimation states that at least 4,000 to 5,000 people remain buried in the Green, including Benedict Arnold’s first wife, founder of Yale University Reverend James Pierpont, Theophilus Eaton (founder of New Haven), and members of President Rutherford B. Hayes’ family.

Aside from its general role at the town center in Colonial New Haven, the Green’s first endearing moment occurred in 1718, when the first commencement for Yale College transpired on the Green.

Years later, during the American Revolution, New Haven resident (and later infamous traitor) Benedict Arnold was among the first to agitate for fighting against the King’s troops. Town meetings transpired on the Green, and Arnold spoke passionately for the New Haven militia to march to the aid of the Massachusetts militia. Following similar purposes of Town Greens in England, the New Haven militia trained on the Green (Civil War regiments would later do the same). Among the militiamen training on the Green was Nathan Hale, a Yale student renowned for his bravery as a spy during the Revolution. Partly because of New Haven’s role in training the militia, and the militia’s participation in the Battle of Bunker Hill and the Battle of Lexington and Concord, British troops burned most of the city when they landed in 1779.

Prior to 1825, the New Haven Green also served the slave market. Similar to other town greens up and down the east coast, slaves were often bought and sold on the Green. The slave market’s horrid effects influenced staunch abolitionist and writer Pastor Bacon, whose writings against slavery are said to have been read by Abraham Lincoln. Later, the Amistad incident furthered abolitionist sentiments in New Haven and throughout the northern states (the Amistad captives were also held in the New Haven jail and tried in the courthouse, both of which rested on the upper Green).

During the Civil War, the Green was also a prominent training and marching center for some of the war’s most prominent regiments, including the Second Regiment of Connecticut Volunteers and the Twenty-Ninth Colored Regiment, C. V. Infantry.3

Nowadays, the New Haven Green is central to the historical and architectural grandeur of central New Haven. One of the most striking buildings on the Green is the Trinity Church on the Green, built between 1814 and 1815 and known as the first Gothic Style church identified in the United States. The United Church on the Green was built in 1814, and the Center Church of the Green (established in 1639) features a Georgian style building built in 1812.

Between 1986 and 1990, the New Haven Green underwent an extensive renovation, and today, it is the site of numerous public events throughout the year, including concerts, festivals such as the Festival of Arts and Ideas and New Haven Jazz Festival, and many others.