The Woods Hole Oceanographic Institution (WHOI) was founded in 1930. It is the country's largest higher education institution dedicated towards the study of marine life. The Ocean Science Exhibit Center at WHOI allows visitors to learn about the research conducted by the institution as well as the vessels and tools it uses to for underwater exploration and research. Exhibits include videos about the Institution, the discovery and exploration of the Titanic wreck, hydrothermal vents on the ocean floor, and whale, shark and dolphin research. During the summer, the museum offers walking tours of the campus grounds. It also offers lectures by Institution scientists in July and August. 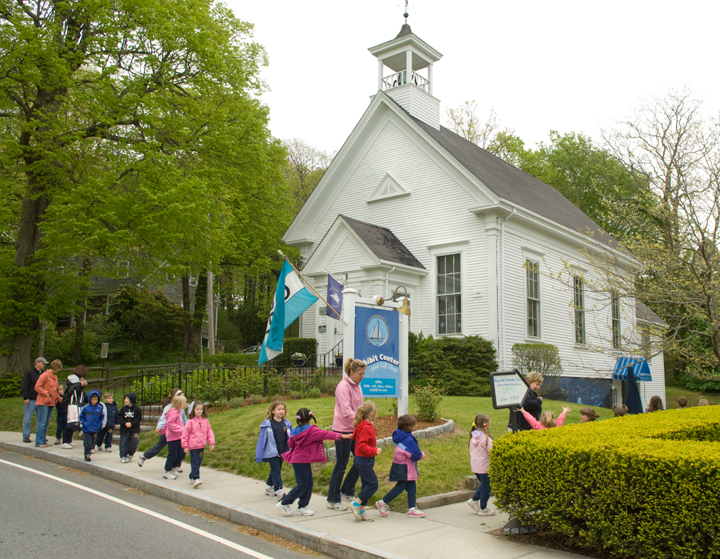 View inside the center 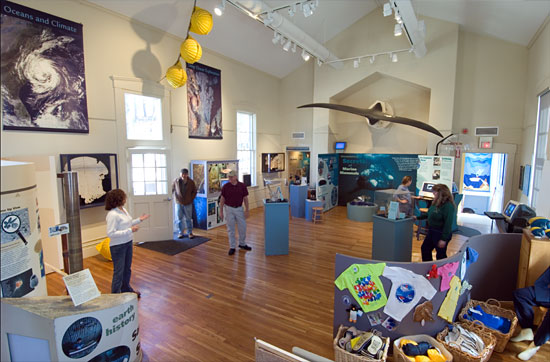 The Woods Hole Oceanographic Institution (WHOI) is on the cutting edge of oceanographic research.  It utilizes the most advanced developments in technology to get into the ocean and study marine life up close.  According to its website, WHOI’s mission is to advance “knowledge of the ocean and its connection with the Earth system through a sustained commitment to excellence in science, engineering, and education, and to the application of this knowledge to problems facing society.” The Ocean Science Exhibit Center is located nearby in a white building that looks like a former church.  It is only a short walk from the water.  Visitors will learn about the institution’s research history, as well as the tools and vessels that were used.  Many of the tools, including the popular “SharkCam” were created by the engineers working in Woods Hole.

There are short videos which tell the stories of the research and equipment, as well as artifacts to view and hands-on activities for younger children.  Kids can use a microscope to get a closer look at some of the shells and other underwater specimens or sit at the lego table and create their own research vehicle.  On the first floor, there is a replica of the underwater research vessel “Alvin” that children can sit inside.

Only a hundred years ago, there were very few groups dedicated to exploring and preserving the creatures living in the oceans.  The director of Woods Hole’s Marine Biological Laboratory, Frank R. Lillie, and the President of the Rockefeller Foundation’s General Education Board, Wickliffe Rose, spoke several times during the early 1920s of the need for a specialized center for oceanographic research on the East Coast (and while there was a program on the West Coast, it needed to more support).

Lillie became the first President of the Board of the Woods Hole Oceanographic Institution.  Henry Bryant Bigelow of Harvard University was appointed as WHOI’s first Director.  The Rockefeller Foundation provided funds for construction, equipment, and several years of expenses.  For this type of research, one of the most important things that they needed to get going was a large boat.  The Atlantis, a 142-foot, steel-hulled ketch with a massive sail was built in 1930 and arrived in Woods Hole a year later.

During World War II, the oceanographers at Wood Hole found themselves being frequently consulted on matters of national defense.  They were commissioned to figure out what composition of paint would prevent marine fouling, or the accumulation of different sea creatures such as mussels and barnacles on the surface of the boat.  Their work resulted in the Navy saving a lot of money on fuel when their ship bottom remained clear of attached organisms.  Other projects followed which help to solve a multitude of naval problems, including an inquiry of underwater explosives.

While there is no admission fee to visit the museum, there is a request for donations at the front desk. The Center’s hours vary throughout the year:

Mid-April through the end of May:  It is open Mondays through Fridays from 10AM to 4:30PM.

Starting Memorial Day weekend through the end of June, it is open Mondays through Saturdays from 10:00 AM to 4:30 PM.

In September and October, the museum closes on Sundays.  It is open on Mondays through Saturdays from 10:00 AM to 4:30 PM.

Finally, in November and December, the museum is only open on Tuesdays through Sundays, from `10:00 AM to 4:30 PM.

The hours vary throughout the year. See below for a complete listing.