At this location on the evening of February 4, 1972, thirty student members of the February Sisters occupied the former East Asian Studies building at the University of Kansas. The students believed that the administration was working to thwart the efforts of faculty members who wanted to offer more courses in Women's Studies. They also accused the administration of unfair hiring practices, gender discrimination in salaries, and unnecessary delays in the creation of a federally-required Affirmative Action program that might address these inequities. The students prepared a statement of demands prior to their demonstration and agreed to a quick and peaceful resolution after administrators agreed to meet with the women. In return, the students left the campus building the following morning. The meetings helped to spur action towards women's health initiatives on campus, an initiative that the University had already begun before the 1972 protest. It also accelerated movement towards the creation of a formal Women's Studies Program in 1973. The East Asian Studies Center had been the scene of a less peaceful protest the year before, when student protesters who had organized "the Kansas Revolutionary Army" firebombed the building as part of a protest against the Vietnam War. The Center moved to Strong Hall two years later and the area is now home to student housing. In 2012, the Women, Gender, and Sexuality Studies held a series of events commemorating the 40th anniversary of the protest. Embedded into this article are two videos of some of the participants describing the protest, as well as their experiences as women attending the University in the late 1960s and early 1970s.

A group of 30 students known as the February Sisters protested against gender discrimination and in favor of programs that would address the needs of female students. 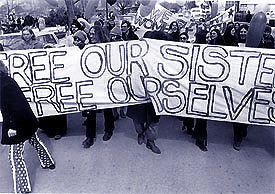 The campus newspaper's story included the demands of the protesters. 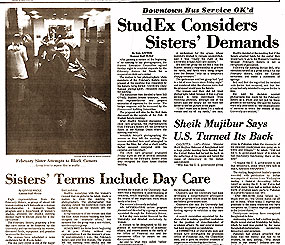 The campus paper also ran this photo of a protester taken against her will. After attacking the photographer, the student apologized, explaining that she feared parental retaliation if identified as a protester. 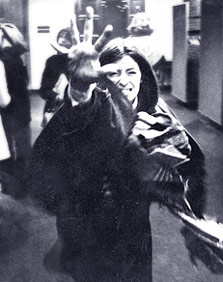 Faculty and students began formal efforts to create a feminist organization in the late 1960s. In 1970, Lawrence was home to a regional conference sponsored by the National Organization of Women and a chapter of the Women's Liberation Front was formed. Faculty members of the American Association of University Professors formed a special committee Commission on the Status of Women and the student activities organization hosted several forums and sessions about issues related to women's health and reproductive choice. Concern regarding these issues increased after the city's Planned Parenthood office closed in the fall of 1970 owing to a lack of resources.
Many participants of these and subsequent meetings, forums, and committees felt that campus administrators were moving too slowly in addressing concerns related to women's health, childcare, academic programs, and gender equality. On February 2nd, feminist author and leader Robin Moran came to campus and met with a group of about 30 students who decided to launch an organized protest. Taking the name "February Sisters," the group authored a platform of demands and prepared to occupy a campus building the following day.

The platform of demands included regular meetings between feminist students and faculty and administrators. The Sisters also called for the appointment of a woman to the position of Vice Chancellor for Academic Affairs and free daycare facilities for students with children, They also requested a women's health program that would offer free medical services and counseling for female students, greater efforts to recruit female students and professors, and the creation of a Women’s Studies Department that would be independent from male administrators.
The students, along with four of their children, chained the doors shut on the evening of February 4th and prepared to occupy the building for several days. The students brought sleeping bags and supplies, but university administrators responded quickly and agreed to meet with the students to hear their demands. University Senate Executive Committee assembled on the evening of the 4th and offered to meet with the leaders. The Senate Committee resolution included a statement that they neither condoned nor condemned the protest, and recognized that the University could improve its communication with students do more to foster gender equality on campus.

The students responded to the Senate Committee resolution by ending their occupation of the building the following morning. With the exception of a few male hecklers who had gathered the previous evening and a minor attack on a student photographer who took pictures of the protesters against their will, the protest involved minimal conflict.

Content and images in this article build upon the archives of the Spencer Research Library and the work of research of historian Douglas Harvey for the University of Kansas KU History webpage, http://kuhistory.com/articles/sisters-act/ accessed 2/9/16 February Sisters, a Historical Summary, Women, Gender, and Sexuality Studies webpage, https://wgss.ku.edu/february-sisters