Many Hall was originally built in 1885 and named after the university's 2nd president Reverend Basil Manly. It currently houses the Department of Religious Studies and the Department of Gender and Race Studies. Manly Hall was originally built to house dorm rooms, the university president's office, and lecture rooms for law, engineering, mathematics, and Greek.

Current photo of Manly Hall by The University of Alabama 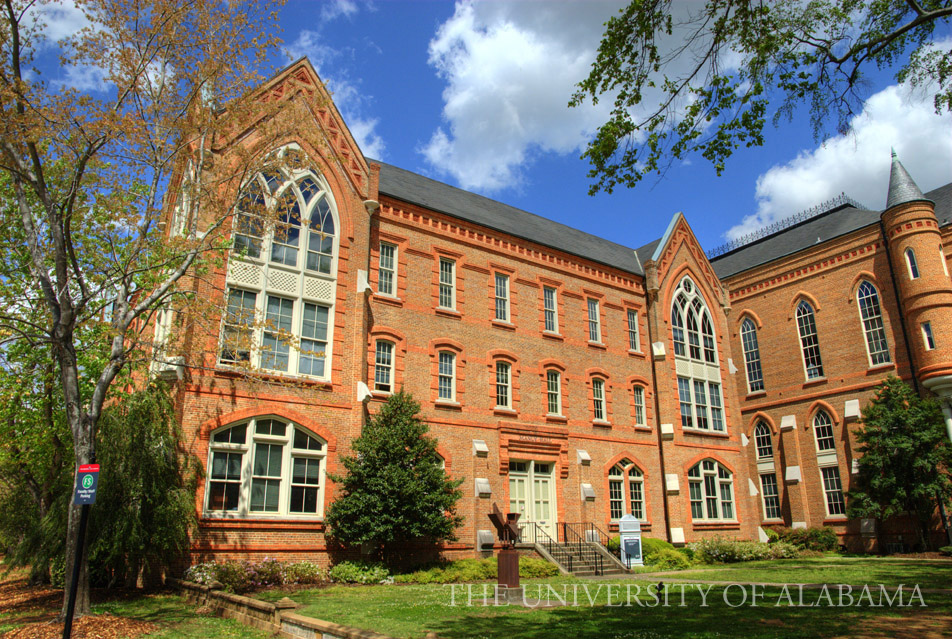 Manly Hall is a three and a half story Gothic Revival structure in red brick. It is modeled similar in design to Clark Hall. The building was finished in 1885 and named after Reverend Basil Manly, the second president of The University of Alabama from 1837-1855. Manly was a leading Baptist minister and educator. Throughout his tenure at the university, Manly was also an evangelist, preaching across the state and helping lead the first Baptist Church in Tuscaloosa, Alabama. He was an early proponent of secession and an advent supporter of slavery. He used the Bible and Christian teachings to justify the institution of slavery. Manly was also appointed the official Chaplin to the newly form Confederate government.  The hall was originally built to house dorm rooms, the university president’s office, and lecture rooms for law, engineering, mathematics, and Greek. It currently houses the Department of Religious Studies and the Department of Gender and Race Studies.

Basil Manly was born in North Carolina in 1798 to Captain John Basil Manly and Elizabeth Maultsby Manly. After a conversion experience in 1814, Manly believed he was called to be a preacher and stove to fulfill that calling (Fuller, 2000). In 1821, he graduated valedictorian of his college and then moved to the Edgefield District in South Carolina. He was ordained a minister in 1822 and led the Edgefield Revival, a religious awakening that converted many and won him fame. He was picked by Richard Furman to succeed as the First Baptist Church of Charleston, south Carolina, which Manly led from 1826-1837. In 1837, he moved his family to Tuscaloosa, Alabama in which he accepted the presidency of The University of Alabama. Basil manly held the presidency for 18 years, longest tenure in the university’s history still to date. In 1837, the university was in a time of disarray. During his tenure, Manly implemented policy and procedures, many of which have shaped the university. Manly is credited for improving and broadening the school’s curriculum, recruited notable professors, and made an effort to discouraged dueling on campus in which men settled disputes with the use of pistols. He improved the universities science program by hiring professors such as F.A.P. Barnard and Michael Tuomey (Fuller, 2000).

Manly was an unwavering defender of slavery. He hoped for the peaceful secession of southern states during the war but said that he was willing to perish in pursuit of southern rights (Flynt, 1998). In 1845, Manly argued in the Alabama Resolutions, a series of demands that he wrote and presented to the national convention that ministers could own slaves, leading to a split between northern and southern Baptists. Although he defended the institution, he preached that slaveowners should treat enslaved workers fairly and provide for both their spiritual well-being and their physical needs. He acknowledged the humanity of enslaved African Americans even though some southern slaveowners saw evangelical preaching about slavery as a threat to the institution because if slaves were viewed as humans with souls, then they deserved equal treatment under the law. Manly reconciled such tensions through his Calvinist theology, with its doctrines of duty and acceptance of one's place in God's divine plan. He used the Bible and these Christianity teachings to justify the institution of slavery.  Manly owned more than 40 slaves and oversaw a plantation along the Black Warrior River (Flynt, 1998). Although Manly acknowledged the humanity of slaves in his sermons and sought to guide them spiritually, he also believed in and practiced corporal punishment. His life and career exemplified the complexity of slavery in the Old South, as he tried to reconcile support for human bondage with Christian principles.