Museum of the Moving Image (MoMI)

The Museum of the Moving Image (MoMI) is the only museum dedicated to the art, history, technique, and technology of the moving image in the world. By embracing the moving in all its forms, and by providing this knowledge to the public, the museum is able to provide a deeper appreciation and understanding of the moving image. MoMI is a one-of-a-kind destination for audiences of all ages and interests, from connoisseurs of classic cinema to children and families to avid gamers. At the Museum, visitors will find exhibitions, screenings, educational camps, and other group programs. Permanent exhibitions include "Behind the Screen," which showcases the creative process involved in creating moving images, and a gallery devoted to the life and work of Jim Henson. MoMI's offerings are enhanced by its location in the historic Paramount Studios Complex.

Facade of the Museum of the Moving Image building. 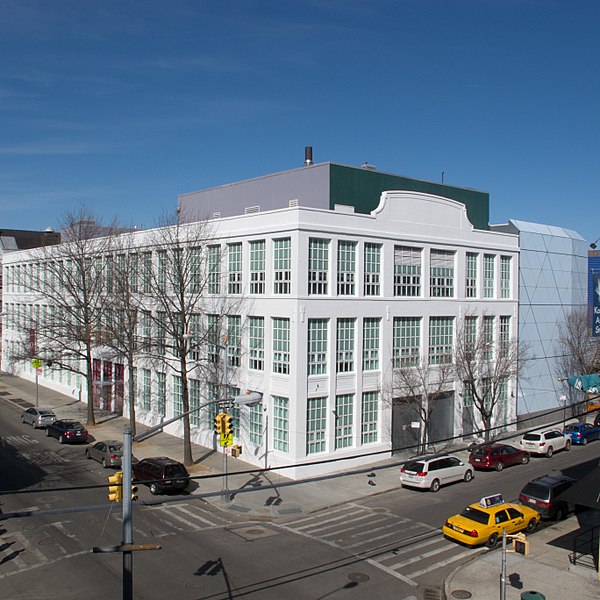 Front doors to the museum. 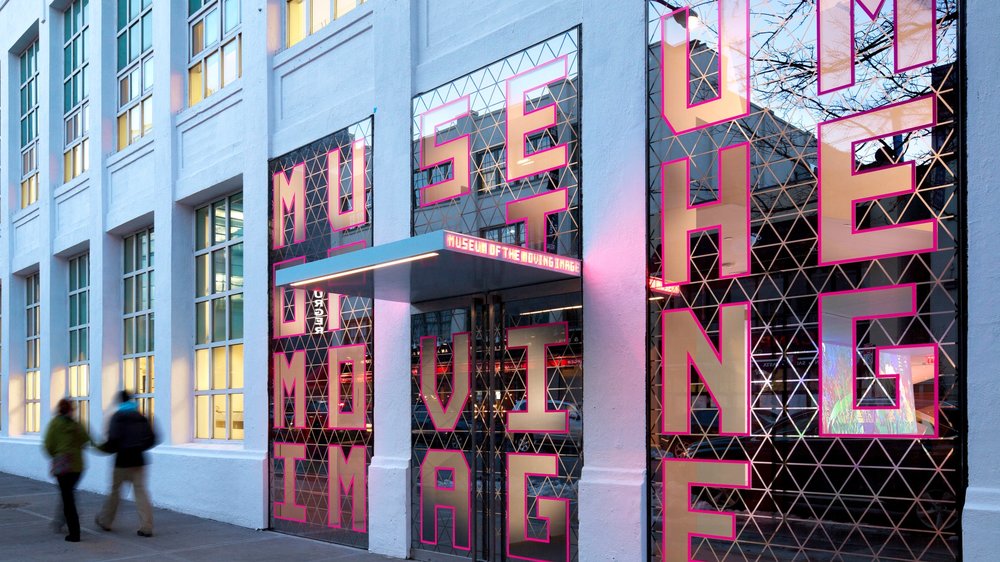 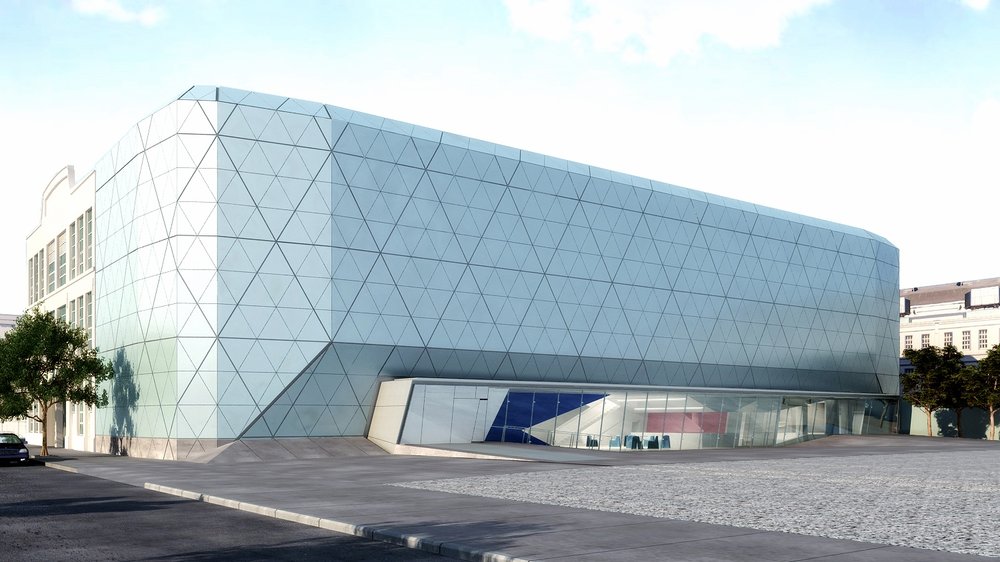 Foyer space for the museum, which exhibits the rounded surfaces and dichromatic design. 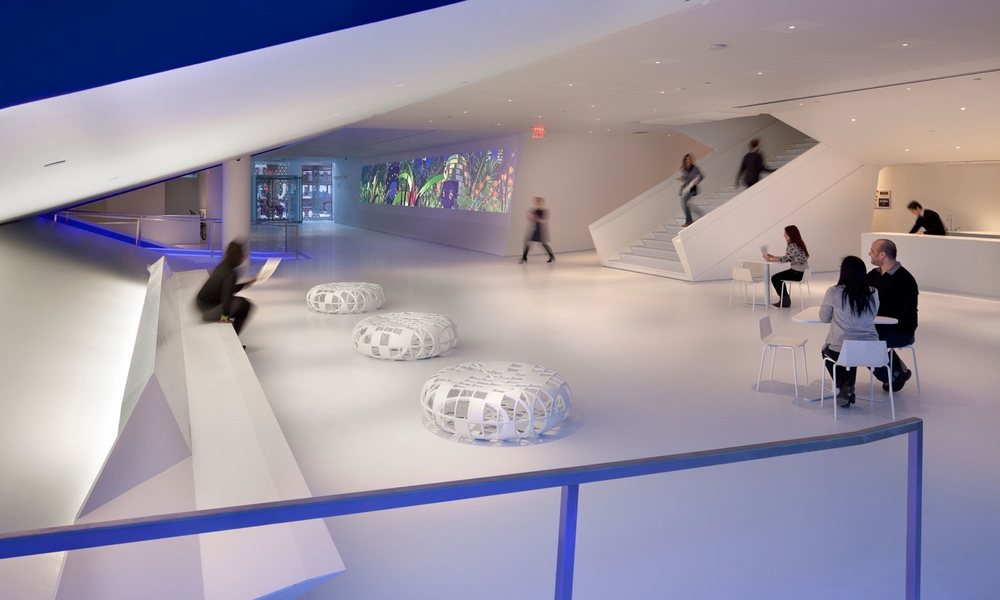 A theater in MoMI 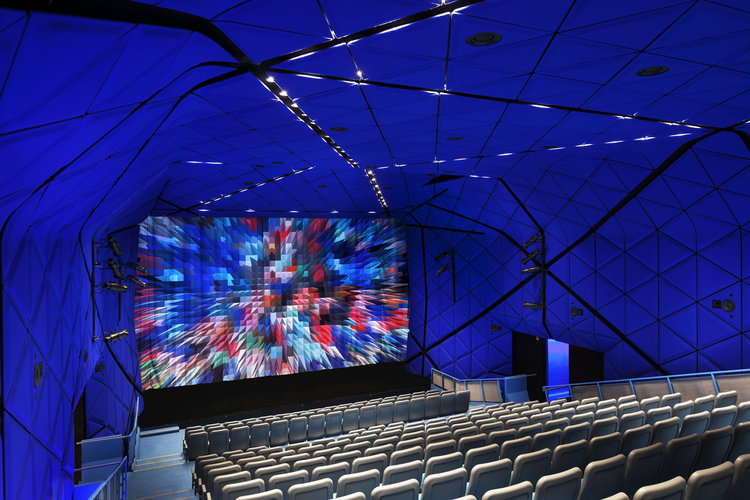 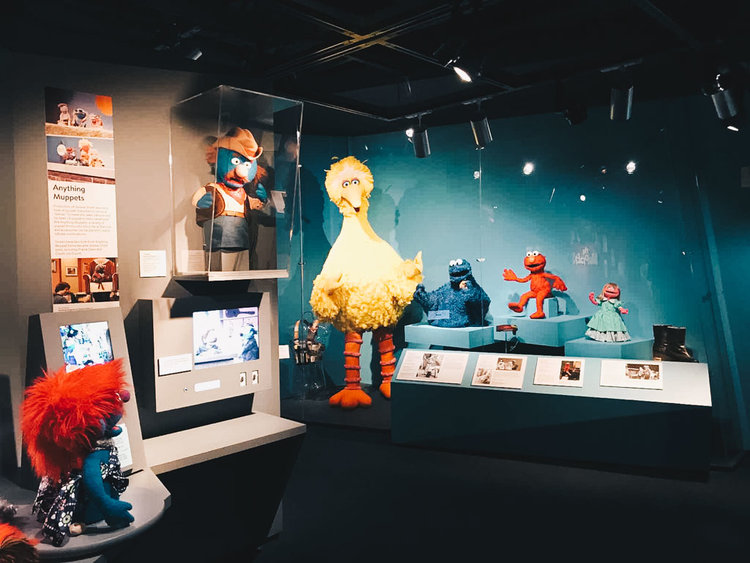 The Museum of the Moving Image (MoMI) occupies the historic Paramount Studios Complex. This site features nine historical buildings that were instrumental in the creation of media in the silent and early sound film era. MoMI occupies the earliest building constructed on the site, which was built in 1918. This structure is three-stories and composed of reinforced concrete. The building originally contained processing laboratories and offices for the movie industry. Another significant structure on the Paramount Studios Complex site was the East Coast’s largest sound stage for decades. Even into the 1970s, the stage remained one of the four largest in the world. Hundreds of commercial films were shot at the Paramount Studios Complex between 1920 and 1942. Many iconic celebrities such as Gloria Swanson, W. C. Fields, and Rudolph Valentino forged their careers in the Paramount buildings.

By the 1940s, the film industry was centered firmly in Hollywood. Due to this, Paramount Studios moved west, and their complex was transferred to the War Department in 1942. The army produced a variety of films at the New York studio, including training tapes, World War II propaganda shorts, and full-length films that glorified the military. In fact, the army became the most prolific producer of movies in the world, averaging an incredible three hundred films a year from 1942 until 1970. The military studio even received nominations for Academy Awards. In 1970, the Army stopped using the site and turned the buildings over to New York City. Independent companies were permitted to rent the complex for projects, such as the 1975 movie, “Thieves” starring Marlo Thomas, and the 1976 movie, “Next Man” starring Sean Connery.

Though the Paramount Studios Complex remained under New York City’s control, The Astoria Motion Picture and Television Center Foundation began managing the site in 1977. This foundation was a non-profit focused on revitalizing the historic site. They successfully nominated the site for listing on the National Register of Historic Places and began planning for a museum. George Kaufmann, a real estate developer involved with the Paramount Studios Complex, began serious talks with New York City to establish a museum. By 1982, he had secured one of the complex’s buildings. In 1985, The Astoria Motion Picture and Television Center Foundation was reformed as the American Museum of the Moving Image – the “American” part was later dropped as the collection expanded to include international works. The building chosen for the museum was renovated by Gwathmey Siegel & Associates Architects at a total cost of $15 million before the museum opened to the public in 1985.

After almost twenty-five years of operation, it was evident that MoMI was in need of a facelift. In February 2008, inauguration for a $67 million expansion and renovation project was held. Thomas Leeser of Leeser Architecture designed the new museum layout. The façade of the museum retained its symmetricity and utilitarian reinforced concrete. The only addition to the front face of the building was large glass letters set into the windows, which diffuse and refract light. Though the outside remained relatively untouched, the inside was completely redone in smooth dichromatic surfaces of white and rich blue. Sharp angles were avoided where possible. An entirely new structure composed of interlocking triangles was appended to the rear of the museum building. The modifications doubled the museum’s floorspace to 97,700 square feet, added several new theaters and amphitheaters, created a landscaped courtyard garden, and modernized the lobby and café. The overall goal of the project – which was completed in January 2011 – was to create a user-friendly space that allows visitors to immerse themselves in the museum’s works.

The permanent collections at MoMI are one of the most extensive and ambitious collections of moving image items in the world. The central exhibition, “Behind the Screen,” explores the creative process of moving images through historical artifacts, commissioned artworks, and video clips. Another permanent exhibition, which has been on display since 2017, documents the life and work of Jim Henson. In addition to the permanent galleries, MoMI also hosts a cycle of travelling exhibitions and thematic shows. The museum also screens more than 400 films a year and hosts panel discussions of current and historical media. MoMI also engages in a variety of educational programs. Over 50,000 students – most of whom are from the local area – experience the museum’s tours and camps each year. Furthermore, MoMI offers workshops for educators and maintains a website archive of all presidential campaign ads, which is available for free to the public. From its historic location, MoMI continues to educate and present about the moving image.