On October 14, 1947, Charles E. (Chuck) Yeager became known as the first man to break the sound barrier in a rocket powered X-1 fighter plane. A statue of General Chuck Yeager is seated in the schoolyard of Hamlin PK-8 in Hamlin, West Virginia. Yeager was a graduate of Hamlin High school in the class of 1941. Today, the Hamlin High School building is occupied by grades PK-8 due to the consolidation of high schools in the county; Lincoln County High School was opened in the fall of 2006. The statue was dedicated to the youth of Lincoln County on October 14, 1987 on the 40th anniversary of Yeager’s legendary flight.

The Chuck Yeager statue in front of Hamlin PK-8. 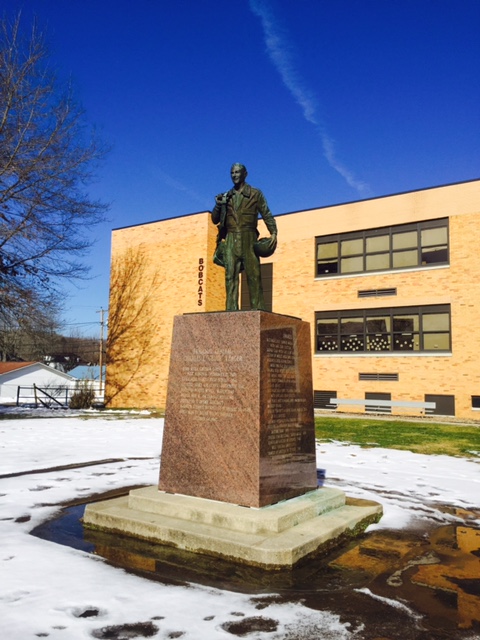 The right side of the statue which highlights Yeager's awards. 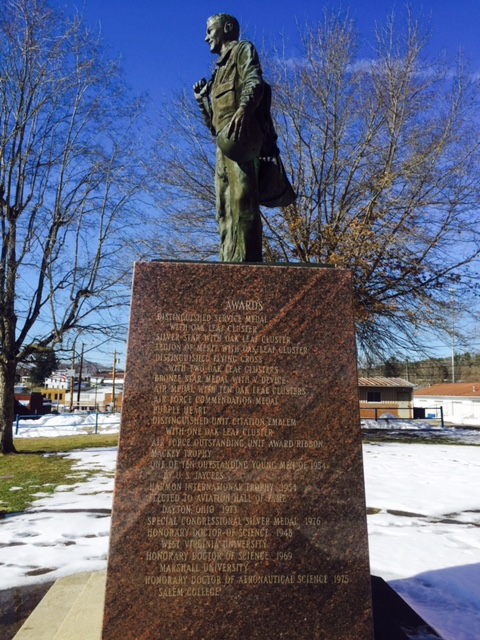 The left side of the statue which highlights Yeager's services. 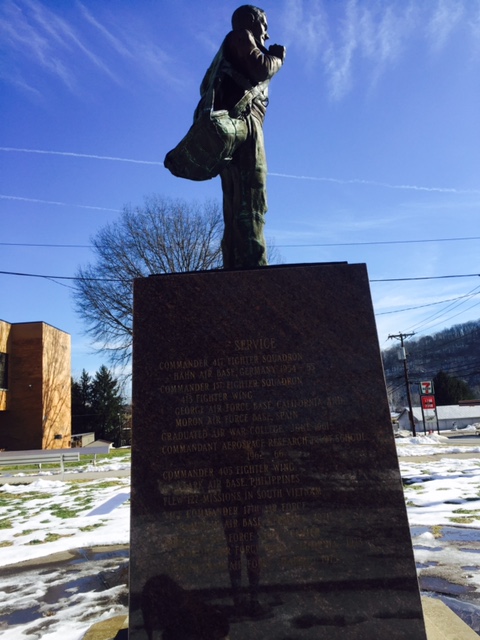 It is difficult to decipher in this picture, but this is the back of the statue and contains the quote- "Always Leave Yourself a Way Out" (spoken by Chuck Yeager). Also, the bottom of this side portrays the dedication of the statue to the youth of Li 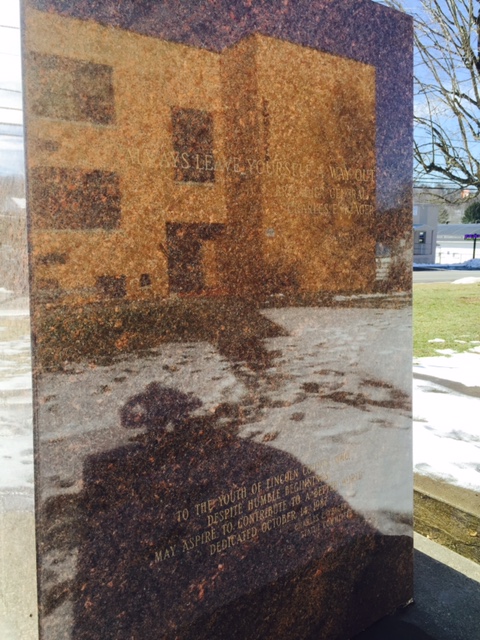 The front of the statue which highlights important dates/events in Yeager's life. 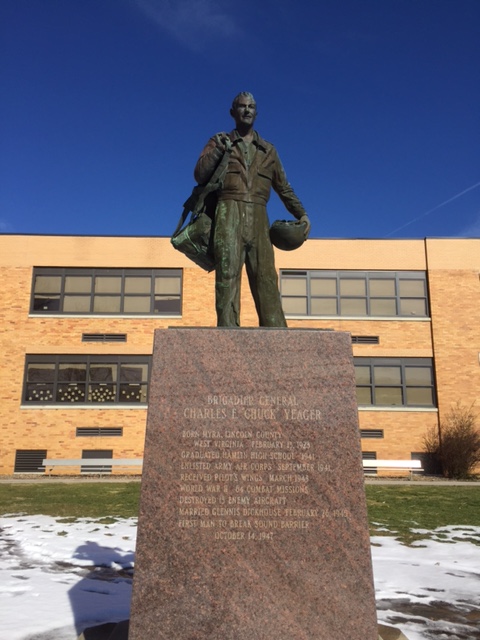 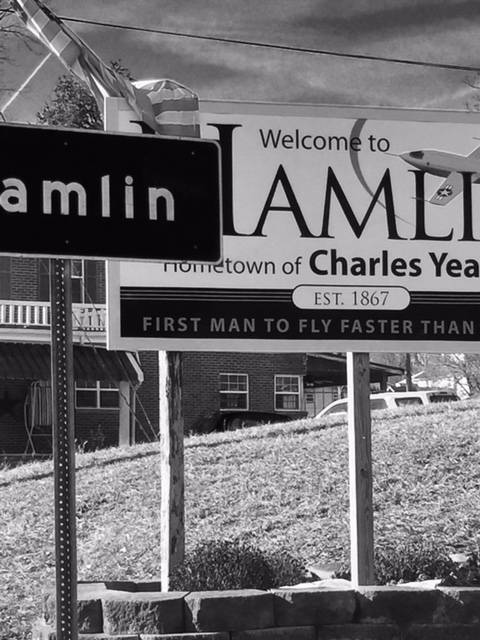 Chuck Yeager was born in Myra, West Virginia but received his education in the nearby town of Hamlin. After graduation, Yeager enlisted in the Army Air Corps, initially beginning his career as a flight mechanic. After about two years, Yeager became a flight officer and was sent to England in November of 1943. In March 1944, he was shot down in German-occupied France, was wounded and then rescued by French Resistance. Following this event, Yeager was temporarily imprisoned after being smuggled into Spain; however, he was released and eventually returned to England. On two occasions, Yeager shot down several enemy fighter planes in one day: October 12, 1944 five German planes; November 27, 1944 four German planes. Yeager’s historic flight that landed him fame was named “Glamorous Glennis”— an X-1 fighter plane which he named after his wife—and was flown on October 14, 1947, breaking the sound barrier, over the Mojave Desert.

Today, the statue honoring General Chuck Yeager’s accomplishments occupies a spot in the front schoolyard of Hamlin PK-8 in Hamlin, West Virginia (more or less his hometown where he went to school when the building was occupied by Hamlin High School). On the front of the statue is a list of important dates/events in Chuck Yeager’s life and career as a pilot: his birthday (February 13, 1923) and birthplace (Myra, West Virginia), high school graduation (1941), Army Air Corps enlistment date (September 1941), when he received his pilot wings (March 1943), services in war (World War II- flying 64 combat missions), the number of enemy aircraft destroyed during his career (13), the date he married his first wife (Glennis Dickhouse), and the date he broke the sound barrier (October 14, 1947). When facing the front, the right side of the statue is dedicated to a list Chuck Yeager’s awards. The left side lists all of his services performed during his career in the Air Force. Finally, the back portrays a quote by Chuck Yeager: “Always Leave Yourself a Way Out.” Also, on the bottom of this side has information pertaining to whom the statue is dedicated, which it reads: “To the youth of Lincoln County who, despite humble beginnings, may aspire to contribute to a better world.” Below this is the date the statue was dedicated: October 14, 1987, which is the 40th anniversary of Yeager’s historic flight.

After breaking the sound barrier and proving that a man could survive and conquer such a risky feat, Yeager continued to break the sound barrier throughout his career more times than he can count. Being the rebel that he is, on October 10, 1948, Yeager flew an F-80 airplane over the Kanawha River in West Virginia which violated certain Air Force regulations; however, he impressed by flying under the South Side Bridge, spinning, and then headed to California. In subsequent years, Yeager went on to supervise military and pilot training for the space program (pre-NASA). He trained most of the astronauts who served in the expeditions of Gemini, Mercury, and Apollo programs. A bestselling book titled The Right Stuff written by Tom Wolfe highlights important happenings in Chuck Yeager’s career and mentions other impressive pilots of that time; there was a film created with the same title. Yeager’s last flight, breaking the sound barrier once again, was made on the 50th anniversary of his initial historic flight, but this time he was flying an F-15 fighter plane.