The Chimney Point State Historic Site is located on the eastern shore of Lake Champlain at the foot of the 2011 Lake Champlain Bridge, one of the most dramatic gateways to Vermont. The site explores the history of the area's three earliest cultures, the Native American, French Colonial, and early American history, and the site itself through the artifacts left behind. The museum is in the historic c.1785 tavern building, which has a sweeping porch with beautiful views of the lake, the bridge, and the Crown Point, NY, State Historic Site. After the first European came in 1609, this place was important for interactions between the Native peoples and Europeans. In 1690 the English used it to watch for their French enemies on Lake Champlain. In 1731 the French took a stand here by building a fort to keep the English out of the lake and blocking their easy access to Canada. This was a frontier of New France, with the first long term French settlement in the region. This site saw much military activity during the French and Indian War and American Revolution. And after the Revolution, the tavern was built, welcoming visitors ever since.

Chimney Point State Historic Site offers a the museum in a historic tavern with exhibits that interpret the region's history in the colonial era, as well as the past 9000 years that the area has been inhabited by humans. 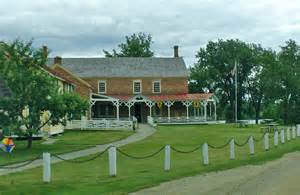 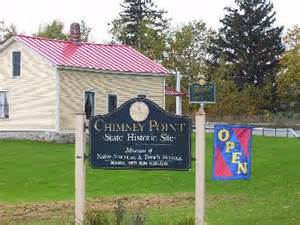 Chimney Point tap room. Stories have been passed down that claim Ethan Allen planned the capture of Fort Ticonderoga here, although there are not written records to verify this. 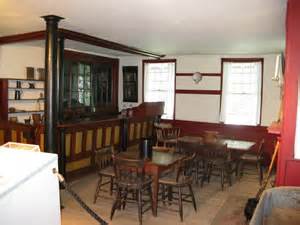 Chimney Point is located in the town of Addison, Vermont. It is a peninsula which extends into Lake Champlain forming a narrows. The local Native Americans had occupied the peninsula for thousands of years. The French, in 1731, settled it and built fortifications and houses on both sides of the lake.

This particular peninsula is thought to be the site of the first permanent Euro-American agricultural settlements in Vermont. As mentioned above, in 1731 the French settled here and built a fort a Chimney Point. This was to prevent the British advancing up the Champlain Valley.  In 1743, the King of France granted Sieur Gilles Hocquart a seigneuries. These seigneuries were also known as land grants and were issued to encourage settlement and cultivation with hopes of maintaining a strong presence against British encroachment. The seigneurie issued to Sieur Hocquart encompassed Ft. St. Frederic, which was built in 1734 and is now known as Crown Point, and was located on the western shore of Lake Champlain. The land on the eastern shore included what is now Chimney Point and the park. In 1759, the French evacuated Hocquart Seigneury and according to historic reports, The British blew up Ft. St. Frederic and burned the French dwelling leaving nothing but chimneys standing, hence the name Chimney Point.

As the British and France struggled for control of North American this area was the site of conflicts. Chimney Point, during the American Revolutionary War, was occupied at different times by both the British and American armies. In 1783, as the war was ending American settlers were returning to the Champlain Valley. During 1785, Champlain Valley saw regular ferry service across the lake established to and from Chimney Point.

Vermont saw increased traffic and improved communications with New York in 1929 when the first Lake Champlain Bridge opened. As with almost everything deterioration in the piers in 2009 and the bridge was demolished and replaced by a new bridge which opened in 2011. Preserving a 1785 tavern and having three cultures, Native American, French Colonial and early-American gives Chimney Point the distinction of being a Vermont State Historic Site.

Archaeological records show that there had been human habitation in the Chimney Point area for as long as 7,500 years. These were Native Americans who had camped, hunted and fished at Chimney Point. It is evident by looking and studying their tools that they adapted to a warming climate and had moved with the seasons to hunt, fish and gather food. Spear throwers and stone spear points were found indicating that had hunted for animals with them. The stone tools found were used for cutting, scraping and working wood and other stone. In a period known as the Woodland period, the natives made ceramic pots they used for storage of their food, water and to use with foods and produce.