House in the Horseshoe

This historic home was owned by colonial Patriot leader Philip Alston and known as the "House in the Horseshoe" during the American Revolution. In 1781, Alston's band of rebels were attacked at this location by British Loyalists led by David Fanning. The home was later owned by four-term governor Benjamin Williams, who named the property "Retreat." The home was built around 1772 and features antiques from the colonial and Revolutionary War eras. The home is also known as the Alston House. The home is open for tours that allow visitors to view contemporary artifacts, interpretive exhibits, and the original walls of the home that still bear numerous scars and bullet holes from the skirmish that occurred here during the Revolutionary War.

House in the Horseshoe. In spring and summer, bright flowers surround this plantation house named for its location on a horseshoe bend in the Deep River. Reenactors dramatize the historic skirmish that occurred at the home in the Revolutionary War. 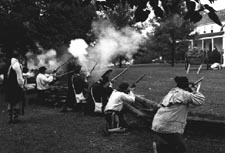 The interior of the home includes a number of late colonial and early Federal-period pieces. 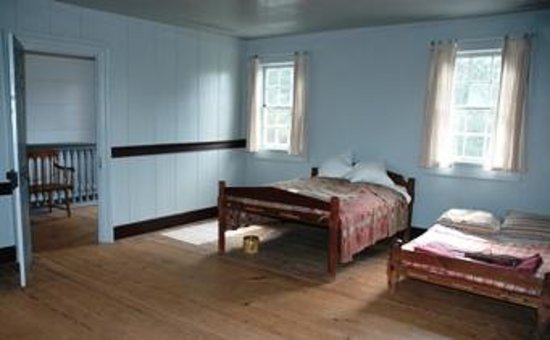 During the American Revolution, groups of citizen-soldiers called Whigs or Patriots battled not only the English, but also Tories-fellow colonists who were loyal to the King of England. While most of the battles of the Revolution utilized traditional tactics, the Tories and Patriots often used tactics of guerrilla warfare throughout North Carolina's backcountry.

This home, known at the time as the "House in the Horseshoe," was the home of Revolutionary War colonel Philip Alston. Alston and his band of revolutionaries were camped at the home on the morning of July 29, 1781, when they were attacked by a larger unit of Tories under the leadership of David Fanning. During the ensuing skirmish, Fanning's forces attempted to light the house on fire by rolling a cart filled with burning straw next to the home. After several casualties on both sides, Alston surrendered. The house was left riddled with bullet holes, many of which can still be seen today.

During the war, Alston served as a lieutenant colonel in the state militia. However, Alston's career after the war was less distinguished. Twice indicted for murder, he was removed as justice of the peace, and suspended from the state legislature for various reasons. In 1790, Philip Alston sold the house and plantation and left the state.

In 1798, Benjamin Williams bought the 2,500-acre plantation. Williams enlarged the house by adding two wings that include the kitchen and a master bedroom. One of Williams's ambitions was to become a planter, and the land of this property was well-suited for that purpose. The growing of short staple cotton became even more profitable after Eli Whitney's invention of the cotton gin in the 1790s. In 1801, Williams planted 42 acres of cotton. He expanded the operation to nearly two hundred acres the following year. By 1803, there were about 50 slaves working the plantation, which was valued at $30,000 dollars.

Besides serving four one-year terms as the state's governor and a colonel under George Washington, Williams was a member of the first board of trustees of the University of North Carolina. He also served in Congress during the years when it met in Philadelphia.

Williams died on the plantation in 1814. Though he was first buried some distance away, his grave was subsequently moved to the grounds of his former home. His family lived in the house until 1853. The dwelling changed ownership several times until 1954, when it was bought and restored by the Moore County Historical Association. In 1955 the state acquired the property.

The architectural style of the house is that of the coastal lowlands. A two-story frame dwelling, it is a typical 18th-century plantation house featuring a gable roof with large double-shouldered Flemish bond chimneys and a shed porch. House in the Horseshoe sitting room, featuring four poster bed, wicker cradle, and wooden crib. The center-hall plan reflects Gov. Williams's early 19th-century remodeling of the house. It is distinguished by the strikingly elaborate and well-executed detail of the doorways and some of the interior woodwork, including the especially fine mantel in the north parlor.