Located at the confluence of French Creek and the Allegheny River, Fort Machault was one of four forts built by the French to control the Venango Path between Lake Erie and the Ohio River. Fort Machault was the last stop on the supply route from Canada to Fort Duquesne. The former frontier outpost is located in what is now Franklin, Pennsylvania. Prior to the arrival of the French in 1753, Pennsylvania Blacksmith and Native American trader John Fraser had established a trading operation on this site, supplying Native tribes throughout the region with European trade goods, as well as repairing guns and other metal objects. Fraser's business was an example of the western expansion of Pennsylvania's fur trade that prompted the French to fortify the Ohio Country, for fear of losing trade and influence among the powerful tribes of the region. 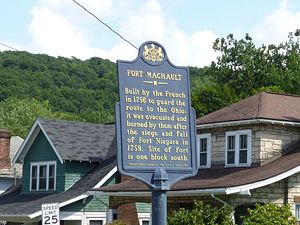 An artist's rendition of the French Fort Machault and the barracks erected nearby. Image from the Pennsylvania State Archives 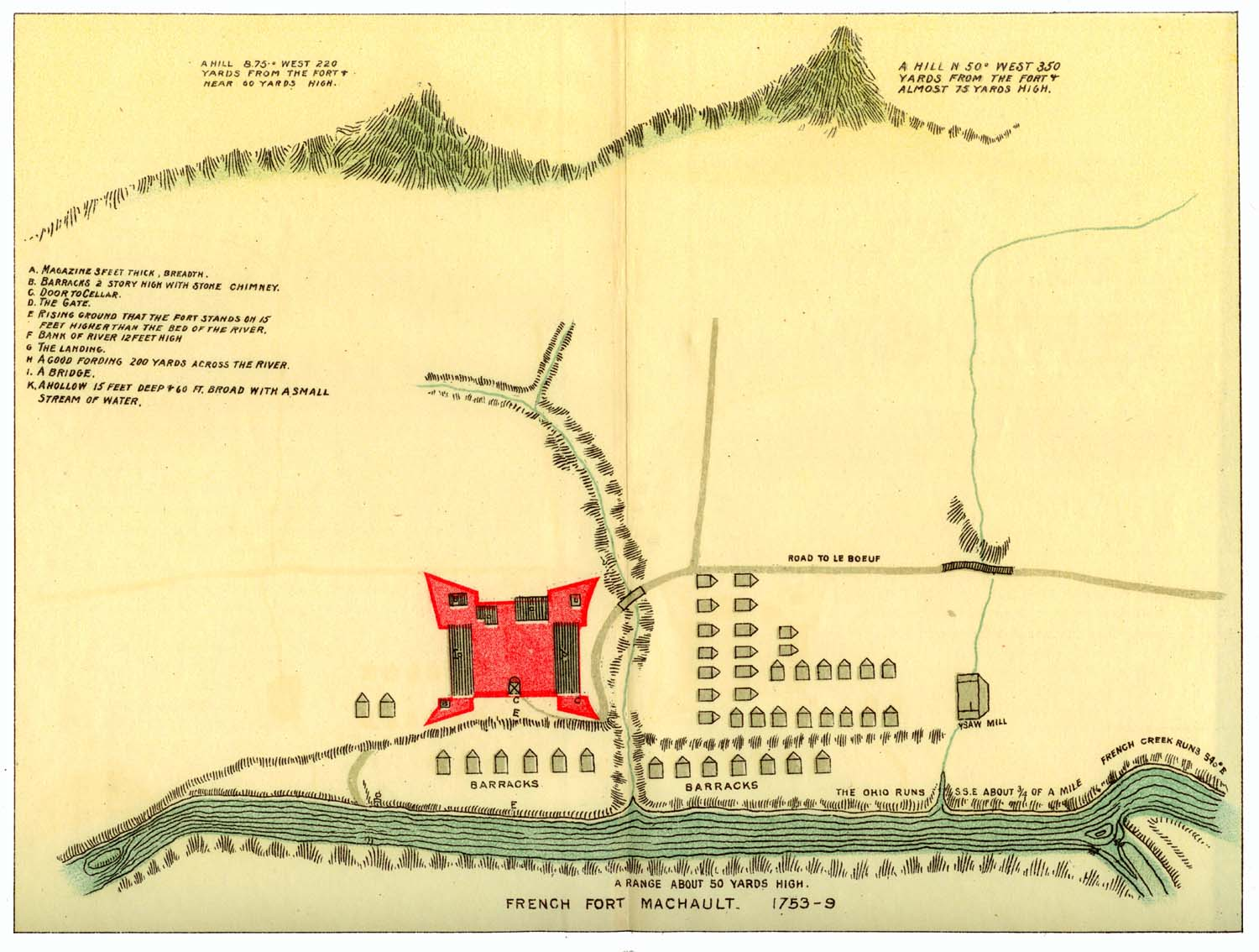 Between 1753 and 1759, France tried to restrict English colonial expansion and maintain their influence over area tribes by building four forts (Presque Isle, Le Boeuf, Machault, and Duquesne) from Lake Erie to the Ohio/ Mississippi Rivers. Due to disrupted maritime supply lines, the advance of the English Army under General Forbes to the Three River's area, and the defeat of the French at Fort Niagara (1759), these four forts were each abandoned. In the following 250 years, the locations of the former forts have been discovered by archaeologists and recognized by monuments created by historians.

This fort was built by the French to control the Venango Path, between Lake Erie and the Ohio River. It was named for Jean-Baptiste Machault d'Arnouville, the French Minister of the Marine at the time of its construction. It was also known as "Venango," the name of the nearby Delaware Indian village. Initially, the fort got off to a rocky start in the summer of 1753 when the Native Americans made clear their displeasure at the French incursion. Discouraged, Monsieur Bite and his fifty men retreated, carefully resuming construction in the spring of 1754. The Natives did not respond to their continued construction. Captain Chabert de Joncaire took over the project and a sawmill was set up to facilitate the construction, which was soon finished. Around the fort was planted corn, a peace offering to the Native Americans who were free to harvest the stalks. Eventually, a trade relationship developed as furriers, Natives, and soldiers bartered.

Fort Machault was built on a hill, 60 yards west of the Allegheny River. The fort was in the form of a parallelogram, about 75 by 105 feet. The curtain was made of hewed timber, stacked lengthwise. The four corners had bastions in the form of polygons. The bastions were built of saplings, eight inches thick, and 13 feet in height. The gate fronted the river. Inside the fort were a magazine, several officer's barracks, with two stories and stone chimneys. The soldiers’ barracks consisted of 45 buildings outside the fort. Reports of how many men were actually in the fort vary wildly. One account claims there were only six men manning Fort Machault, with their commanding officer only having sight from one eye. Another claims that around five hundred men were hosted in the barracks, along with several officers. Most accounts mention that the soldiers were “scarce of provisions”.

Prior to the arrival of the French in 1753, Pennsylvania Blacksmith and Indian trader John Fraser had set up shop on this site, supplying Indians in the region with trade goods and repairing their guns and other metal wares. His business was an example of the western expansion of Pennsylvania's fur trade that prompted the French to fortify the Ohio Country, for fear of losing trade and influence among the Indians there.

Fort Machault was the last stop on the supply route from Canada to Fort Duquesne. After abandoning Fort Duquesne in November 1758, the French fell back to Fort Machault, and the British expected them to launch a counterattack from there in the following campaign season. The fall of Fort Niagara in summer 1759, however, made the French presence in the Ohio Country untenable. They burned the post, giving all useful supplies to their Native American neighbors, leaving nothing for the oncoming British to use. The French retreated to Canada in anticipation of a British expedition north from the Forks of the Ohio. In 1760, the British built Fort Venango near this site.

Busch, Clarence M. “REPORT OF THE COMMISSION TO LOCATE THE SITE OF THE FRONTIER FORTS OF PENNSYLVANIA.” ff39.Html, USGenWeb Archives, www.usgwarchives.net/pa/1pa/1picts/frontierforts/ff39.html.

Four forts built by three nationalities (French, British, and American) were built within the modern-day borders of this small town due to it's location along the banks of the Allegheny River, a major trade route of the 1700-1800s.