Blackbeard, who is also known as Edward Teach, was born about the year 1680 in Bristol, England. However, much like other pirates little is known of his early life. Sometime in the early eighteenth century, Blackbeard left Bristol for Jamaica to sail on the ships. When England revoked his license, he joined with Captain Benjamin Hornigold. Hornigold taught Blackbeard everything he knew about taking ships, and they created an alliance; which, lasted for a little over two years. In November of 1717, Blackbeard captured La Concorde, a large French slaving vessel. He renamed the Queen Anne’s Revenge. He kept it for himself, and modified it for piracy by putting 40 cannons on it. Having these cannons made it one of the most fierce pirate ships ever. By March of 1718, Blackbeard decided to leave the Caribbean and sail up the east coast of America. On his journey, he encountered several ships that joined forces with him. By the time they reached Charleston, Blackbeard had nearly seven hundred men under his command. Blackbeard settled in North Carolina along the Outer Banks. Here, he could easily prey on ships traveling the American coast. Then in the fall of 1718 Blackbeard returned to his favorite hideaway off Ocracoke Island, today known as Springer’s Point. This is where Blackbeard is said to have hosted the largest pirate gathering ever; many other famous pirates sailed in for this event. On the morning of November 22, 1718, Lt. Maynard and Blackbeard fought a bloody battle near Teach’s Hole at Ocracoke Inlet. Blackbeard received twenty sword wounds and five gun shots before coming down. As a warning to other pirates, Blackbeard's head was cut off and suspended from the bow of Maynard's ship. Blackbeard’s treasure is still talked about today, however Maynard searched for Blackbeard's treasure for years, but found only supplies and letters. To this day nothing of his “treasure” has been found. 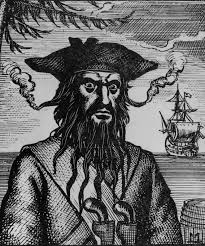