The gate heading up to the headmasters house. This is all that is left after the fire in 2004. 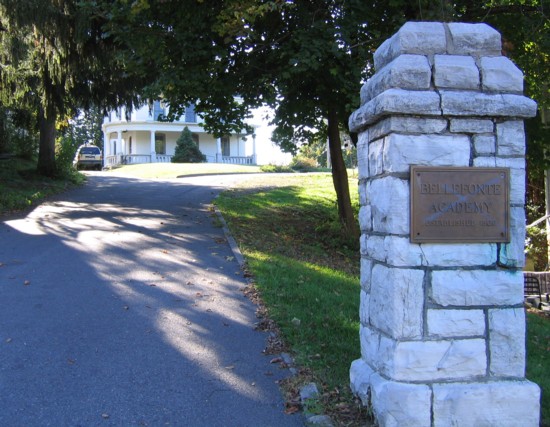 Bellefonte city founders James Dunlop and James Harris worked to create an elite academy of learning in their city in the early 1800s. In 1805, the Pennsylvania Legislature approved the charter for what would become the Bellefonte Academy.

Reverend James R Hugh served as headmaster of the Academy from 1868 to 1900. He was succeeded by his son James Hugh, who operated the school until it had to temporarily close during the leanest years of the Great Depression.

The Academy educated numerous governors and politicians, including Andrew Curtin and Rev John Palmer. The Academy caught on fire in 1904, but the school trustees were able to not only repair the damage, but add a third floor to the building along with an improvement to the front of the building. After the Great Depression, the building was converted into an apartment building. After the building was destroyed by fire in 2004, the only physical structure remaining from the historic school is the former headmasters house.