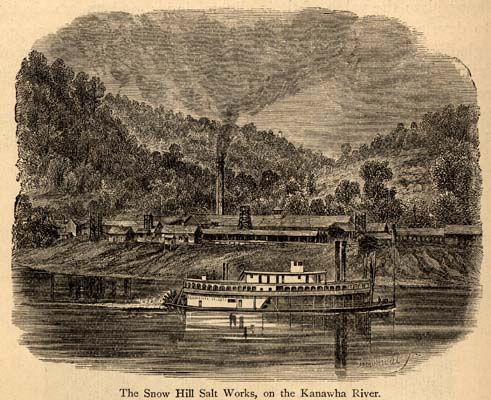 Group of salt wells with a railroad in the background, ca. 1890s 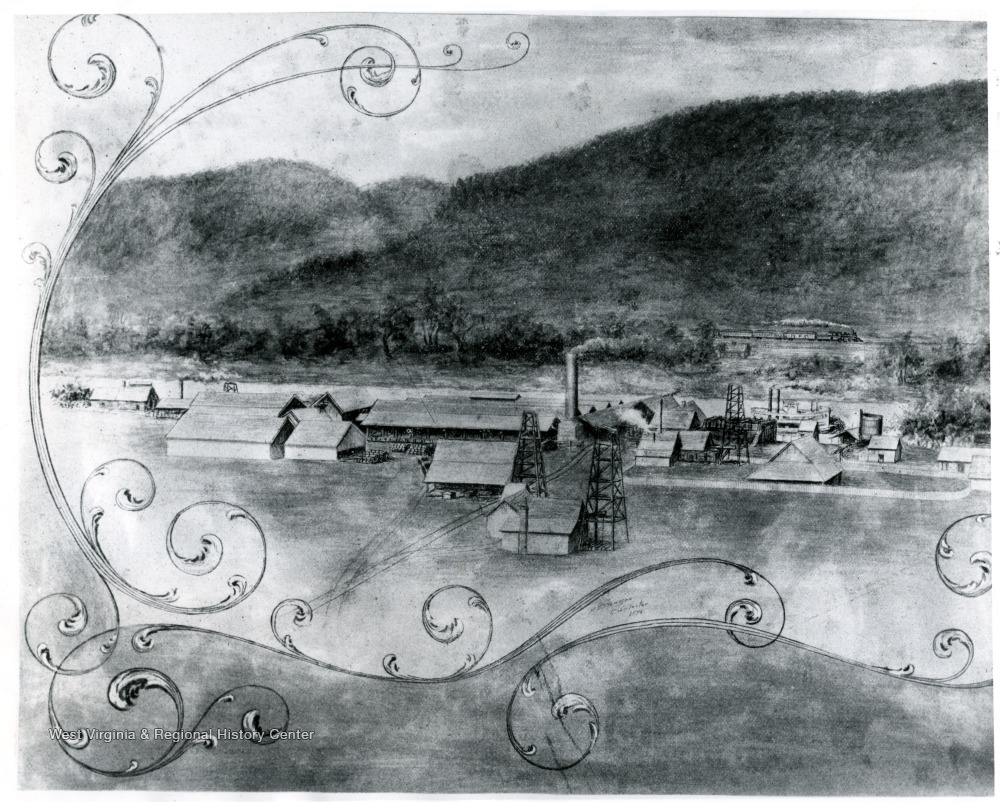 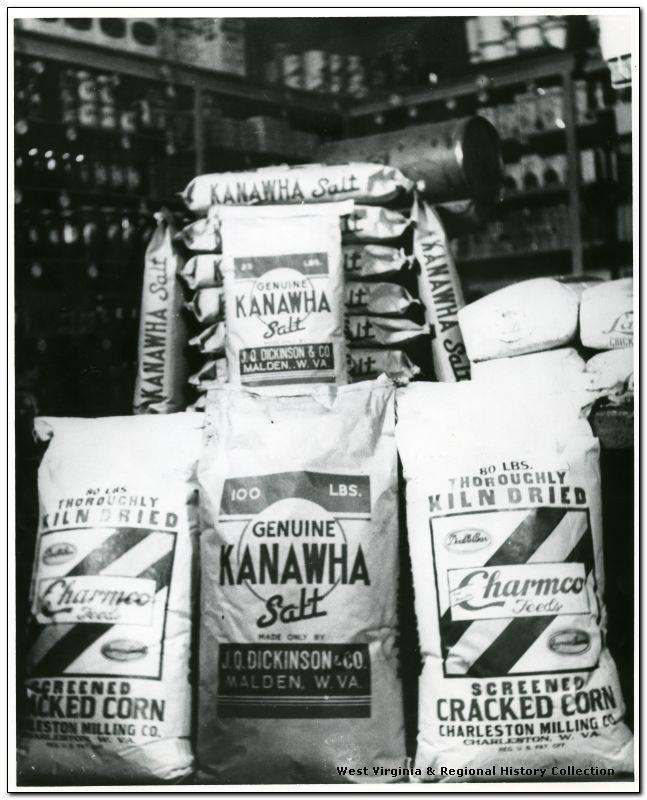 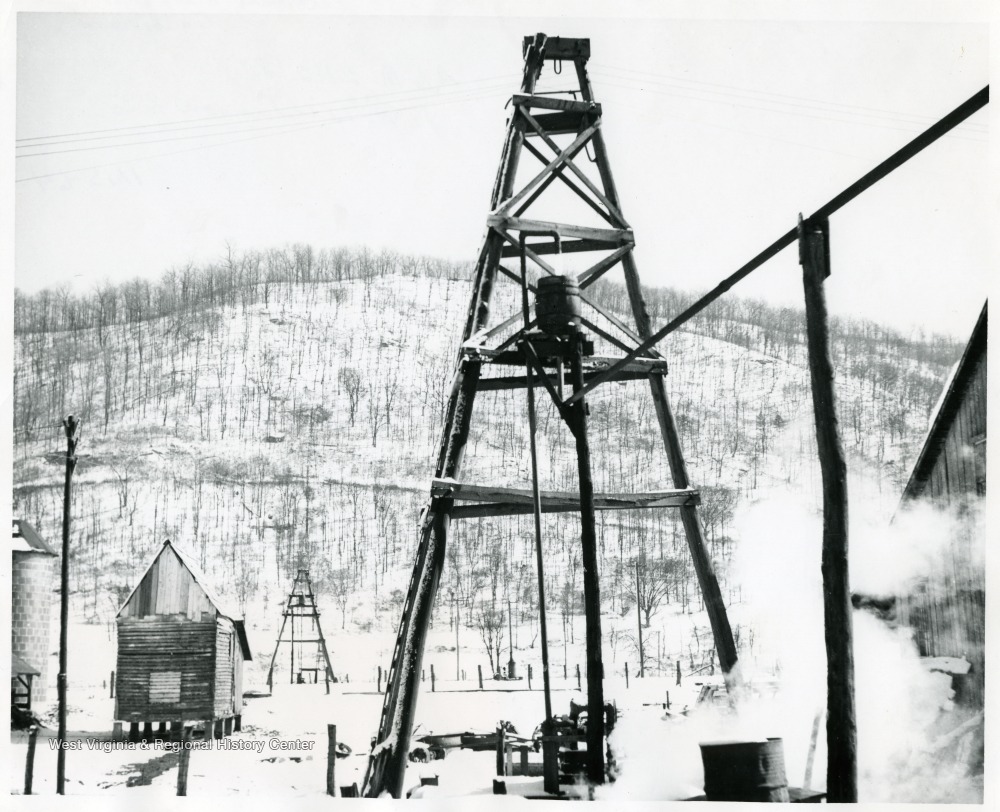 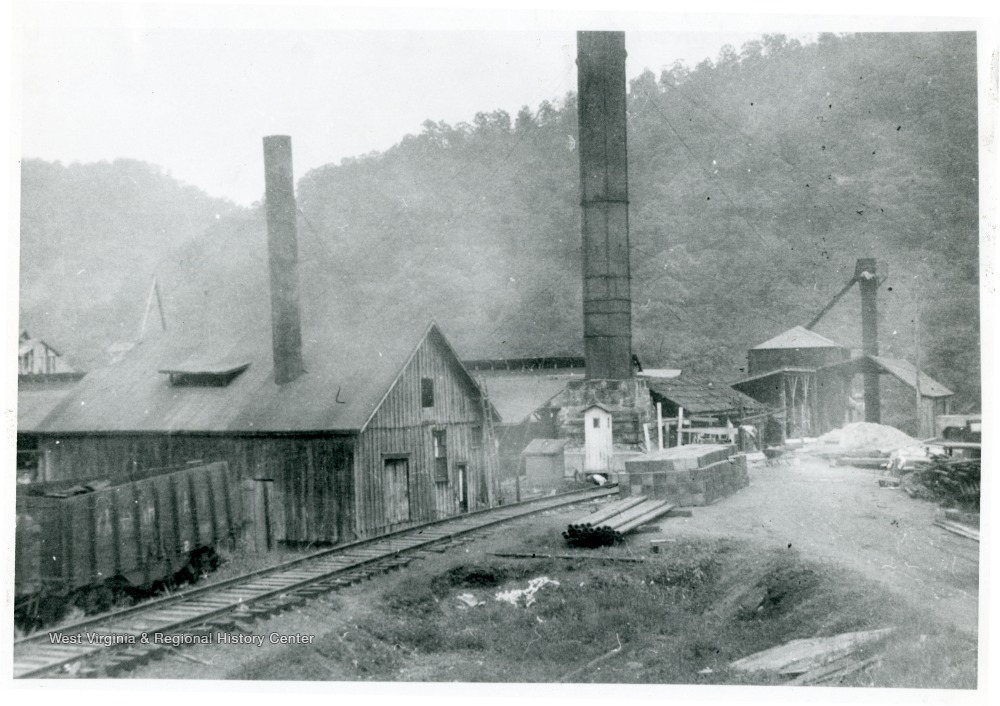 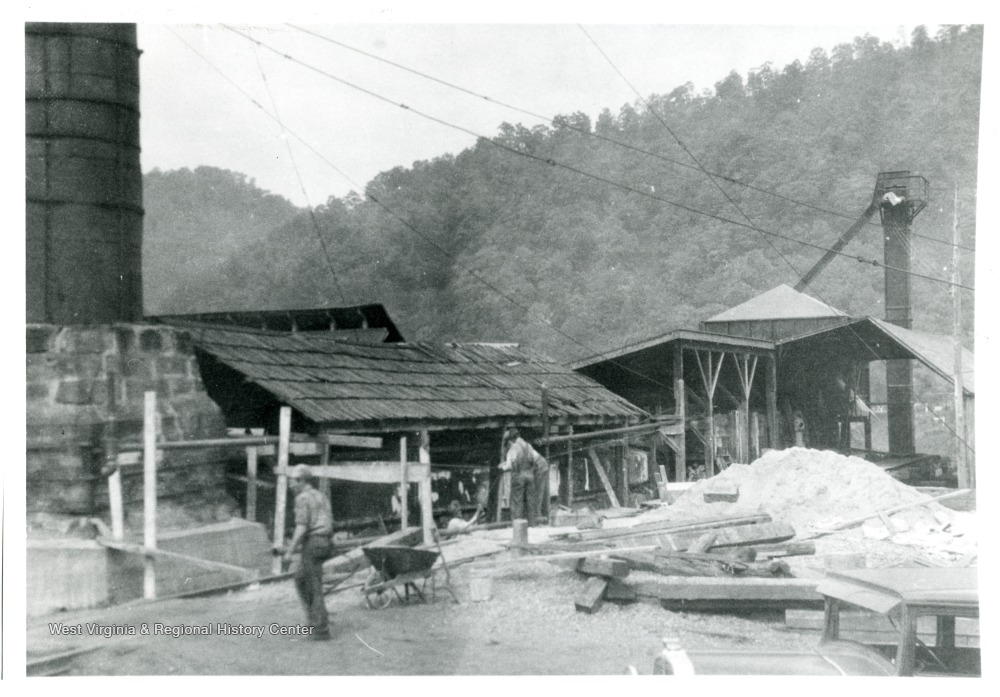 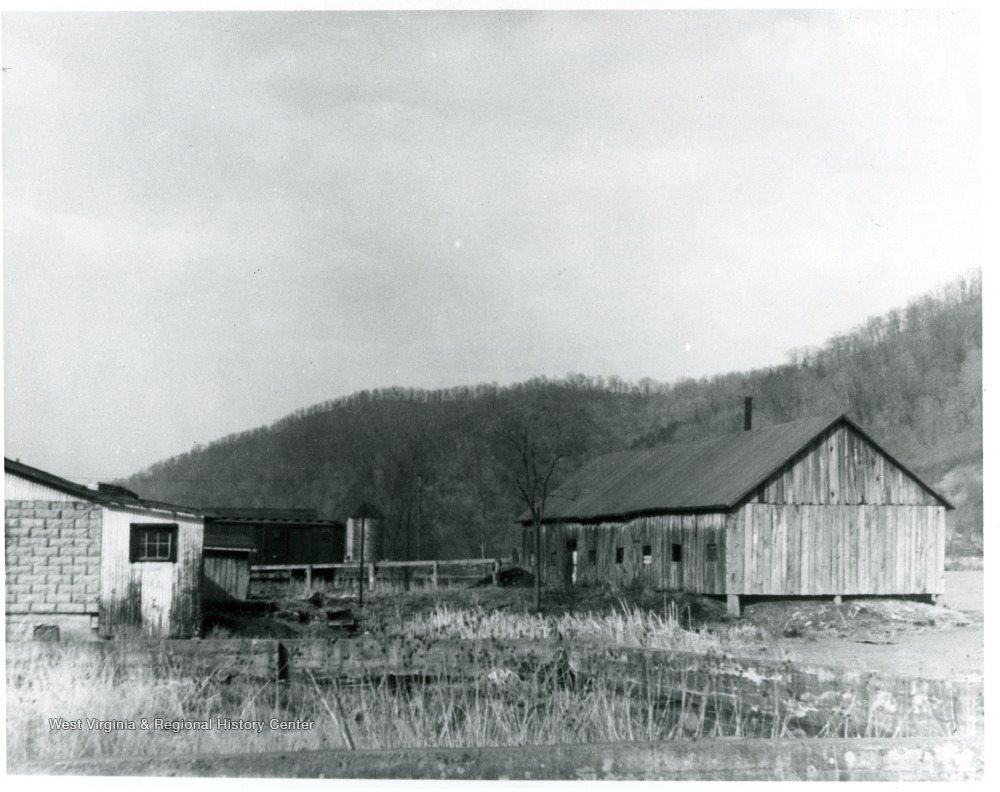 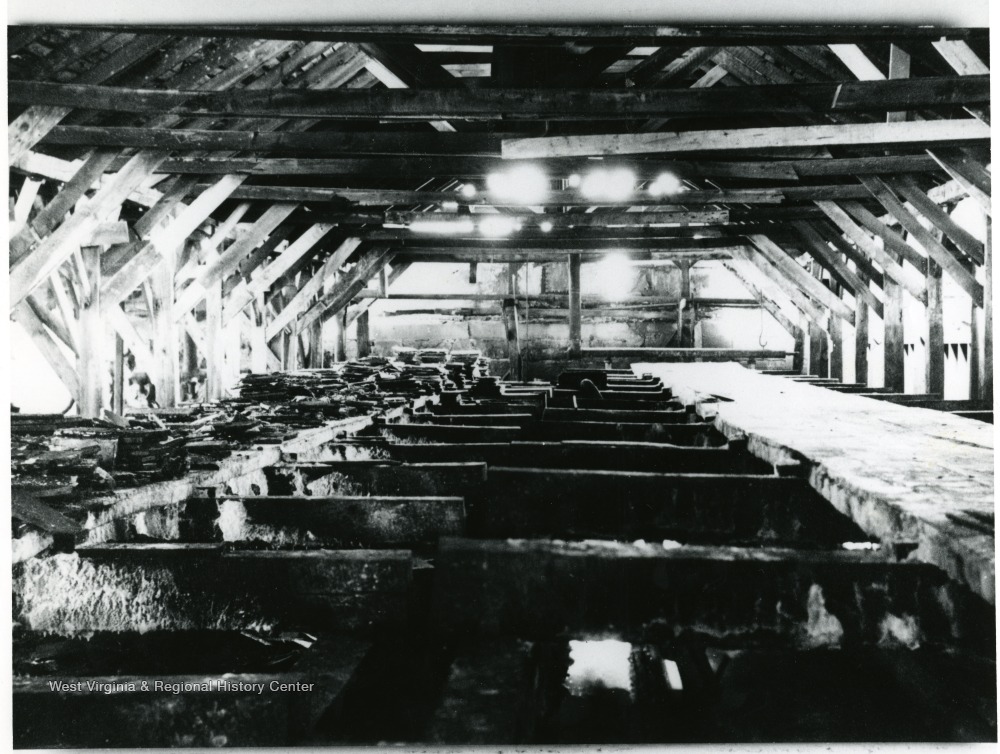 Salt on the assembly line 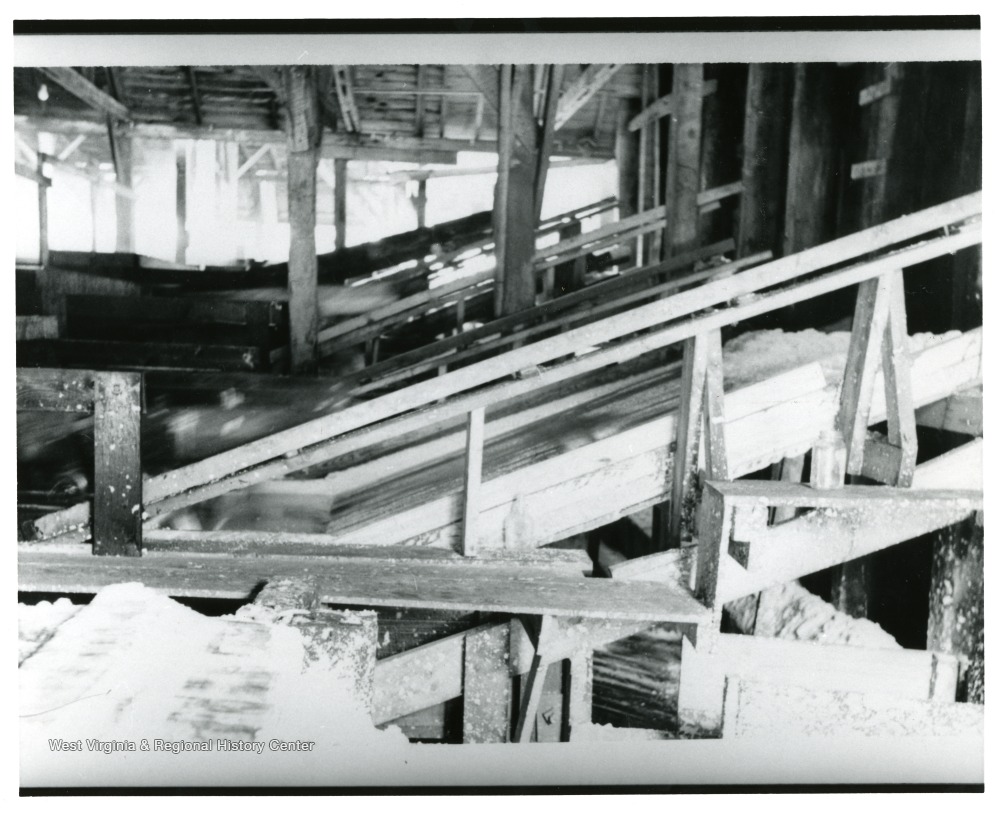 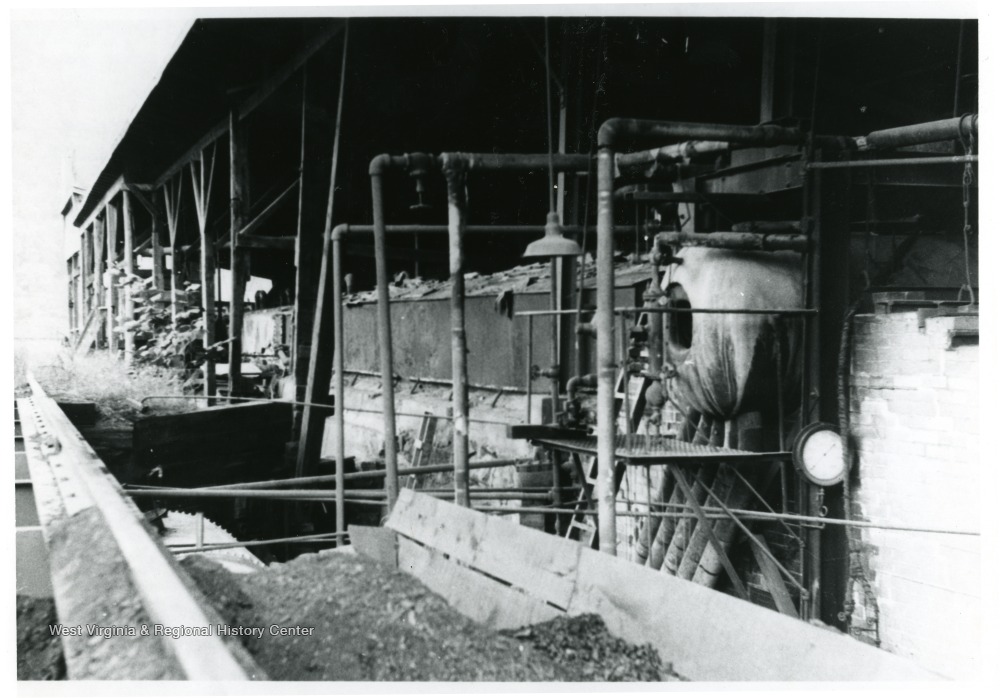 Coal stoker to furnace for boiler 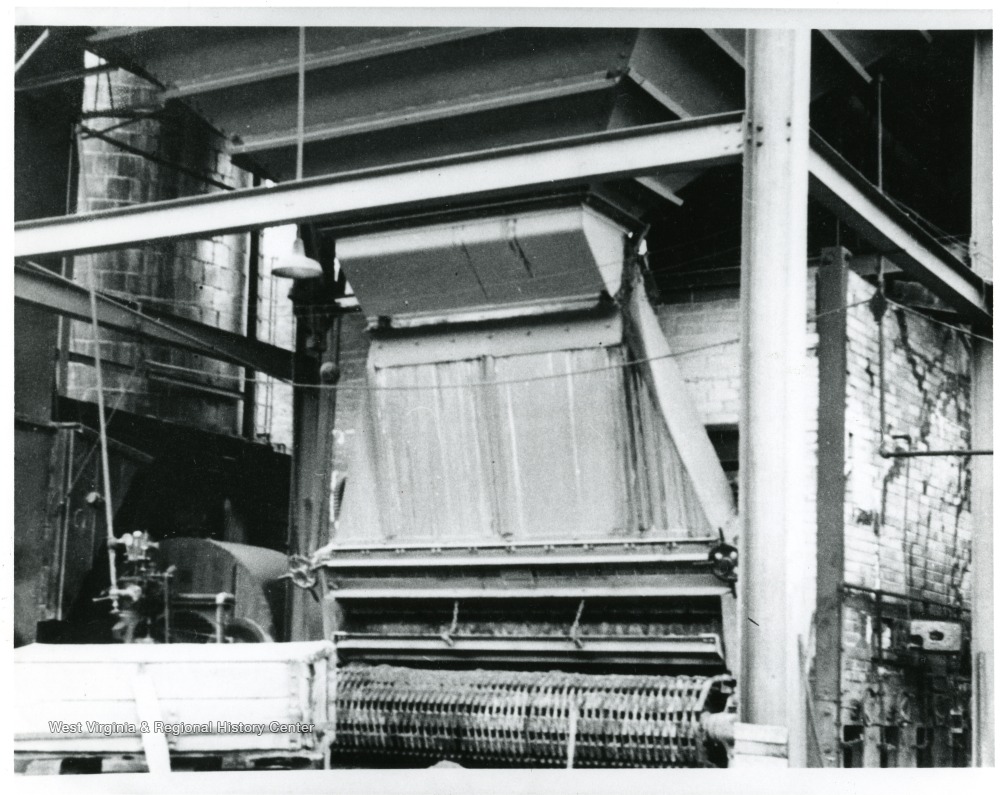 Close up of a Bromine Still 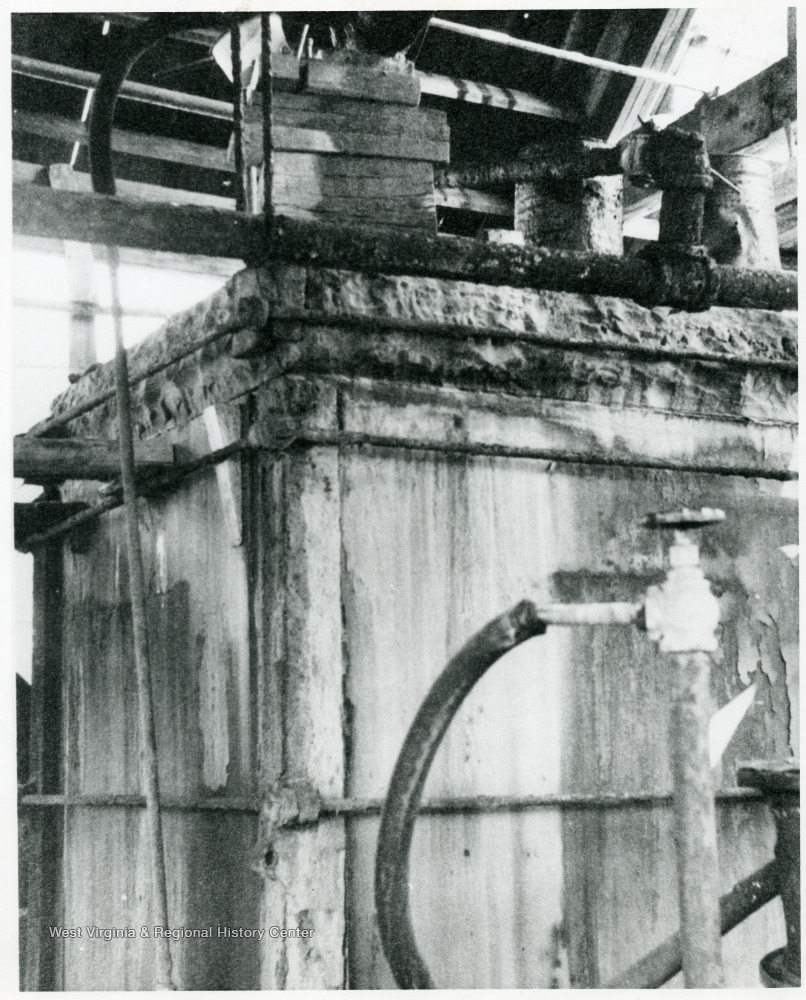 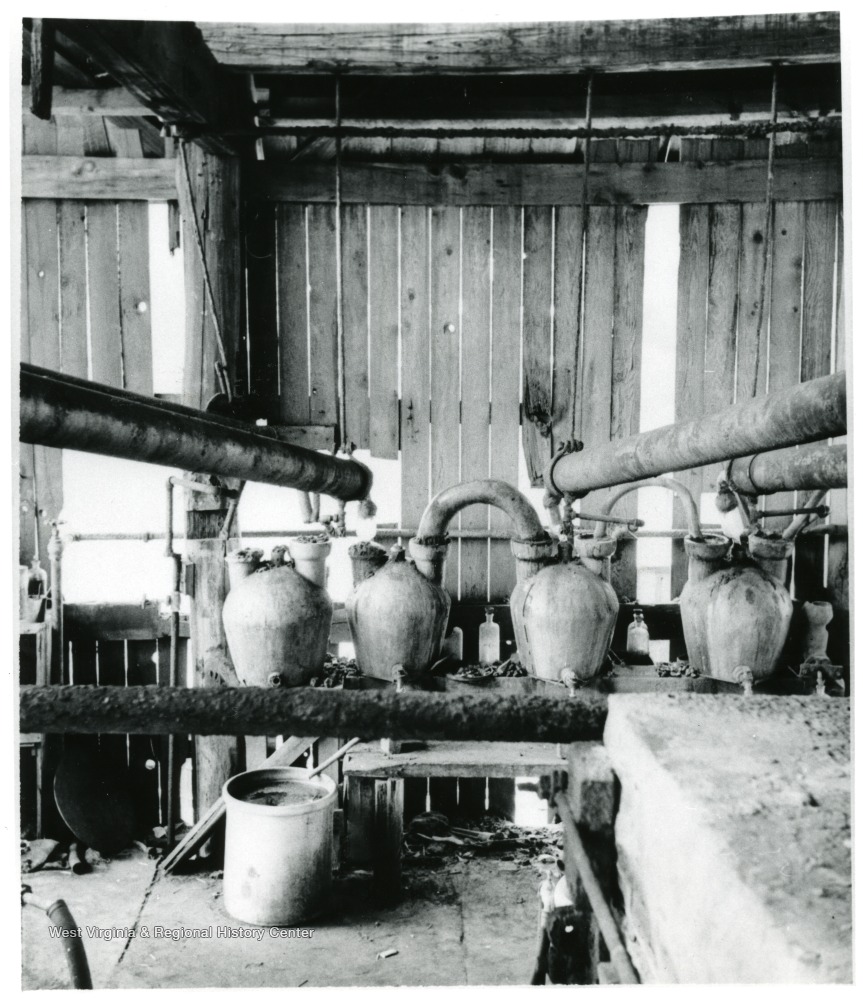 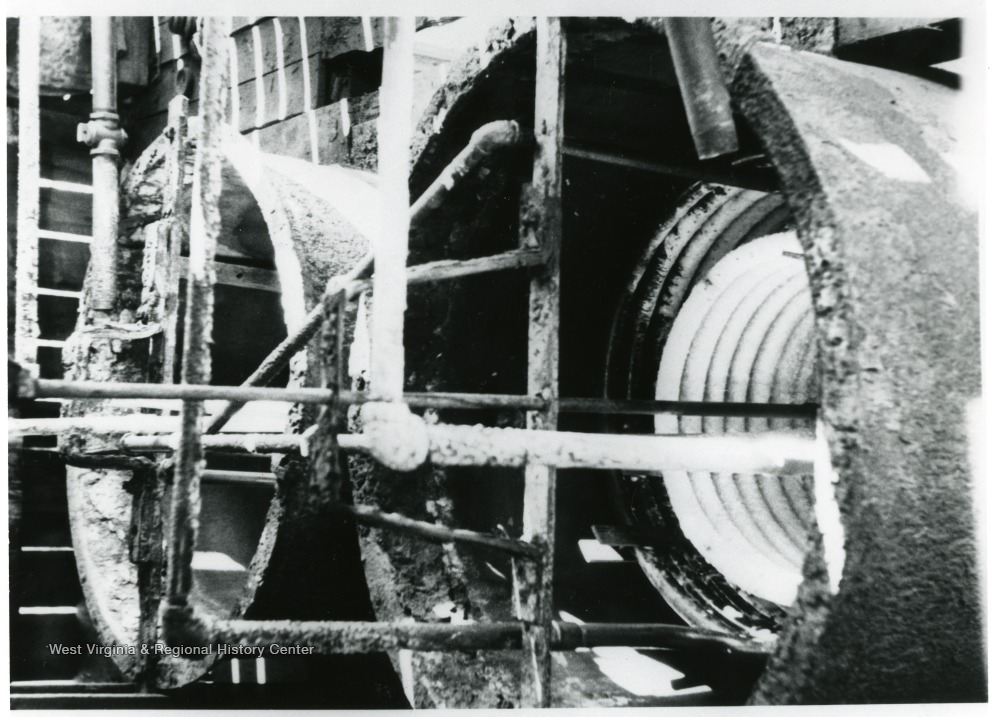 Long before the arrival of white settlers in the Kanawha Valley, salt springs along the river were frequented by wildlife and Native Americans. The water in the springs near the town of Malden - originally called Kanawha Salines - were especially rich in salt, leading them to become known as the Great Buffalo Lick. As settlers pushed westward into the valley, they began producing salt from the springs in order to preserve their own food, and soon sought to commercialize the resource as well. Salt manufacture had the potential to be lucrative, since salt was a rare and expensive commodity that had to be imported into the United States at the time. In 1797, Elisha Brooks set up the first salt furnace for commercial manufacturing, ushering in an era of rapid industrialization along the Kanawha. Within a few years, Brooks and other early salt makers were shipping bushels of salt up the river to the meat-packing center in Cincinnati.

Others followed suit, and soon salt furnaces could be found on both sides of the river from Charleston east to Malden. In 1808, brothers David and Joseph Ruffner succeeded in boring a well several hundred feet deep, the first deep well west of the Alleghenies. Within two years, they and other entrepreneurs had built sixteen furnaces and developed a standardized method for producing salt. Salt-making was a relatively simple but labor-intensive process. First, steam engines pumped brine from one or more wells to an elevated tank, from which the water ran into the evaporator, a giant flat pan heated by steam. As the brine evaporated, the salt crystallized and was skimmed onto drain boards. After a drying period, the salt was transported to a storage house where it was packed into barrels before being loaded onto boats and shipped away.

The Kanawha salt industry was a site of technological experimentation as well as business innovation. The industry boomed during the War of 1812, during which the United States could no longer import salt from abroad, and by 1815 there were 52 furnaces in operation in the Kanawha Salines. In 1817, David Ruffner became the first to use the abundant coal in the area as a cheap fuel to power the salt furnaces. Soon, all saltmakers had switched from wood to coal, thereby launching the West Virginia coal industry. That same year, local salt makers joined together to form an output pool called the Kanawha Salt Company in order to regulate the quality and price of salt and discourage foreign competition. Although it only remained in operation for a year before economic troubles caused its dissolution, the Kanawha Salt Company is regarded as the first trust in the United States.

By the 1830s, the Kanawha Valley was the largest salt manufacturing center in the United States. In 1846, over 3.2 million bushels of salt were produced at the salt-works and shipped across the country. By this time, the once serene valley had been transformed: salt furnaces and well rigs crowded the riverbank, with rail lines bringing coal from mines in the surrounding hills. The valley buzzed with activity, leading many travelers to remark upon the noise of the steam engines and machinery, and the coal smoke, ash particles, and cinders in the air. Anne Royall, one of America’s first female journalists, passed through the Kanawha Valley in 1826 and recorded her observations of the crowded salt-works:

“These salt-works are dismal looking places; the sameness of the long low sheds; smoking boilers; men, the roughest that can be seen, half naked; hundreds of boat-men; horses and oxen, ill-used and beat by their drivers; the mournful screaking of the machinery, day and night; the bare, rugged, inhospitable looking mountain, from which all the timber has been cut, give to it a gloomy appearance (The river, which is extremely beautiful, is the only relief to the scenery.).”

Twenty years later, author Henry Howe described a similar scene in his Historical Collections of Virginia, though in a more favorable tone:

“The chimneys of the salt manufactories pour forth, at short intervals of space, their curling masses of Black vapor, while swarms of laborers, and others connected with these establishments, are continually passing to and fro, present a pleasing coup d'oeil of incessant activity and industry.”

At its peak in the mid-1840s, the salt industry employed up to three thousand people, the majority of whom were slaves. Nearly half of the enslaved workers were leased annually from plantations in Kentucky and eastern Virginia, rather than owned by the salt manufacturers themselves. Slaves often had to make a difficult journey across mountains and rivers to reach their homes for the traditional Christmas holiday and return to the Kanawha Salines after the typical January 1 date on which their leasing contracts commenced. The exact number of slaves at the Kanawha salt works is unclear because of the transient labor population and a lack of records, but it is estimated that up to 1,500 slaves labored in the valley at its peak. With many salt-works operating seven days a week, despite laws forbidding people from working on Sundays, salt making was a grueling and dangerous process that could lead to injuries and even deaths. Living conditions were also often unsanitary, with outbreaks of cholera and smallpox occurring at a higher frequency than elsewhere.

During the 1850s, the economy of the Kanawha Salines entered a depression from which it would never recover, as brine fields were discovered and developed in other parts of the country and the meat packing industry in Cincinnati shifted further west. The onset of the Civil War further harmed salt manufacturing in the valley, disturbing the flow of normal commerce and throwing the future of its labor supply into question. To make matters worse, a flood occurred on September 29, 1861, during which the Kanawha River crested nearly seventeen feet above flood stage. After the Civil War, the devastation of the 1861 flood and the damage caused by the years of conflict left the Kanawha salt industry in shambles. By the 1870s, only one or two salt manufacturers remained in operation in the valley. As the salt industry declined, Charleston developed into a commercial and governmental center, leaving the formerly bustling Kanawha Salines to stagnate.

What remained of the Kanawha Valley salt industry was eventually replaced by a booming chemical industry. The first chemical facilities were constructed during the decades that followed the Civil War, as the salt industry declined and bromides and potassium began to be developed at the salt licks. Commercial production of chemicals did not fully begin until the First World War, however. Germany had been the leading global producer of chemicals, but the outbreak of war in 1914 meant that the United States was forced to look elsewhere for chemicals, especially once the nation entered the war three years later. The Kanawha Valley’s plentiful salt, coal, oil, and natural gas resources attracted the attention of government officials, and soon chemical plants - primarily manufacturing explosives - were being constructed along the river. After the war, numerous chemical companies took advantage of the facilities that were already in place. Though most of these companies closed or merged with others over the years, they came to form the basis of a large chemical industry. The valley prospered again during World War II, with the development and production of synthetic rubber from butadiene and styrene, both of which were already in production in the area. The local industry reached its peak employment in the 1950s before beginning a slow decline as corporations built larger facilities elsewhere in the state, the country, and abroad. Despite its gradual decline, however, the chemical industry remains a substantial part of West Virginia’s economy today.