The Eleazer Arnold House is a historic house built by Eleazer Arnold. Build in about 1693, the home is located in the Great Road Historic District of Lincoln, Rhode Island. It is now a National Historic Landmark, owned by Historic New England, and open to the public for tours. 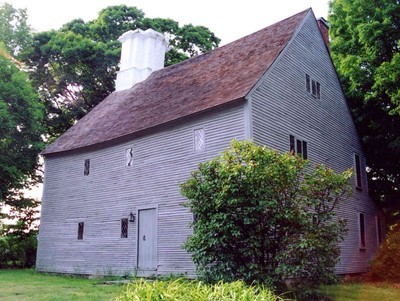 Arnold House is a rare surviving example of a stone-ender, a once-common building type. It features a massive chimney end wall. Built by Eleazer Arnold in 1693, the house features stone work that reflects the origins and skills of the settlers who emigrated from the western part of England. It was built two stories in height, with four rooms on each floor, a lean-to, exposed fieldstone end-walls, wooden side-walls, and a pilastered chimney. Arnold operated the structure as a “Publick House,” serving tavern customers in the great room of the house.

In 1919, the house was donated to Historic New England. It has since undergone two phases of restoration. In 1920, the first stabilization efforts were led by Norman Isham. Thirty years later, the house and chimney received a thorough structural rehabilitation. In this second restoration, later alterations were removed to return the building to its 17th-century appearance.

The house was listed on the National Register of Historic Places in 1968, and was declared a National Historic Landmark in 1974 for its architectural significance.

Visitors to the home find evidence of seventeenth-century construction methods, eighteenth-century additions, nineteenth-century graffiti, and the twentieth-century approach to preservation that restored the house to its present appearance.