The Clemence-Irons House is a historic home in Johnston, Rhode Island. Built by Richard Clemence in 1691, it is a rare surviving example of a "stone ender," building type first developed in the western part of England and common in colonial Rhode Island. The house is listed on the National Register of Historic Places and is a historic house museum owned and operated by Historic New England. 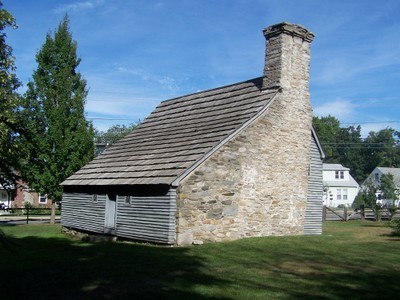 Built by Richard Clemence in 1691, Clemence-Irons House is a rare surviving example of a "stone-ender," a once common building type with roots in the western part of England.  Passing through a series of owners in the eighteenth, nineteenth, and twentieth centuries, the house had grown to thirteen rooms by 1938, when it was purchased by Henry Sharpe and his sisters, Ellen Sharpe and Louisa Sharpe Metcalf.

The Sharpe family valued the great age of the house and recognized its stone-ender characteristics.  They commissioned Norman Isham, who had directed restoration efforts at nearby Arnold House in 1920, to investigate the structure and restore the house to its seventeenth-century appearance.

For this reason, in addition to being significant as one of the oldest houses in Rhode Island, the Clemence-Irons House is also important as a record of twentieth-century restoration ideas and methods.

The house was donated to Historic New England in 1947.