As one of the largest dams in the world, Grand Coulee Dam measures 550 feet tall, and 5,223 feet long. It is over 450 feet thick at it's base and 30 feet thick at the top. The Grand Coulee Dam contains roughly 11,975,521 cubic yards of concrete-three times as much concrete as was used to build the Hoover Dam. The hydroelectric plant of the dam supplies power to WA, OR, ID, MT, WY, CO, CA, NV, NM, UT, AZ and parts of Canada! This Dam also offers free guided tours and has an amazing laser light show int he evenings. 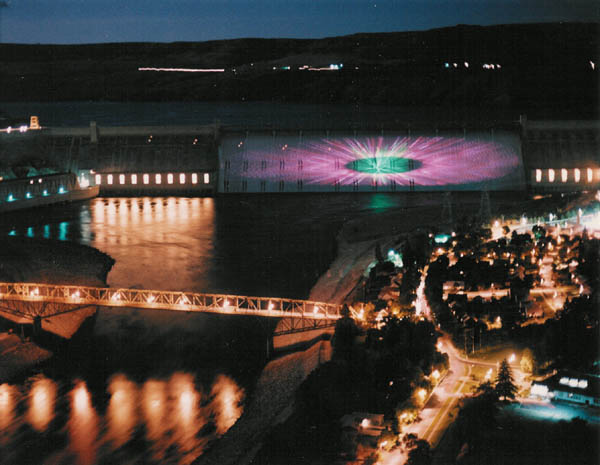 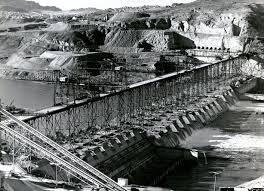 The Grand Coulee Dam is one of the largest, if not the largest concrete structures in the world. It is located in Grand Coulee Washington, roughly 90 miles northwest of Spokane Washington. Like the Hoover Dam in Arizona/Nevada, it is a gravity dam that is operated by the Bureau of Reclamation. All together there are three power plants and six generators. The first power plant began generating power in 1941 and the last generator was completed in 1980. The dam was constructed between 1933 and 1941 with the last power plant being added from 1967-1974.

The Grand Coulee Dam stands an amazing 550 tall, just 174 feet lower than the Hoover Dam. While the Hoover Dam is 1,244 feet long, the Grand Coulee Dam is an astonishing 5,223 feet long, almost a full mile. It took almost 12 million cubic yards of concrete to build this dam, which is three times more than the Hoover Dam. This dam backs up to the 82,300 acre Franklin D. Roosevelt Lake. The lake is named after Roosevelt due to him promising Washington senator Clarence Dill he would “build it if he won” (Grand Coulee) his election to President.

According to the U.S. Department of the Interior Bureau of Reclamation, you could build a sidewalk that would stretch around the equator, twice! It’s a good thing the Dam can provide enough power to recoup the cost it took to build it. Due to it’s size and the dams ability to produce more than three times the amount of power than the Hoover Dam (GC=6,809 megawatts/HD 2,078 megawatts), it is no wonder it is able to supply power to: WA, OR, ID, MT, WY, CO, CA, NV, NM, UT, AZ and Canada.

You can visit the Grand Coulee Dam most of the year. It has an amazing light show that I used to go to when I was a child and a great tour, which is free. The dam and its surrounding areas also create a great place to fish and explore.