In the summer of 1813, Creek Indians and American settlers teetered on the brink of war. A faction of Creeks known as the Red Sticks wanted to prevent further white encroachment on Indian lands. As the threat of violence grew, settlers built Fort Sinquefield for protection, a hastily built wooden stockade fort built just southeast of present day Grove Hill, Alabama. On September 1, 1813, Red Sticks attacked and killed over a dozen settlers at nearby plantation. The following day, 100 Red Sticks under Red Stick leader Josiah Francis attacked Fort Sinquefield. The settlers managed to find safety in the fort and fend off the Red Sticks for two hours before the Indians finally left. Today, the site of Fort Sinquefield is preserved by the Clarke County Historical Society, and a stone marker is dedicated to the 1813 attacks.

The stone marker at the site 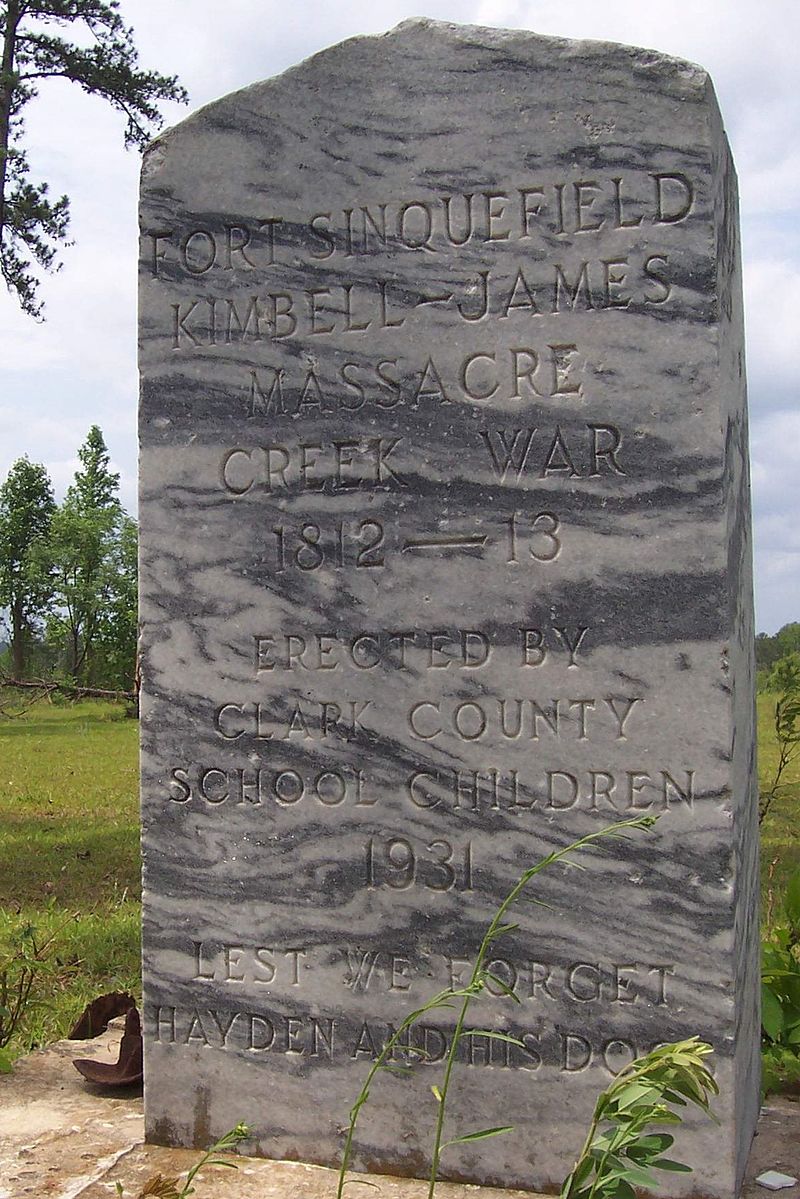 A self-portrait of Josiah Francis, a Red Stick religious leader who led the attack on Fort Sinquefield 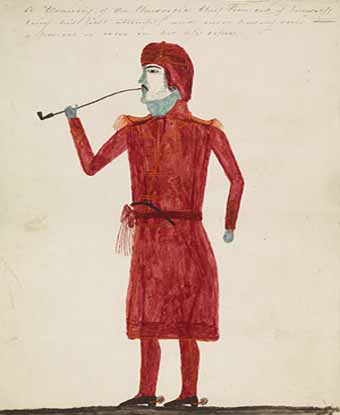 In the summer of 1813, tensions simmered between American settlers in Mississippi Territory (which included present day Alabama) and Creek (or Muscogee) Indians. The Creeks had fallen into civil war in the previous months, and the conflict threatened to spill over into American settlements. A faction of the Creek tribe known as the Red Sticks viewed American settlers as unwelcome invaders of Creek territory. While the Red Sticks warred with more peaceable members of their tribe, they also reached out to Spanish authorities in Pensacola to secure a pipeline for more ammunition, gunpowder, and other supplies. In July, American militia and Red Stick warriors clashed for the first time at the Battle of Burnt Corn, where the Red Sticks emerged victorious. Panic swept the Mississippi countryside as American settlers prepared for the possibility of Creek attacks.

Fort Sinquefield, erected in present-day Clarke County, was built among this season of fear. Constructed to protect local settlers in the summer of 1813, the fort was a simple affair. A 12-foot tall wooden palisade enclosed roughly a half-acre of land, while at the center stood a two-story blockhouse from which defenders could fire over the fort’s walls. Nearby Bassett’s Creek provided a source of water. Perhaps as many as 15 families used the fort as shelter, and their cloth tents dotted the interior.

On September 1, 1813, Red Stick Creeks struck in the area, attacking the plantation of Ranson Kimbell, where twenty-one members of the Kimbell and Abner James families had gathered. These two families had left Fort Sinquefield, tired of its hot, cramped confines. It proved a fatal mistake. The Red Sticks struck at 3 o’clock in the afternoon, killing a dozen settlers. Only two who were present survived the attack: Sarah Merrill and her child. Several others were absent when the attack occurred. They fled to Fort Sinquefield to raise alarm. Also alerted was a larger post, Fort Madison, which sent a small party of militia cavalry to visit the Kimbell plantation and collect the settlers’ bodies.

On September 2, the settlers at Fort Sinquefield were on guard. The militia cavalry arrived with the slain settlers’ bodies. Around noon, the settlers gathered outside the fort’s gates for a mass burial. They were attacked by 100 Red Stick warriors led by Creek leader Josiah Francis (also known as Hillis Hadjo). The settlers rushed inside the fort. In particular danger were a number of women doing laundry at a spring 300 yards from the fort. Quick-thinking militiamen Isaac Hayden let loose some dogs to slow the Indians’ advance, giving time for all but one of the women to reach safety.

With the settlers in the fort, a firefight broke out between its defenders and the Red Stick attackers. For several hours, the two sides exchanged fire. One settler—Stephen Lacey—was killed, as were at least five Red Stick warriors. Stymied in their attempts to take the fort, the Red Sticks ultimately departed. The settlers left Fort Sinquefield and made their way to Fort Madison.

The attack on Fort Sinquefield came just two days after a larger Red Stick attack on Fort Mims. There the Red Sticks proved far more successful, managing to capture the fort and killing over 250 settlers, enemy Creeks, and militiamen. The Red Stick attacks on Fort Mims and Fort Sinquefield marked an important moment in the Creek War, forcing the United States to intervene to quash the Red Stick rebellion. The Creek War came to a bloody end in March 1814 at the Battle of Horseshoe Bend. Decisively defeated by General Andrew Jackson, the Creeks were subsequently forced to cede over 20 million acres of land to the United States at the Treaty of Fort Jackson.

Today, the site of Fort Sinquefield is a small park managed by the Clarke County Historical Society. Several interpretative markers and a partial reconstruction of the fort’s walls tell the story of the fight. Most notable is a stone monument to Fort Sinquefield and the Kimbell-James Massacre. It was erected in 1931 via funds raised by local Clarke County schoolchildren.