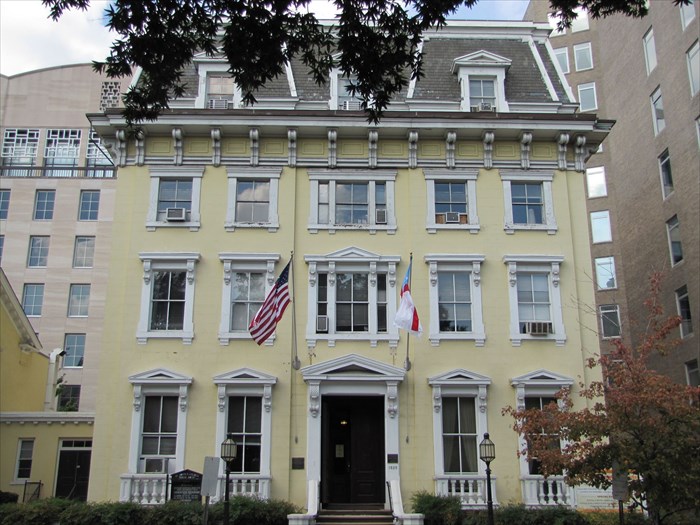 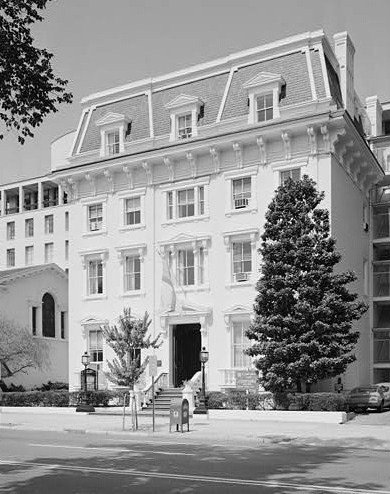 In 1834, Matthew St. Clair Clarke, former clerk of the House of Representatives, purchased the lot on H street on which the present house is situated. By 1836, Clarke had built the house, a four-story brick structure, at the then-extravagant cost of $63,000. Within a few years, pioneering journalist Joseph Gales, owner of the capital's National Intelligencer newspaper, bought the house from Clarke.

Ashburton House was the site of negotiations which resulted in the Webster-Ashburton Treaty of 1842. In 1842, Gales rented his house to Secretary of State Daniel Webster. Webster in turn offered the house as temporary lodgings to the Englishman Alexander Baring, known as Lord Ashburton, who had been sent by the UK government to try to negotiate a treaty that would settle the U.S.-Canada border dispute once and for all.

Although the incident is largely forgotten today, as America’s relationships with both Canada and the UK are now extremely friendly and stable, in the 1830s tensions between the northeastern United States and Canada (and by extension the UK, which ruled Canada at the time) became extremely high, due to an ongoing quarrel over territory. The famous historian Samuel Flagg Bemis has written that this dispute between the two countries was "one of the gravest and most inveterate diplomatic issues of the United States in the generation following the War of 1812." The problem was that the poorly-worded Treaty of Paris of 1783, which ended the Revolutionary War, had failed to resolve the matter of the borderline between the northeastern U.S. and Canada. The parts of America that were at issue were the States of Massachusetts and (particularly) Maine; the parts of Canada that were at issue were the provinces of New Brunswick and Lower Canada (present-day Quebec).

There occurred, in the border areas, increasingly aggressive actions by people on both the American and Canadian sides that seriously threatened war. Canadian lumberjacks entered the disputed, timber-rich Aroostook area in the winter of 1838-1839, and seized the American land agent who tried to expel them. New Brunswick officials arrested some Americans as well. In March 1839, British troops moved from Quebec to the American side of the Aroostook, known by the Indian name of Madawaska. The Maine legislature immediately sent 10,000 men into the disputed Aroostook Valley. The US Congress authorized a force of 50,000 men and appropriated $10 Million to respond to this crisis. The hero of the Mexican-American War, Gen. Winfield Scott, managed to negotiate an uneasy truce with the British negotiator, Sir John Harvey, until a settlement could be reached. Although this international incident has ever after been known as The Aroostook War, it was not a war at all, as there were no combatant deaths or injuries on either side.

The Negotiations at the House

It was a change of government for both the U.S. and the U.K. that helped avert a possible third war between the two countries (following the Revolution and the War of 1812). Martin Van Buren was replaced as president by William Henry Harrison and, after the latter’s untimely death, by John Tyler, who was much more amenable to negotiating with Britain than Van Buren had been. In the U.K., Lord Aberdeen had replaced the much less America-friendly Lord Palmerston as Foreign Secretary. U.S. Secretary of State Daniel Webster contacted his British counterpart to convey that the U.S. government was open to negotiating the dispute regarding the Canadian border, and Alexander Baring, known as Lord Ashburton, was appointed plenipotentiary and sent to America to negotiate with Webster and resolve the crisis.

For 10 months in 1842, Joseph Gales rented the house on H Street to Daniel Webster, who provided it as accommodations for the English delegation, including Lord Ashburton. Ashburton during this period quite amicably negotiated with Webster most of the details of what came to be known as the Webster-Ashburton Treaty of 1842. Representatives of the States of Maine and Massachusetts were also present and took an active part during the negotiations, as their final boundaries were at stake. However, it was definitely not “all work and no play” for the negotiators, since lavish dinners and dances were held at the house, during which the talks proceeded apace. As a result, the Canadian boundary line from Lake Huron in the east to Lake of the Woods in the midwest was definitively settled. (In the treaty, both Britain and the U.S. also agreed to set up a joint squad of ships off the coast of Africa to suppress the slave trade.)

The house served as home for British diplomats between 1949 and 1852 and came to be known as the British Legation. The house was next owned by English author Edward Bulwer-Lytton, and in the 1870s, it was renovated in the French Empire style. Colonel William Freeman, who served as Assistant Attorney General from 1853-56, also owned the house at one point; Freeman added the present mansard roof and large stone frames around the windows.

Other owners of the house included the American Federation of Labor, which sold it in 1954 to neighboring St. John's Episcopal Church, known as the church of the presidents. When St. John’s Church took over the space in the 1950s, they remodeled the third and fourth floors as office space and built a connection between church and parish house as well as an elevator. Authentic period details of the house that remain include six marble-mantled fireplaces and one wood-mantled one, and four floor-length marble columnns on the first floor. The lintels above the doors, the stair railings and the ceiling trim are also considered authentic. The house contains a basement with a dining area, kitchen and meeting rooms. It is currently used by the parish house of St. John’s as a meeting space, a nursery, and as the setting of the church’s weekly parish lunch.