The establishment and growth of Gainesville is partly due to the introduction of the Florida Railroad, which opened up the interior of Florida for both settlement and trade. Connecting the Atlantic and the Gulf, the Florida Railroad arrived in Gainesville in 1859, reaching Cedar Key by 1861. Since the founding of Gainesville, railroads have played an extensive role in the city’s economy and standards of living. With the Savannah, Florida & Western Railroad and the Florida Southern Railroad running north-south and the Florida Railroad running east-west, the Gainesville Depot presented a crossroads within the state, allowing for extensive growth and development through abundant shipping services. As demand for Florida agricultural products and tourism grew in the early 20th century, more extensive railroad networks crisscrossed the state. The last railroad passenger service in Gainesville ended in 1971, but the Old Gainesville Depot remains as a window into the fascinating history of railroads traversing central Florida. The Depot is listed on the National Register of Historic Places. 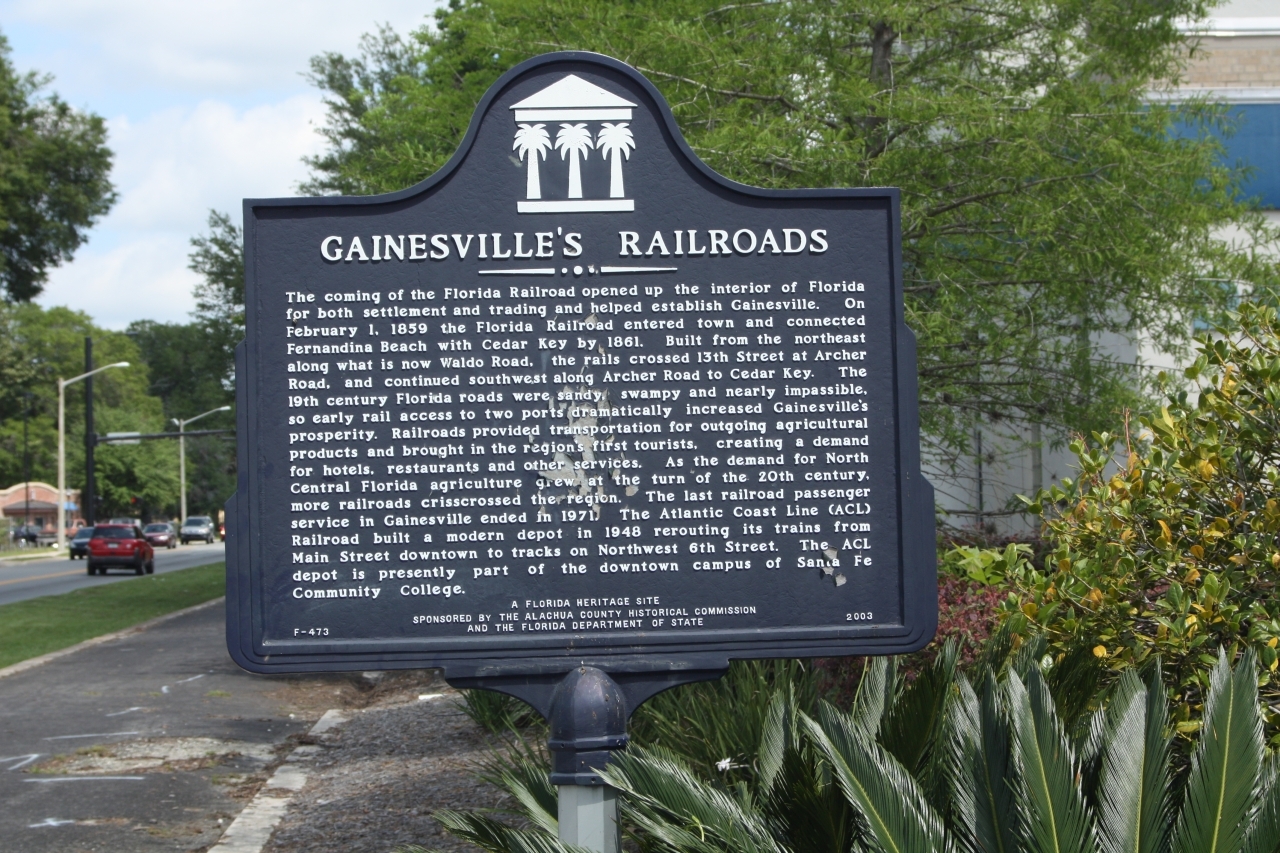 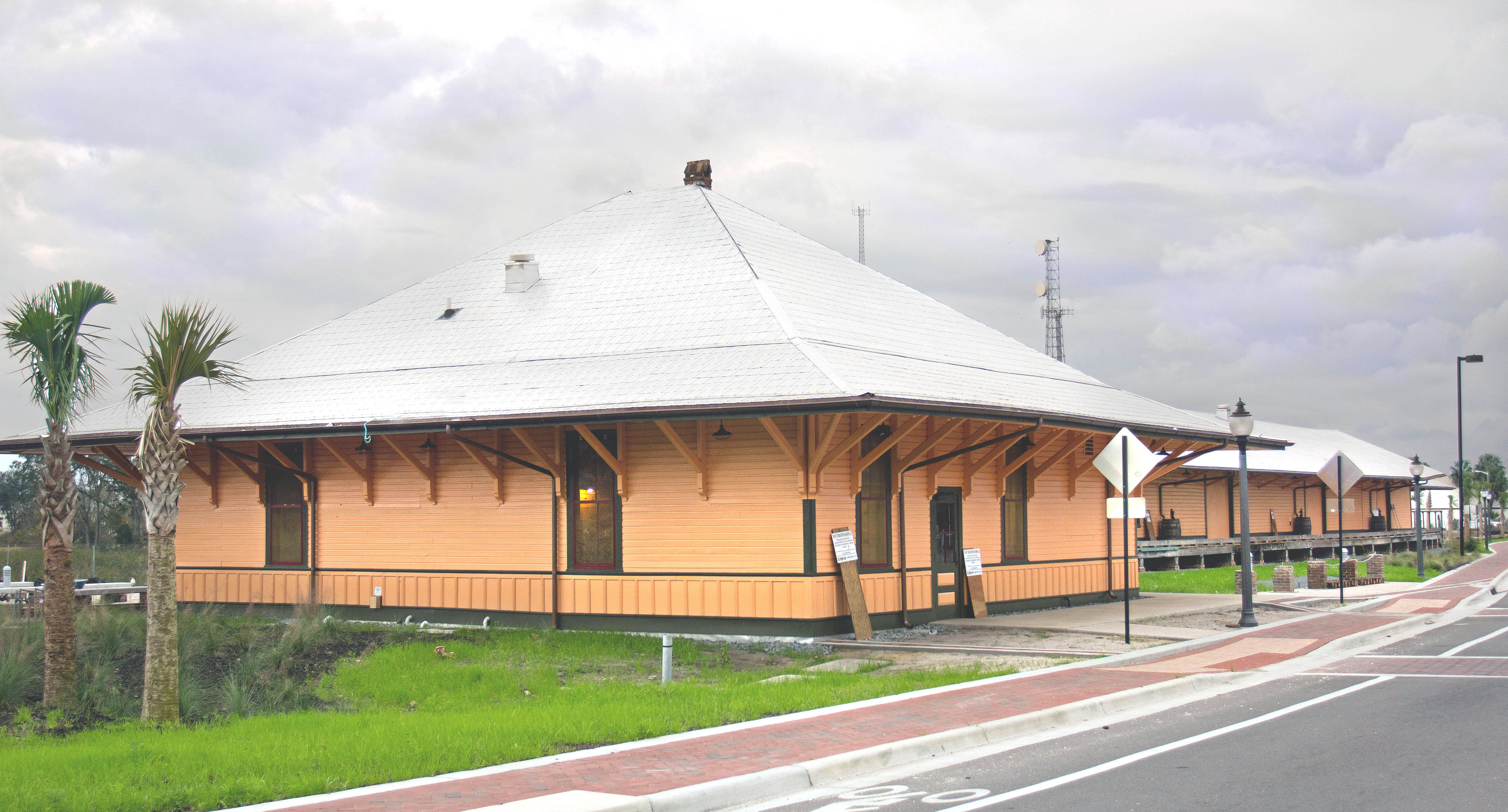 One of Florida Southern's first locomotives at Gainesville, Florida in 1881. 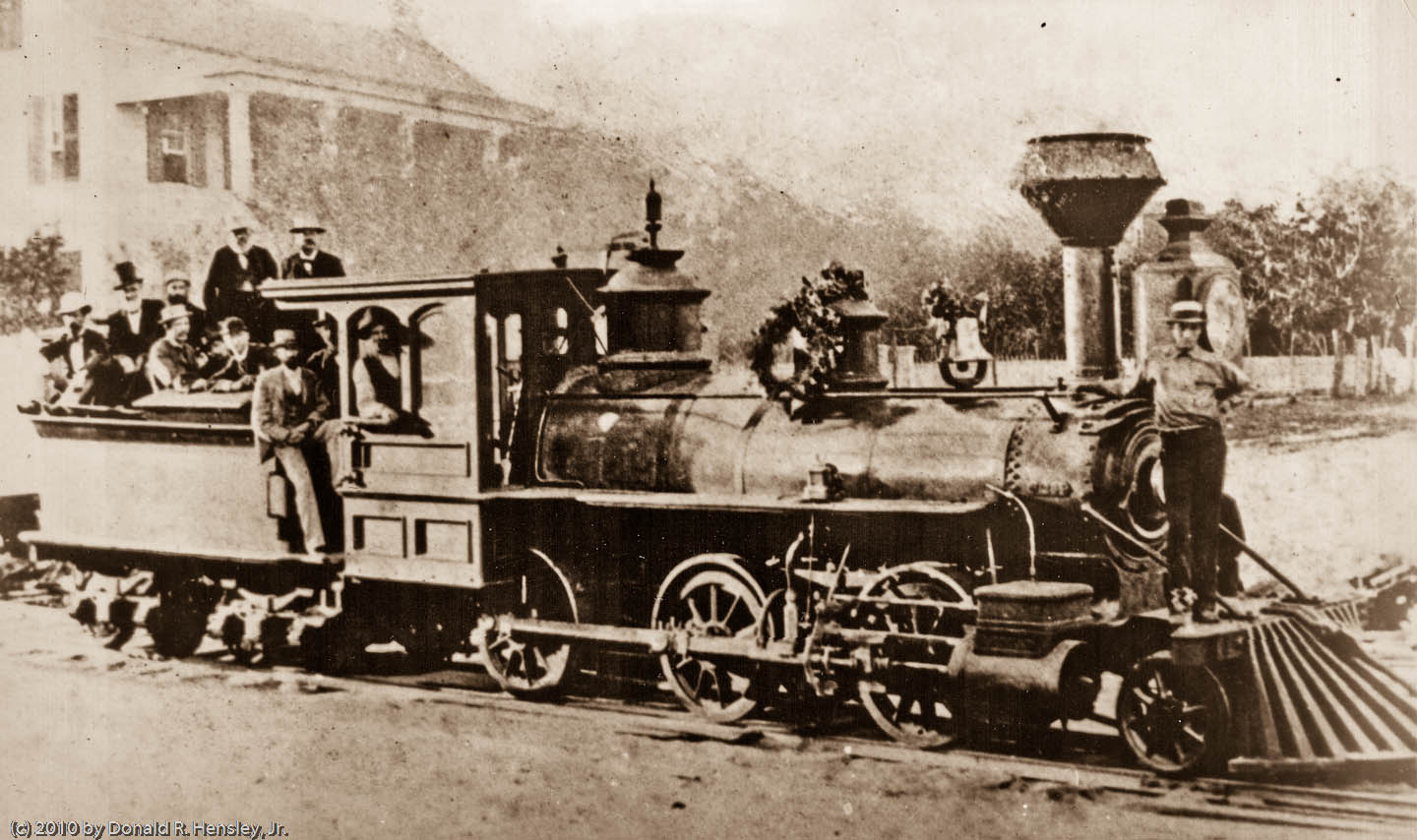 Importance of the Railroad to Gainesville

One of the most striking facts about Gainesville is that, if it wasn’t for the railroad, the city was almost named Lewisville or Hogtown. Actually, Hogtown existed much before Gainesville, as it was a small settlement of 14 people in 1824. Before the arrival of the railroad, the county seat of Alachua County was Newnansville, but when the Florida Railroad Company proposed its route from Fernandina to Cedar Key, the route was miles away from Newnansville. As such, county commissioners platted a site for a new town along the rail. Votes were cast, and the town was named Gainesville on September 6, 1853, honoring Seminole Indian General Edmund P. Gaines. By 1856, Gainesville had acquired its first courthouse.

The railroad opened Gainesville's economy by reshaping First of all, the land route connecting Florida’s eastern and western coasts was notorious for its swamp and thick forests, making overland travel excruciatingly slow and difficult. Furthermore, as the water route passed through the Straits of Florida near the Florida Keys, travel by sea resulted in many wrecked ships. Thus, the establishment of the Florida Railroad allowed cargo from ships in the Gulf to be transferred to ships on the Atlantic side, without delays on land or the possibility of shipwreck.

Actual construction of the railroad began in 1855, and it was completed through the following dates:

By 1860, the Gainesville population had reached 269 people. Development slowed during the Civil War as Gainesville served as a Confederate Storehouse, but during reconstruction, Gainesville thrived as one of the largest cotton shipping stations in Florida. Cotton shipping enabled other industries to form, and by 1882, with two other railways servicing the citrus and vegetable farming industries, Gainesville’s population reached nearly 2,000.1

Also known as the Seaboard Air Line Depot or the Baird Warehouse, the Old Gainesville Depot was built around 1860 to serve the Florida Railroad. Shortly after its construction, during the Battle of Gainesville in 1864, Union Troops occupied the Depot for two hours before Confederate forces took it back.

The Depot was later an example of racial segregation in the 19th and 20th centuries, as between 1892 and 1897, the Depot was remodeled to provide a passenger room for whites and another passenger room for African Americans. A separate depot was later built in 1910, featuring the same segregated layout. On November 22, 1996, the Old Gainesville Depot was added to the National Register of Historic Places. In 1999, after decades of diminished use, the Depot was  acquired by the City of Gainesville, who restored it to its 1910 colors and styles.2

The coming of the Florida Railroad opened up the interior of Florida for both settlement and trading and helped establish Gainesville. On February 1, 1859 the Florida Railroad entered town and connected Fernandina Beach with Cedar Key by 1861. Built from the northeast along what is now Waldo Road, the rails crossed 13th Street at Archer Road, and continued southwest along Archer Road to Cedar Key. The 19th century Florida roads were sandy, swampy and nearly impassible, so early rail access to two ports dramatically increased Gainesville's prosperity. Railroads provided transportation for outgoing agricultural products and brought in the region's first tourists, creating a demand for hotels, restaurants and other services. As the demand for North Central Florida agriculture grew at the turn of the 20th century, more railroads crisscrossed the region. The last railroad passenger service in Gainesville ended in 1971. The Atlantic Coast Line (ACL) Railroad built a modern depot in 1948 rerouting its trains from Main Street downtown to tracks on Northwest 6th Street. The ACL depot is presently part of the downtown campus of Santa Fe Community College.

Past Railroads of Gainesville

Gainesville's first railroad, the Florida Railroad, was started in 1859. In 1881, the Florida Southern Railroad reached town from Palatka, Hawthorne and Rochelle, entering at South Main Street from Hawthorne Road and running the length of Main Street to 8th Aveenue. A route from Rochelle provided service to Ocala. Three years later, the Savannah, Florida & Western Railroad linked to these tracks, providing service through Alachua to Waycross, Georgia. The two lines merged in 1902, becoming the Atlantic Coast Line Railroad, providing service from Tampa Bay to New York. ACL trains ran in the middle of Main Street stopping for passengers to use the city's hotels. In 1895, the Gainesville and Gulf Railroad built a line to Micanopy along NW 6th Street. By 1899, the rails reached south past Fairfield to Emathala and north to Sampson City. The Gainesville and Gulf was sold in 1906 and renamed the Tampa and Jacksonville or T&J. In 1900, the Seaboard Air Line Railroad (SAL) was established and acquired the old Florida Railroad right-of-way through Gainesville. When the SAL bought the T&J in 1926, it was renamed the Jacksonville, Gainesville & Gulf. This line was abandoned in 1943.3