Founded in 1966, the Baltimore Streetcar Museum educates visitors about Baltimore's public transit systems, especially its streetcars. The museum offers rides in its historic streetcars, thanks to the hard work of volunteers who helped construct tracks and install wire.

An 1896 open car in operation at the Baltimore Streetcar Museum 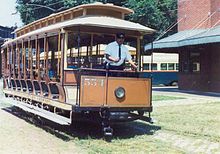 Baltimore is the home of the country's earliest commercially-run electric streetcar, which took its first journey in 1885. Streetcars replaced older forms of transit such as horse-drawn cars. Increased use of streetcars contributed to the expansion and suburbanization of the city.

By the 1910s and 20s, however, cars were entering the transportation scene. Using efficient assembly lines, Henry Ford's cars could be produced more quickly than ever. As the number of cars increased, the city invested in improving roads and eventually in developing a bus system. The last electric streetcar ran in 1963.