The Smyrna History Museum is located in a replica of a train depot erected in 1910 (the original was torn down in 1959). 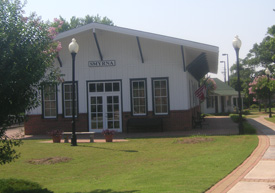 The Smyrna Historical & Genealogical Society was incorporated in 1985. The original incorporators were former Smyrna Mayor Harold Smith, his wife Betty, and Emmett Yancey. The purpose of the society was to collect and preserve artifacts and archival material relative to the City of Smyrna and the surrounding area. Another goal was to establish a museum and research library for the use of members and the public. The Smyrna History Museum opened to the public on Saturday, April 25, 1992. The first exhibit was created from photos and memorabilia which had been collected and stored at the Smith’s home for several years. The original location was 2858 King Street.

In 1993, Mayor Bacon revealed a plan for the future Smyrna Museum. He stated that a replica of the former Western and Atlantic railroad station which was demolished in the late 1950s would be constructed near the site of its previous location at the intersection of Atlanta and Spring Streets. The Smyrna Museum had it's grand opening on April 25, 1999. The Museum is staffed by volunteers from the Smyrna Historical Society, the Smyrna Golden K Kiwanis Club, and other individuals who have an interest in preserving this history of the city.