The Dade Battlefield Historic Memorial is the location of a massacre and skirmishes between the Seminoles and American troops after the Native American's resistance to leave the area and head to reservations. Tensions between the United States and the Seminoles began when the US acquired Florida from Spain in 1821. Three years later in 1824, under the Treaty of Moultrie Creek, the United States government decided to place Seminoles on a reservation. White settlers broke several elements of this treaty, including trespassing on public land in violation of the treaty as well as slave hunters trespassing on reservations looking for Black Seminoles without proof of ownership. Such actions led to the bloody Dade Massacre, when on December 28th, 1835, Seminoles attacked 107 US troops traveling the Fort King Road. All but three men were killed, including Major Francis L. Dade. The Massacre and the following Battle of Wahoo initiated the Second Seminole War. The site of the Dade Massacre would eventually be preserved as the Dade Battlefield Historic State Park. In 1973, Dade Battlefield was listed on the National Register of Historic Places, and in 1994, the National Park Service listed the park as a National Historic Landmark. Nowadays, the 80-acre Dade Battlefield Historic State Park offers hiking, playgrounds, and other amenities, including a Visitor Center 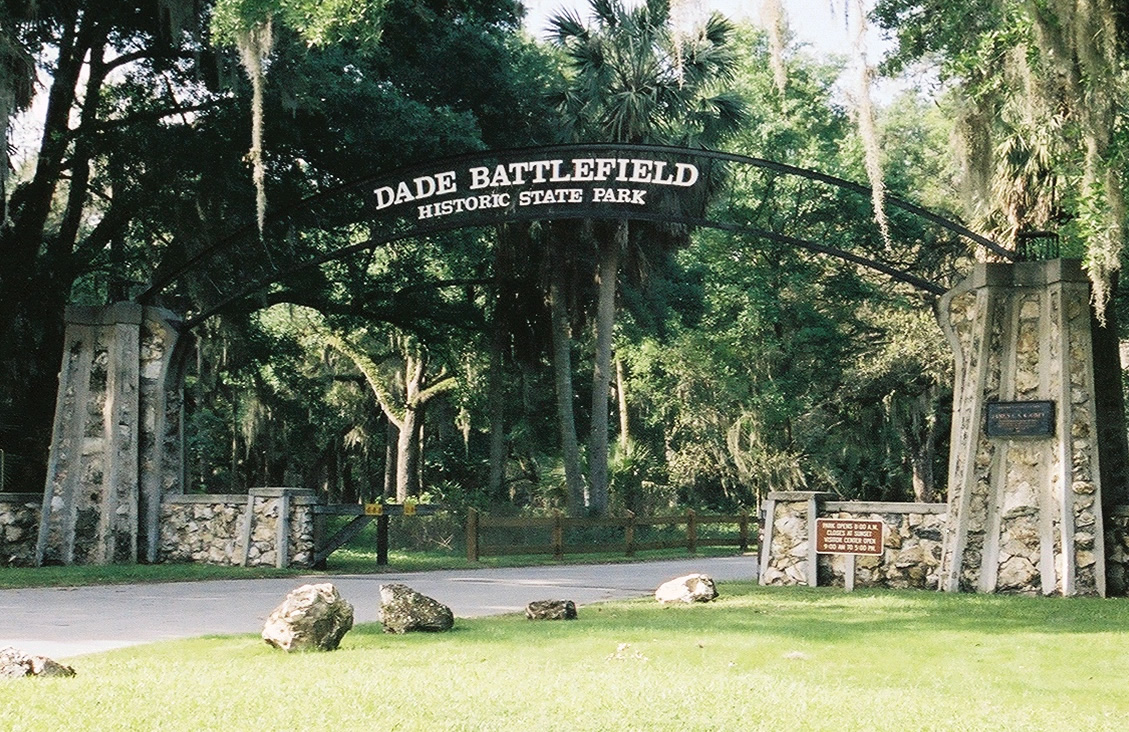 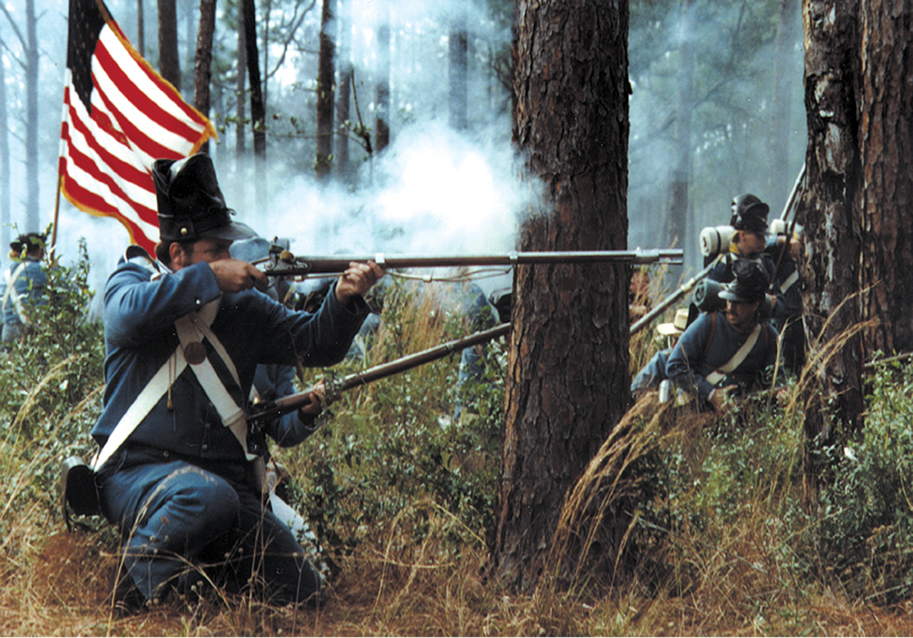 "Massacre of Major Dade and his Command" engraving (1847) 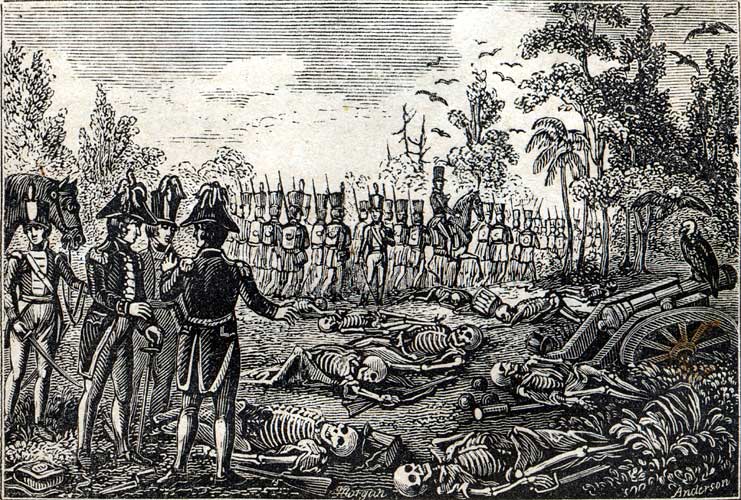 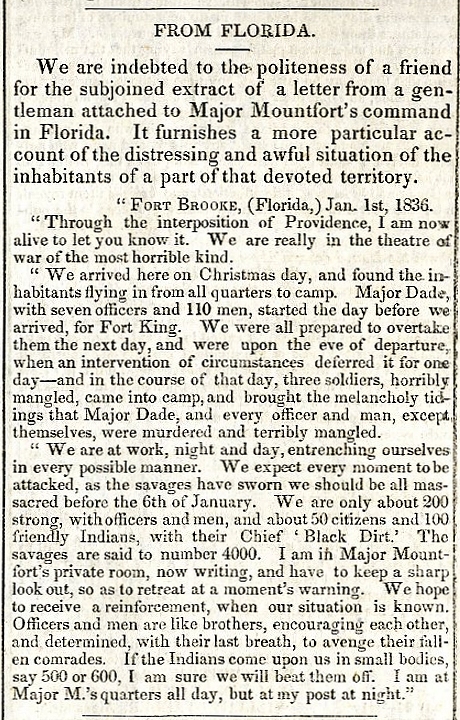 Detail from an 1836 engraving depicting events from the slave uprising during the Second Seminole War.

On the morning of December 28th, 1835, Major Francis L. Dade gave a speech to 107 of his cold, tired men, saying, “Have a good heart; our difficulties and dangers are over now, and as soon as we arrive at Fort King you'll have three days to rest and keep Christmas gaily.” Major Dade and his men were marching from Fort Brooke in Tampa to Fort King near modern-day Ocala.

The eventual tragedy that would overtake Dade and his men that day can be traced back to Andrew Jackson’s election to the US presidency in 1828 (though tensions between Florida tribes and settlers date back to Spanish colonization). Nevertheless, under Andrew Jackson American-Indian relations suffered greatly. First, there was Indian Removal Act of 1830, which proposed the removal of over 72,000 Indians who lived east of the Mississippi River. Although the Moultrie Creek Treaty of 1823 gave Florida Indians 20 years to emigrate, under orders by the US Government, a new treaty at Payne’s Landing in 1832 shortened this deadline to 1835.

“My children…The game has disappeared from your country," he wrote, "your people are poor and hungry…The tract you ceded will soon be surveyed and sold and immediately occupied by a white population…You have no right to stay…I have directed the commanding officer to remove you by force…Your friend A. Jackson.”

Throughout 1835, several small skirmishes erupted, furthering already disintegrating relations. Over several encounters, both militiamen and Native Americans dealt blows. Jackson and the US government remained over-confident of the Native Americans prowess in military matters. Jackson even claim that “he could take 50 women and whip every Indian that had ever crossed the Suwannee.” It was, in part, this overconfidence that led to Dade’s orders through potentially dangerous territory on December 28th, 1835.

The Dade Massacre and the Second Seminole War

On the first day of the march from Fort Brooke to Fort King, Dade and his men were joined by Captain George Gardiner as well as a slave, Louis Pacheco, who could speak four languages fluently. Due to his linguistic skills, Pacheco was sent ahead of Dade’s army to scout.

After a few days of marching, Dade and his army made camp about four miles above the Little Ouithlacoochee river. On the morning of December 28th, a Seminole camp not too far away from Dade’s camp was full of excitement. Warriors danced to keep warm; Seminole leader Halpatter Tustenuggee (also know as “Alligator”) later reported that they had been “preparing for this for more than a year.”

While the Seminole’s prepared, the unsuspecting Major Dade failed to deploy flanking guards as normal. Sometime between 8:00 am and 10:00 am (there are various accounts of the attack), about 180 Seminoles hiding behind palm trees and palmettos ambushed the US soldiers in a coordinated volley. Many of the officers, including Major Dade, and half of the soldiers were killed. A haphazard defense was quickly set up, but it proved to be ineffective. Over the course of several hours, the Seminoles killed every man except for three.

Louis Pacheco later gave an account of the events:

“About 10 o'clock, while I was with the advance guard, Captain Frazer and I turned aside to examine an old gray horse we found by the road, and finding it worthless, had returned to the road, and had nearly overtaken the advance guard, when I heard a single rifle shot, and I looked back to see if someone was shooting game, but just in time to see Major Dade fall just in front of me, shot in the breast. Although this was perfectly open country, and I had just looked carefully for Indians ahead, the country was now filled with large numbers of them on our left, coming for us with the war-whoop; I immediately threw down my gun and laid down behind a tree, very much frightened. As I could speak the Seminole language, I begged each one for my life, as they leveled their guns at me, and they were not a few, telling them I was a slave and was doing what I was bidden, etc. Finally Jumper, the chief in command, interfered and ordered as well as he then could, that I should not be shot, but even after this, one Indian was determined to kill me, but fortunately another Indian got his rifle ball stuck in his gun and ran, when the other Indians seeing this one run, became frightened, and all ran, when Jumper again took me and put me under guard. The same Indian, though, still assured me that when he came back he would kill me yet, but, luckily for me, he was shot by the whites. The battle lasted from about 10 o'clock in the morning until nearly sunset.”

The Second Seminole War took place with the Seminole Indians starting off strong at the beginning of the war by using surprise attacks and ambushing U.S. troops in the early years in the war. This was all thanks to the Seminole chief, Osceola. October, 1837 is when the tide of the war stated to change in the favor of the American soldiers. General Thomas Jesup captured the Osceola, heavily crippling the Seminole forces. After the significant amount of losses of the Seminole Indian warriors in the major battles at Lake Okeechobee and Loxachatchee River due to being outnumbered by U.S. troops, the war ceased in August 14, 1842 with thousands of Seminoles moving to Creek reservation in the west (Britannica). As stated before, the Dade’s Battlefield Historic State Park was the first battle in the Second Seminole War and was important to preserve the land to share the history behind the massacre.

Preservation and History of the Dade Massacre Site

A century after the massacre, in 1935, Lake County judge J.C.B. Koonce promoted the idea to celebrate the centennial with a ceremony. At first, the organizers planned a reenactment of the battle and invited Seminoles to join and formally sign a peace treaty with the US government. These plans eventually changed to include a picnic, a barbecue, and the full reenactment.

Today, visitors to the site can discover a museum on the site, a replica of breastworks, and a section of the Fort King Road, among many other amenities.

One of the more popular events at the Dade Battlefield Historic Memorial is the annual reenactment of the massacre, sponsored and conducted by the Dade Battlefield Society. During the Saturday and Sunday reenactments, visitors can listen to survivor Private Ransom Clarke’s narration of the events while volunteers act out the events of the massacre. After “Taps,” the reenactors speak with the public about the event and how it altered the course of Florida history.