Listed on the National Register of Historic Places, the Lawrenceville Female Seminary houses the Gwinnett County History Museum, which displays a variety of artifacts relating to and interpreting life in Gwinnett County. Run by Gwinnett County Parks and Recreation, the facility has exhibits on the second floor and features a meeting facility and rental space on the first floor.

The Lawrenceville Female Seminary was built in 1838 and today houses the Gwinnett History Museum. 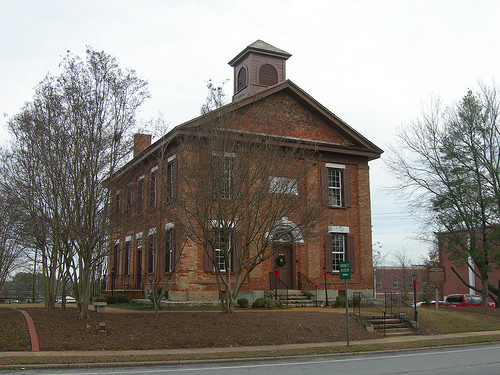 The town of Lawrenceville was incorporated in 1821.  By the late 1830’s, the leading citizens decided that it was necessary to build a school for the young women of the county. The Female Seminary was incorporated in 1837 by the Georgia General Assembly. A structure was built in 1838 by Daniel Killian.

The building was completed on July 31, 1838, and the doors first opened for classes on September 24, 1838. The original structure, however, was destroyed by fire sometime between October 1850 and July 1851. The structure standing today was built between 1853 and 1855 in conjunction with the newly founded Lawrenceville Masonic Lodge, No. 131, who met on the first floor while students went to classes on the second.

The last classes were held around 1888, after which the Female Seminary building was used over the next half-century as a "civic center" for the community. The building fell into disrepair and was almost sold to a Dairy Queen franchise in 1971. Lead by Mrs. Annette Williams Tucker, the community got the building listed on the National Register of Historic Places. It was bought by matching grants from the U.S. Department of Housing and Urban Development's Federal Open Air Grant and the Gwinnett County Board of Commissioners (total price for acquisition and restoration was $113,216). The building was restored as nearly as possible to its original appearance under the supervision of restoration architect Mrs. Gloria Kidd Brown.

Today, the facility has exhibits on the second floor and features a meeting facility and rental space on the first floor.