Located in Building 120 in the Historic District of the Veterans Affairs Medical Center, the Miami Valley Military History Museum honors the legacy of the men and women who have served in the armed forces. The exhibits are in chronological order, beginning with the Revolutionary War. From there visitors can view displays of the Spanish-American War, World War I and World War II, Korea, Vietnam and the Cold War, as well as Operations Desert Storm, Enduring Freedom, and Iraqi Freedom. Other military operations explored include Lebanon, Grenada, and Panama. The history of the National Home for Disabled Volunteer Soldiers is also on display.

Located in Building 120 in the Historic District of the Veterans Affairs Medical Center, the Miami Valley Military History Museum begins their collection with the Revolutionary War and continues with displays up to recent military operations. 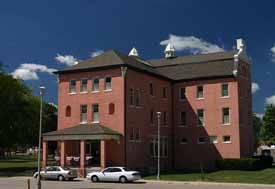 The Miami Valley Military History Museum was established for four reasons. The first was to continue and preserve the memory of the United States Armed Forces of the past, present, and future. The second was to establish a permanent military history museum to serve as a repository for military artifacts and research materials. Third, the museum aimed to emphasize the military history of the state of Ohio and its local communities. Finally, the museum wanted to promote patriotism and respect for both the Armed Forces and the veterans who served in them.

The Miami Valley Military History Museum represents all ranks and branches of the service. Visitors can see artifacts that belonged to privates and generals and there are also remnants from both sides of the conflicts.  The United States Navy donated a piece of the USS Arizona to be put on display at the museum. Visitors can also listen to actual World War II news broadcasts. At the Vietnam display, visitors can check out the Armed Forces Vietnam radio shows that were broadcast during the war. Visitors can even try on a flak jacket or Kevlar helmet.