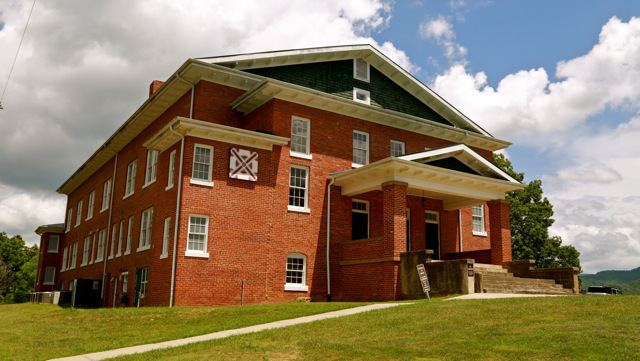 The Yancey Collegiate Institute, a Baptist-sponsored secondary education institution, opened in Burnsville, North Carolina in 1901. The campus was built on a prominent hillside, Baptist-Hill, which is located approximately one-quarter of a mile from the Burnsville town square. The first two student to enroll in the Yancey Collegiate Institute were James Hutchins and Joe Letterman. Hutchins and Letterman, were also the first two graduates of the school in 1906.

On 11 November, 1918, the main building burned to the ground. Despite the loss, classes continued to meet at the Bennett home. All of the school's record and the well equipped library were destroyed by the fire. A new structure was erected and commissioned for use the following year. The new main building contained twelve classrooms, two society halls, two music studios, a study hall, and a large auditorium. The new main building was also equipped with electricity and steam heat.

In 1922, the second main building partially burned and again destroyed the school's record, library, and furniture. The school rebuilt the structure using the foundation and the exterior walls. Despite increasing enrollment following the second fire, the school began to suffer from financial problems. Growing debt and an increase in the number of public high schools throughout the area forced the school to close. The Board of Trustees voted to close the school in 1925. Later that year, the Yancey County Board of Education purchased the property for $65,000, though the property was worth over $105,000. The school reopened as Burnsville High School for the 1925-1926 school year.

WPA funding was secured for the construction of a new high school in Burnsville. The new Burnsville High School was built across the street from the old Yancey Collegiate Institute. Construction of the new high school was completed in November 1939, and Burnsville Elementary School relocated from the old Brown Dormitory for Boys to the old Yancey Collegiate Institute main building. The old main building served as the location for Burnsville Elementary School until a new elementary school was built in 1991.