This historical marker was dedicated in 1971 by the West Virginia Department of Archives and History and is located on Buckeye Road near Mason Dixon Park. Prior to being a state road, this route was part of the network of trails in the eastern part of North America that was used by the Catawba tribe. The path was developed and used by the Catawba and other tribes and connected numerous villages and tribal networks through the Appalachian Valley. The trail runs from Greensboro, Pennsylvania to the Ohio River in West Virginia. A branch of the trial crosses the Mason-Dixon line and continues past where the marker is actually located. 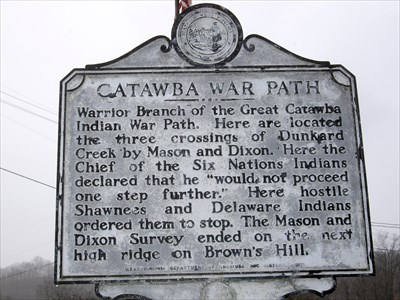 This trail is part of the Great Indian Warpath. The Indians first used the trail for trade exchange and raiding. The path was also used during the Revolutionary War. In the nineteenth century the trail became locally known as the Morgantown Road[2].

The Catawba are a federally recognized tribe of Native Americans, known as the Catawba Indian Nation. The Catawba live in the Southeast US, along the border of North Carolina. The Catawba were once considered one of the most powerful Southeastern tribes in the Carolina Piedmont. Primarily involved in agriculture, the Catawba were friendly toward early European colonist, mainly because they participated in trade. They were at almost constant war with tribes of other major language families, fighting for control over the Ohio Valley, including what is now West Virginia[1]. The Catawba allied during the Revolutionary War with the Patriot colonists against the British. The Catawba declined in population in the eighteenth and nineteenth centuries because of the small-pox epidemic, so they claimed their homeland to be South Carolina in 1840 by a treaty but it was not approved by the United States Senate[3].

In 1959, the tribe was "terminated" by the government. In 1973 began its struggle to gain federal recognition and accomplished this in 1993. They received a fifty million dollar settlement from the federal government and state of South Carolina of its longstanding land claims. It was also officially recognized by the state of North Carolina in 1993, with Its headquarters located in Rock Hill, South Carolina. Since year 2006, the population of the Catawba Nation has increased to about 2,600 people. The Catawba Reservation located in York County, South Carolina reported a 2010 census population of 841 inhabitants[3].