The Public Museum in Grand Rapids, Michigan was founded by a group of civic leaders in 1854 as the Grand Rapids Lyceum of Natural History and in 1868 merged with the Grand Rapids Scientific Club to form the Kent Scientific Institute and Museum. Over the next century, the Museum established itself as a premier educational institution in the area and continues in to fulfill this role for West Michigan today. Highlights of the museum include a planetarium, a 1928 Spillman Carousel and a 1928 Wurlitzer Organ. 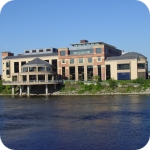 The museum features several permanent exhibits showcasing the history and culture of the city and Western Michigan. Permanent exhibits include Anishinabek: The People of This Place, which tells the story of the Native American tribe that inhabited this area; the Streets of Old Grand Rapids; Habitats of Western Michigan; and Newcomers: The People of This Place, which explores the ethnic history of the area.