If you’re traveling anywhere near the mountains of northeast Georgia, take a walk through the past at the Foxfire Museum & Heritage Center, a look at a unique time and place in America's past that is very nearly gone - a glimpse of a rich past captured by local high school students who truly valued their heritage. 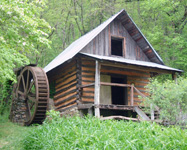 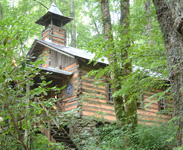 Here you will find homes, tools, trades, crafts, and a look at the lifestyle of the all-but-vanished pioneer culture of the Southern Appalachian mountains. Foxfire students began interviewing their families, friends, and neighbors in 1966. Many times, these folks would give the students some old tools or the finished hand-crafted items they were discussing or documenting. Very quickly, Foxfire was growing an extensive artifact collection. When The Foxfire Book became a national phenomenon, Foxfire gained a source of capital (book royalties) to fund new growth. In 1974, Foxfire students elected to purchase land on Black Rock Mountain and created a physical presence in the community. From the beginning, the students intended this property to be a place of interaction between themselves, their work, and their community.

Foxfire’s new homeplace opened up a whole new realm of possibilities for the students – they could now collect and preserve a very significant piece of endangered Southern Appalachian culture that they had never been able to even consider before – the log cabins that were home to so many generations of their ancestors. About half of the 20+ log cabins at the Museum are authentic structures, standing nearly as they were originally built as many as 180 years ago. The rest of the cabins are traditional designs, constructed from usable pieces of barns, homes or other buildings too deteriorated to be reassembled, and represent structures that could not be found intact or would not be parted with by their owners.