The Indian Trail Caverns are an exceptional cave formation located in a natural limestone-dolomite ridge that runs along Ohio Route 52 which crosses through historic Wyandot, Seneca and Hancock counties. The caverns are a fun way to explore what the region was like in the past. Tours following stairways are available at the cavern making a suitable experience for all ages.

The Indian Trail Caverns are an exceptional cave formation located in a natural limestone-dolomite ridge. The caverns are a fun way to explore what the region was like in the past. 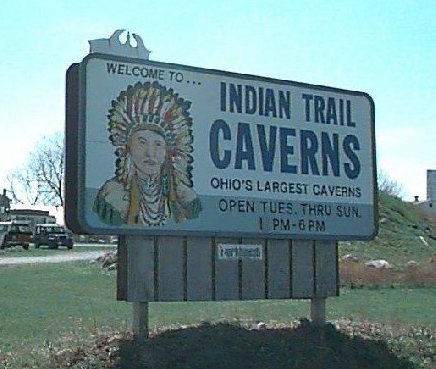 The Indian Trail Caverns and Sheridan Cave research site is a wonderful location in the United States for anyone who wants to research the past.  Top specialists from all over the world come to the caverns and cave to do research.  The site has also been filmed for movies and documentaries such as “What Killed the Mega Beast, which was on the Discovery Channel in 2002, “Ancient Asteroids” on National Geographic television and “The Universe” series on the History Channel in 2009.

Over ten thousand different specimens and artifacts including over sixty-five different species that lived in Ohio before the last glacial coverage of the area have been found in the cave.  Short faced bear, elk-moose, flat headed and long nosed peccary are some of the rare extinct species that have been found at the site.  It is also the most recent site on the entire planet where the giant beaver existed.  This giant beave measured over six feet long and weighed more than 250 pounds.

In August 2001 the State of Ohio presented the Sheriden Cave Site at Indian Trial Caverns with a historical marker.