Francis Gary Powers – often referred to as simply Gary Powers – was an American pilot whose Central Intelligence Agency U-2 spy plane was shot down while flying a reconnaissance mission over Soviet Union airspace on May 1, 1960. He was then held as a prisoner and exchanged for a Soviet spy in 1962. He later died in a helicopter crash in 1977 and is buried in Arlington cemetery. 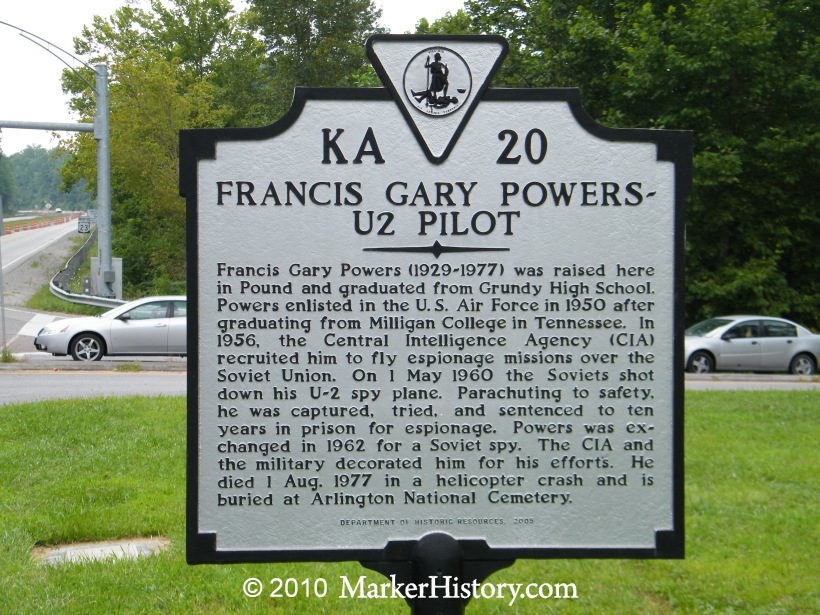 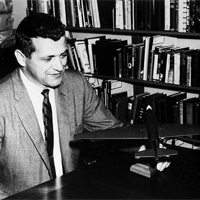 Francis Gary Powers (1929-1977) was raised in Pound, Virginia and graduated from Grundy High School. Powers enlisted in the U.S. Air Force in 1950 after graduating from Milligan College in Tennessee. In 1956, the Central Intelligence Agency (CIA) recruited him to fly espionage missions over the Soviet Union. On 1 May 1960 the Soviets shot down his U-2 spy plane. Parachuting to safety, he was captured, tried, and sentenced to ten years in prison for espionage. Powers was exchanged in 1962 for a Soviet spy. The CIA and the military decorated him for his efforts. He died 1 Aug, 1977 in a helicopter crash and is buried in Arlington National Cemetery.

Francis Gary Powers wore a special pressure suit for stratospheric flying, and lens of aero photo cameras were installed in the aircraft. These were found at the exhibition of remains of the spy aircraft in 1960. Powers was discharged from the Air Force in 1956 with the rank of captain. He then joined the CIA's U-2 program at the civilian grade of GS-12. U-2 pilots flew espionage missions using an aircraft that could reach altitudes above 70,000 feet, making it invulnerable to Soviet anti-aircraft weapons of the time. The U-2 was equipped with a state-of-the-art camera designed to take high-resolution photos from the edge of the stratosphere over hostile countries, including the Soviet Union. U-2 missions systematically photographed military installations and other important sites.

Soviet intelligence, especially the KGB, had been aware of U-2 missions since 1956, but they lacked effective counter-measures until 1960. Powers’ U-2, which departed from a military airbase in Peshawar, Pakistan and may have received support from the US Air Station at Badaber (Peshawar Air Station), was shot down by an S-75 Dvina (SA-2 Surface to Air) missile on May 1, 1960, over Sverdlovsk. Mayak, the site of the 1957 Kyshtym disaster, was a goal of this mission. Powers was unable to activate the plane's self-destruct mechanism before he parachuted to the ground and was captured. On August 17, 1960, Powers was convicted of espionage against the Soviet Union and was sentenced to a total of ten years, three years in imprisonment followed by seven years of hard labor. He was held in Vladimir Central Prison, 100 miles east of Moscow. The prison contains a small museum with an exhibit on Powers, who allegedly developed a good rapport with Russian prisoners there. Some pieces of the plane and Gary Powers' uniform are on display at the Monino Airbase museum, close to Moscow.

On February 10, 1962, Powers was exchanged, along with American student Frederic Pryor, in a well-publicized spy swap at the Glienicke Bridge in Berlin, Germany. The exchange was for Soviet KGB Colonel Vilyam Fisher (aka Rudolf Abel), who had been caught by the FBI and jailed for espionage.After being debriefed extensively by the CIA, Lockheed, and the Air Force, on March 6, 1962, Powers appeared before a Senate Armed Services Select Committee hearing chaired by Senator Richard Russell and including Senators Prescott Bush and Barry Goldwater Sr. It was determined that Powers had followed orders, had not divulged any critical information to the Soviets, and had conducted himself “as a fine young man under dangerous circumstances."