Fort Gadsden Historic Site, located in Franklin County on the Apalachicola River, is a National Historic Landmark and listed on the National Register of Historic Places. The site contains the ruins of two forts, and throughout different times in history, it has been known by different names. One of the most historically important aspects of Fort Gadsden involves the occupation of the Fort by 80 to 100 Black soldiers in 1814, comprised of mostly freed citizens living in the Spanish Florida territory. The United States territory at the time reached the southern end of Georgia, and plantation owners and others were intimidated by the African-American led fort, claiming that it served as a beacon of sorts for runaway slaves. In 1816, 112 soldiers from the U.S. 4th Infantry attacked the Fort, and with a single cannon fire, which landed in the Fort’s gunpowder magazine, 270 men, women, and children and the Fort were killed. Nowadays, Fort Gadsden is a scenic and educational site for visitors, and it’s full of kiosks and other signage detailing the historic events that occurred throughout the site as well as a comprehensive history of the forts that once stood on the site. At the site’s cemetery, visitors can find the burial grounds of those killed in the bloody “Battle of Negro Fort.”

"Warriors from Bondage," by Jackson Walker 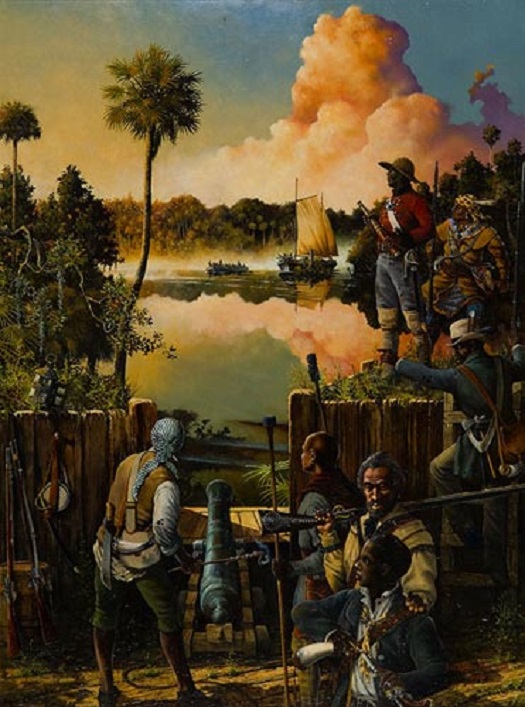 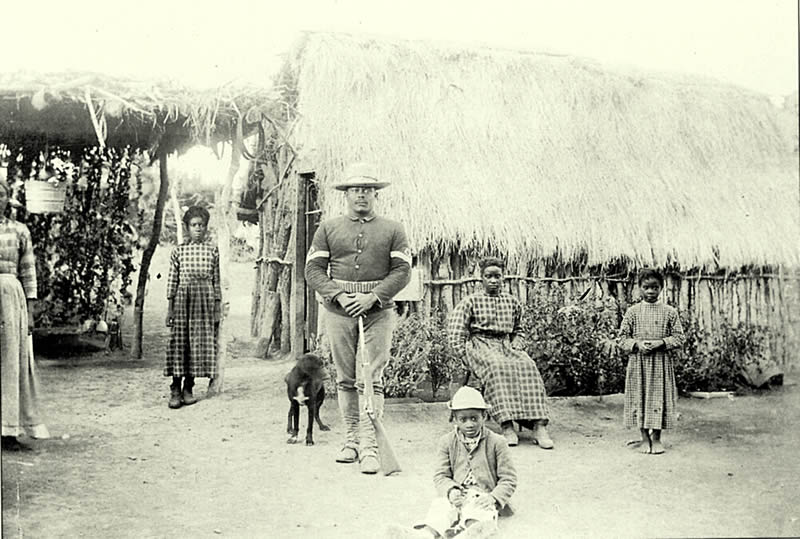 Painting of the magazine explosion at the Fort 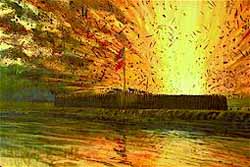 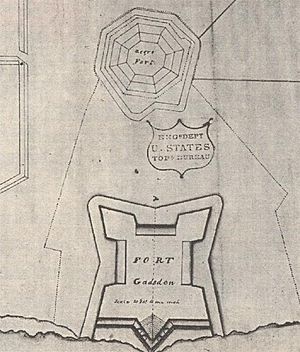 A soldier in the "Corps of Colonial Marines," a regiment of free citizens of Florida and ex-slaves who fought alongside the British in the War of 1812. 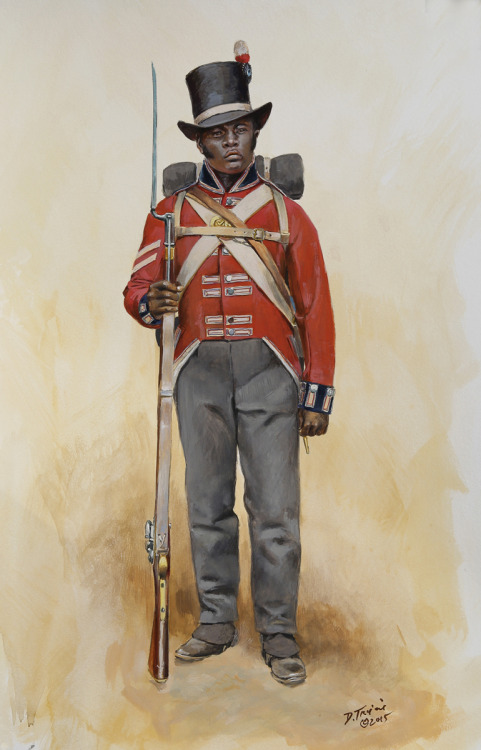 The earliest fort on the Fort Gadsden Historic Site was built during the final year of the War of 1812. The quick construction of the fort came from the British’s desire to open a southern front against the United States and enact a prompt invasion of the Gulf Coast. British Captain George Woodbine arrived at the mouth of the Apalachicola River in 1814, under orders of opening contact with and providing arms and ammunition to the thousands of Red Stick warriors who had fled to Florida due to their losses in the Creek War of 1813-1814. About 30 miles up the Apalachicola River, at Prospect Bluff, Woodbine collaborated with the British-owned Forbes & Company trading post to distribute military supplies to the allied Red Sticks and Seminoles.

Following the establishment of the post at Prospect Bluff, British Major Edward Nicolls began supervising the construction of a fortification, and once completed, the Fort held over a fighting force of over 2,000 Red Stick, Seminole, and Choctaw warriors. Woodbine, Nicolls, and other British officers also assembled a fighting force comprised of 100 African American soldiers, most of whom were free Black citizens of Florida, though some had been slaves American plantations. After the end of the War of 1812, the British remained at the Fort until May 1815, at which point the British turned the Fort, a cannon, and a large supply of small arms over to its allies. Former slave and Sergeant Major Garcon was instructed to defend the post against any attacks.1

The Battle of Negro Fort

Once the British had left, many of the Red Stick, Seminole, and Choctaw warriors returned to their villages. However, Garcon and a force of 100 Black soldiers continued to defend the Fort and live there with their families. Soon, the Fort became the focal point of a settlement of free Blacks, which caused significant concern for plantation owners in the South, as well as the American government. Consequently, the U.S. that Spain deal with the situation. The Spanish Governor of Pensacola seemed willing, but internal bureaucracy on Spain's part delayed any action.

Frustrated by the delay, the American government authorized Major General Edmund P. Gaines to take care of the Fort. The operation was led by Lieutenant Colonel Duncan L. Clinch, and in July 1816, 112 soldiers from the 4th U.S. Infantry and a regiment of several hundred Creek warriors marched down the Apalachicola River, eventually surrounding what they called, “Negro Fort.” Clinch demanded surrender, but Garcon refused and responded with a shot from one of the Fort’s heavier cannons. Garcon had his men raise the English Jack flag as well as a red (“bloody”) flag.

On July 27th, 1816, the Battle of Negro Fort began. Clinch boasted support of the U.S. Navy, and Gunboats #149 and #154 were moved in of the Fort. On Gunboat #154, the sailors loaded a cannonball that had been heated so that it glowed red. The cannon was fired; the ball flew over the Fort’s high walls and broke through the entrance of the gunpowder magazine. What ensued was a massive explosion, and in an instant, the Fort was reduced to ruins and an estimated 270 (out of the 320 or so) men, women, and children were killed. Garcon and a Choctaw Chief were among the survivors, though, like other survivors, they were taken prisoner. The U.S. Infantry handed the prisoners over to the Creeks, who shot Garcon and scalped the Chief.

The result of the short battle influenced Florida warfare over much of the 19th century. Seminoles anger at the U.S. the Fort’s destruction would contribute to the Seminole Wars, which broke out a year later. Creek participation in the attack would increase tension between them and the Seminole tribes.2

Following the Battle of Negro Fort, General Andrew Jackson directed James Gadsden to rebuild the Fort in 1818. The Fort was a forward base for army movements during the First Seminole Wars, as well as the Second Seminole Wars. During the Civil War, Fort Gadsden was under Confederate control until 1863, as it was abandoned due to a malaria outbreak.

For the next years, the Fort stagnated without any purpose, slowly devolving into a forgotten history. This changed, however, in the 1960s when the Florida Board of Parks & Historic Memorials established the Fort Gadsden Historic Site. After clearing forest growth and constructing picnic areas and other amenities, Florida gave the Site to the Federal Government. The U.S. Forest Service stepped in to care for the site, which is now a National Historic Landmark and listed on the National Register of Historic Places.

Nowadays, visitors can explore the earthwork remains of the Fort, as well as traces of “Negro Fort,” a cemetery, interpretive signage, a mini-museum, and a network of hiking trails and other amenities.3