The Buffalo Creek Disaster occurred on February 26th, 1972. This disaster happened when a dam busted and released millions of gallons of waste from a hillside in Man, West Virginia. The disaster occurred despite inspectors mistaking the dam for being "satisfactory" three days before it broke. The survivors of Buffalo Creek were treated very poorly during this time, shockingly. They were promised a numerous amount of things and received nothing but about 13,000 dollars. The survivors worked extremely hard at making their town whole again and grieving their loved ones.

Buffalo Creek homes prior to disaster.

View from the site of the dam which broke, causing the flood.

Buffalo Creek during the flood. 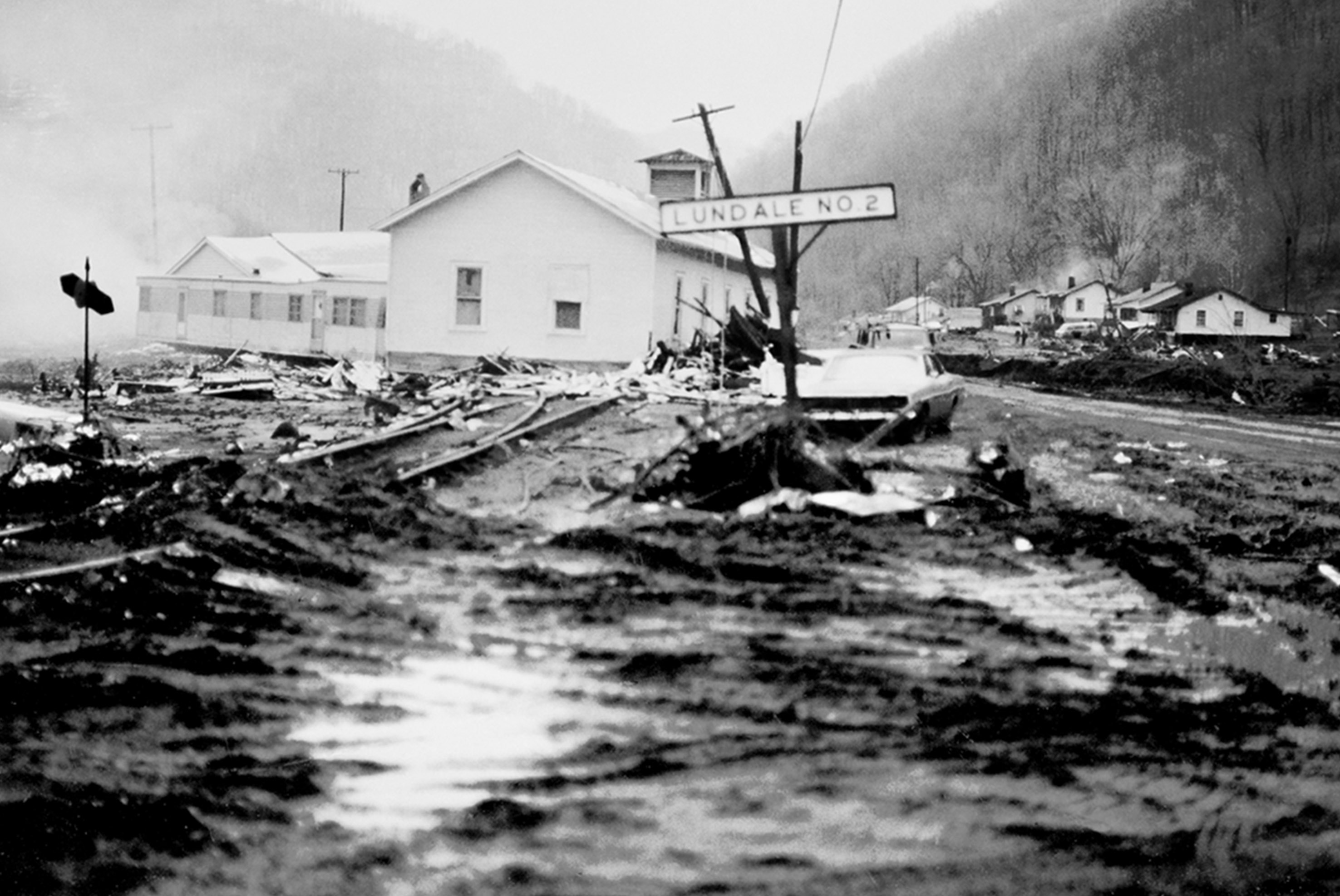 This is where the dams are located. 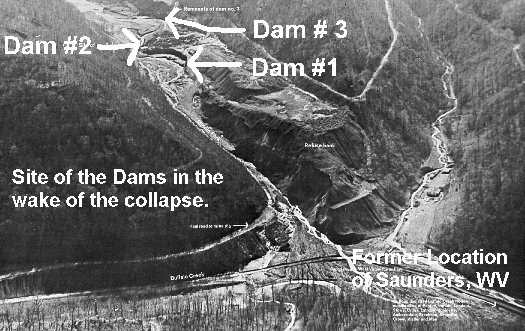 Damage from the flood. 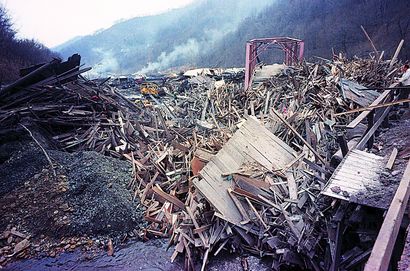 What flooded the valley. It wasn't just water. It was debris, slurry, mud, and water. 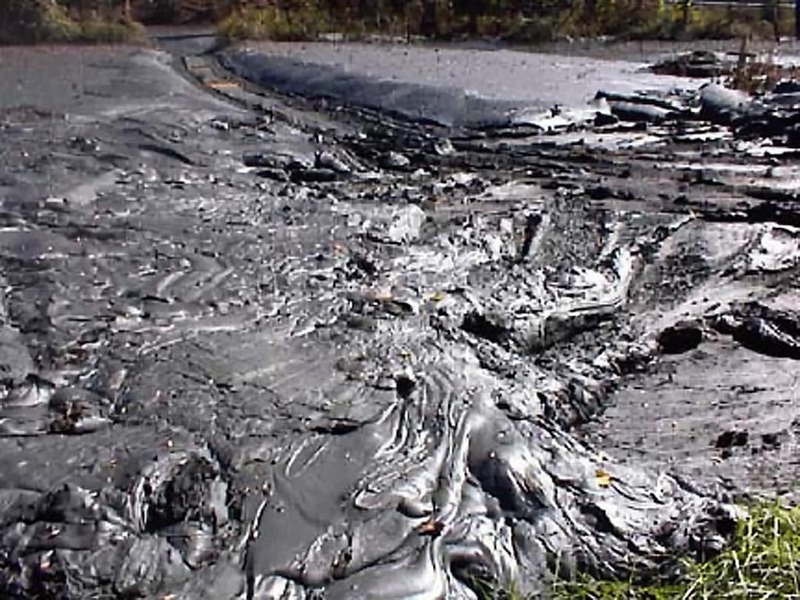 House prior to the flood. 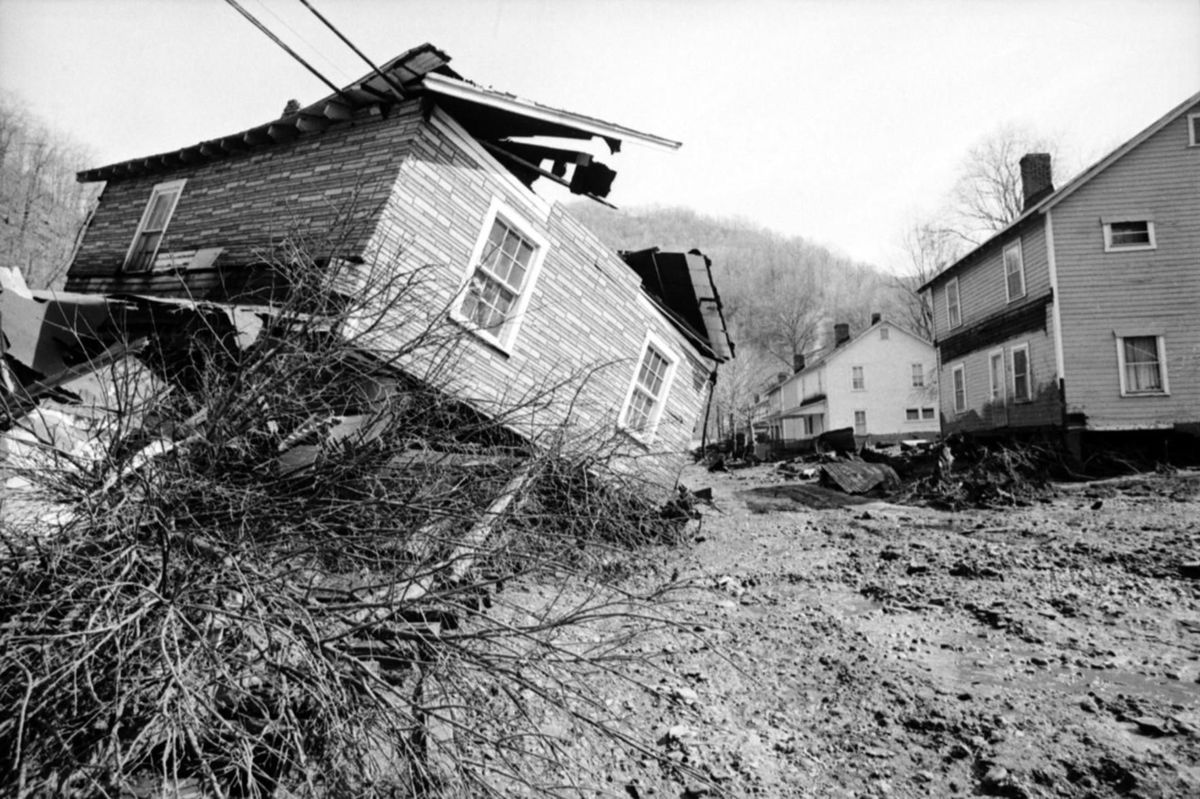 People after the flood. It destroyed railroad tracks also, as you can see. 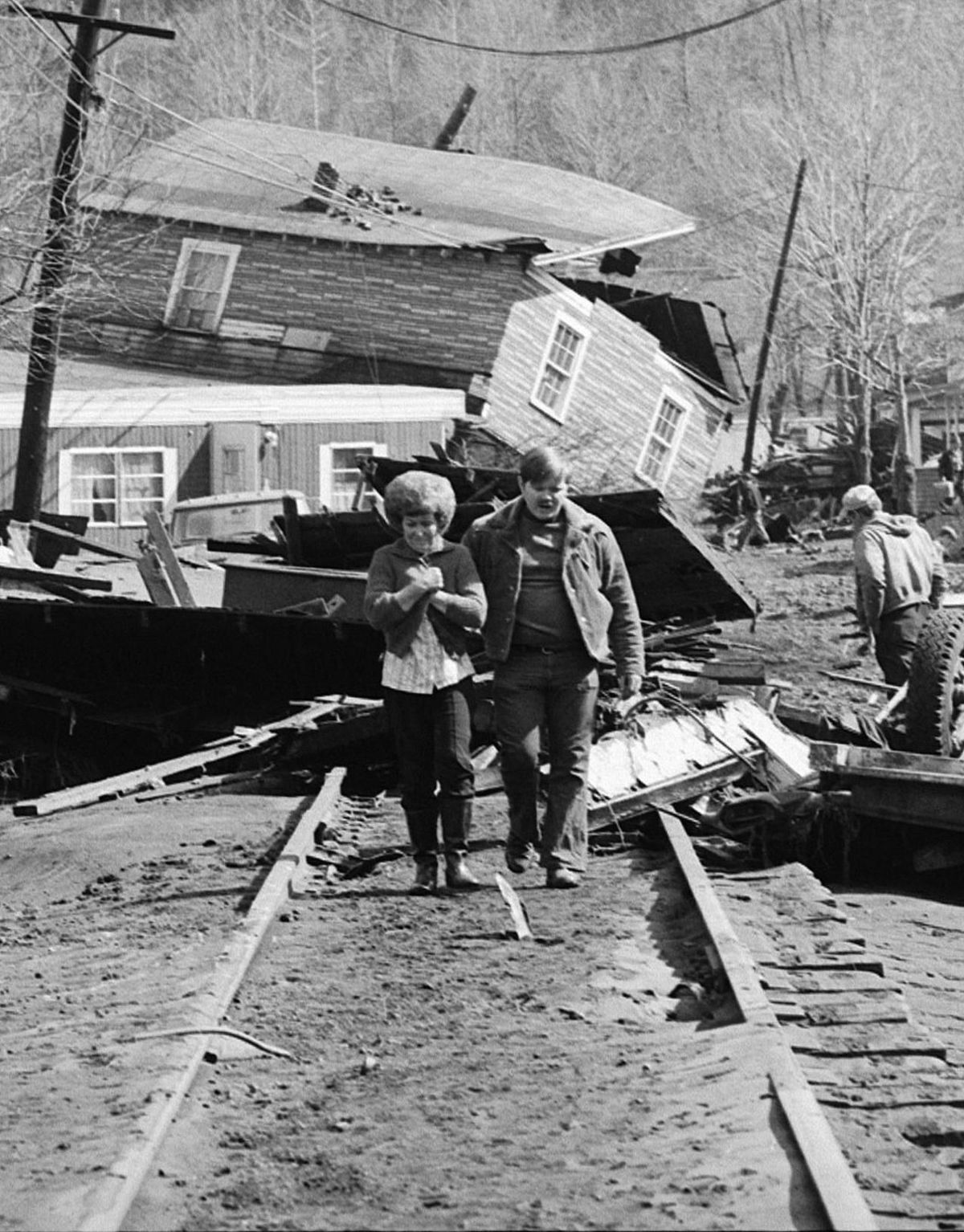 Houses prior to the flood. 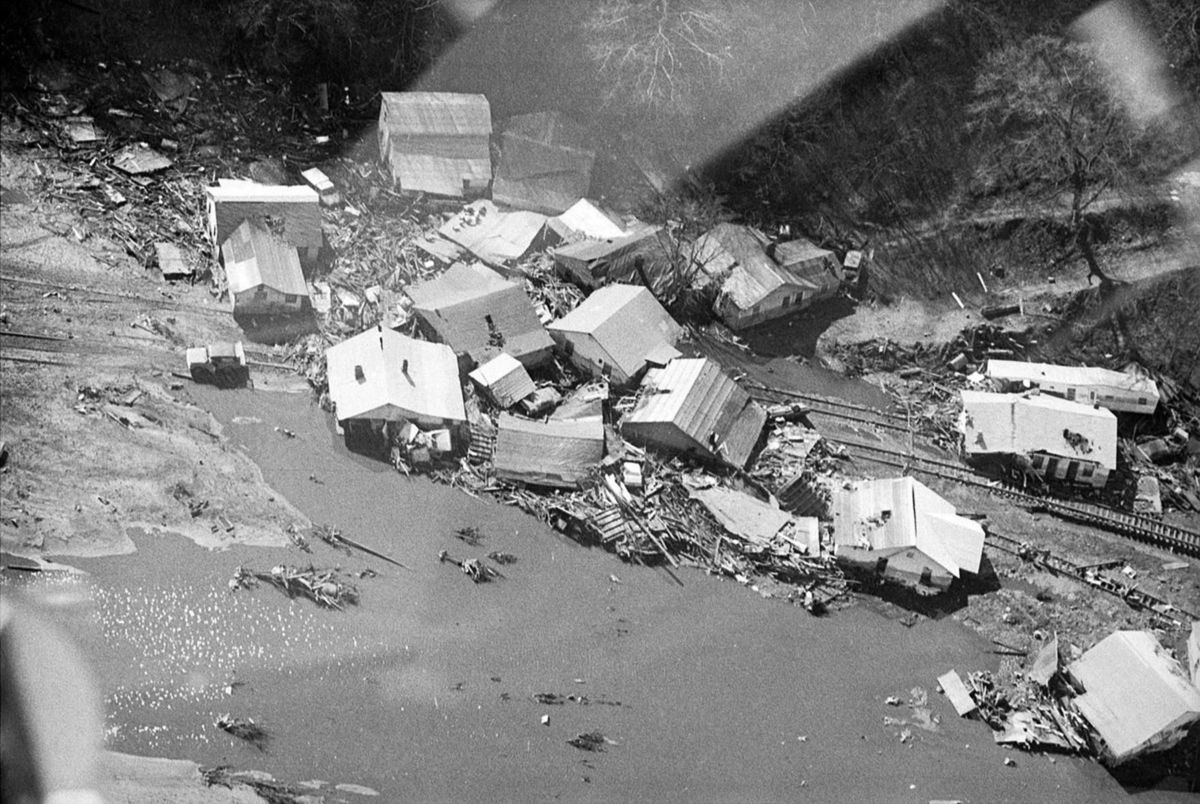 It had been raining for many days when, at 8:00 AM on Feburary 26th, 1976, employees at Buffalo Creek noticed that the top embankment was worryingly soaked with water.  At 8:05 AM, the embankment broke.  Men worked for a few minutes to try and stop what was going on, but that did not work.  A huge tsunami rushed down the valley destroying railroad tracks, creek banks, roads, and unleashing a deluge of 125 million gallons of coal slurry, debris, and waste upon the Buffalo Creek.  The water, debris, and slurry flowed through about fifteen coal towns set up by the Pittson Coal Company.  They had just approved the dam three days before this disaster occurred, saying it was fine, when in reality, it was not.  The flood destroyed everything in its path along Buffalo Creek.  Citizens were going to church, having a Sunday breakfast, sleeping, and/or spending time with their families when the dam busted and ruined many lives.  This disaster killed 123 people, injured about 1,000, and left 4,000 people homeless.

After the disaster, the Pittson Coal Company blamed the failure of the Three Forks Dam on the inclement weather.  They said it was just an “act of God.”  The Pittson Coal Company continued to use this rather not true phrase through the whole investigation, making it look like their hands were clean.  The disaster was investigated by many people in groups, the most significant being a joint group of the U.S. Bureau of Mines/Geological Survey team.  However, the Pittson Coal Company eventually just got away with it and no one was blamed.  People also say that if the people would have been warned properly, that they could have eventually made it to safety, and not as many lives would have been lost.

The Commission soon called for indictments of officials involved, but no indictments were returned.  Governor Moore promised many accommodations for the citizens who survived, proposing 10 new projects for the battered Buffalo Creek.  Ultimately, Buffalo Creek, no matter how hard the people of the state tried, was never the same.  As a matter of fact, they rearranged the creek and hollars also.  The surviving residents of Buffalo Creek engaged in a class action suit against Pittson Coal, seeking 64 million dollars in damages for their homes.  That also tied in for the pain and suffering the survivors had to go through.  Incidentally, all survivors were given 13,000 by the government, which was not much for what they had been put through.

Since the flood, the majority of the former Buffalo Creek have tried to keep up their community.  The citizens of Buffalo Creek were shockingly treated poorly during this difficult time.  As a result, the governor, in 1972 promised the survivors of this tragedy a community center, which was never given to them.  In 1971, families were falling apart, people were moving, and people were trying to fight this madness.  Consequently, it did not exactly go in their favor.  Many live in other places now, but reunions still happen.  The Buffalo Creek community served as a study subject for many wishing to study community.  They made it out to be like they never wanted it to happen again, and so far, it has not, but the citizen on Buffalo Creek want the coal companies to learn their lesson as well as the people who agreed with them.

However, an extremely interesting story came about out of this horrendous disaster.  During the flood, there was a mother and her son seeking shelter.  As the mother was holding her baby, she threw her son to where the flood waters were not going.  The flood waters were only in the valley, not much on the hills, so she threw him in the hills.  After the flood, her baby was found on the hill face-down in the dirt.  It turns out, the mother threw him because the water was about to get to her.  With that being said, the mother did not live, she drowned.  In memory of the "Miracle Baby", a mural was painted in honor of him.  He now lives in New York and is healthy.

Living in a small town, I myself know many people (including family members) that were in this horrific disaster.  I received the privilege of interviewing a couple people about the experience of this tragedy.  Some said they were absolutely speechless after this happened.  Some lost many family members, friends, and classmates during this time, and it was extremely hard for them to speak of this experience.  They had hardly any warning of this happening.  Some were asleep, some were getting up for church, some were eating breakfast, and it is devastating that some were never able to wake up.