Corcoran State Prison opened in 1988 and was intended to hold just over three thousand inmates. Like many state prions, Cocoran is overcrowded, with an estimated population of 4500 inmates in 2015. Among these inmates is the most infamous serial killer of the late 20th century, Charles Manson.

This is an overview picture of the Corcoran State Prison that Manson is located at. 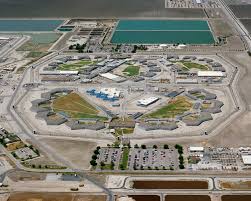 On November 12, 1934 in Cincinnati, Ohio, a boy was born without a name to an unmarried sixteen year old named Kathleen Maddox. After a few weeks, Maddox settled on the name Charles Milles Maddox. After she married, the child's name was changed to Manson. It is believed that Charles Manson never met his biological father and that his mother was an alcoholic.

In 1939., Charles Mansion was placed one of his aunt and uncle's house because his mother and her brother were arrested for robbing a service station in Charleston, West Virginia. When his mother received probation in 1942, the family was reunited but still lived a rough existence. In 1947, Manson's mother attempted to put Charles into a foster home and then placed him in a school for boys. After ten months, Manson escaped and went to look for his mother. However, his mother refused to allow Manson to live with her, so the boy was on his own.

Manson soon began a life of theft, which led to his placement in several correctional schools for boys. In 1955, Mansion stole a car and left the state with his pregnant wife, Rosalie Jean Willis, but was caught and arrested in Los Angeles. Manson was sentenced to three years imprisonment at Terminal Island in San Pedro, California. While in prison, his son Charles Manson Jr. was born. However, Manson's wife left him shortly thereafter. After a failed escape, Manson's sentence was extended by five years.

In 1959, Charles Manson was given a ten years suspended sentence and probation after a young woman named Leona met Mansion and pled for his release, promising to marry and reform Manson. In 1960, Manson was again arrested for a parole violation. Wife Leona secured a divorce three years later. In 1966 he was sent back to Terminal Island in order to prepare for early release. He was released on March 21, 1967 despite a request that he be allowed to simply stay in prison. By the age of thirty two Charles Manson had spent more than half of his life in correctional facilities, institutions, or prisons.

Released from prison, Manson began to recruit followers in what would become a cult-like group known as "The Manson Family. At some time in 1967, Manson met Dennis Wilson of the Beach Boys when Wilson gave two Manson followers a ride and then allowed them to use his home. Manson and his followers lived at Wilson’s residence for a short time before asking them to leave. Prior to their falling out, Wilson paid for studio time for Manson because he considered him a good singer and songwriter.

When Manson and the Family were kicked out of Wilson’s residence by his manager in 1968 they relocated to Spahn’s Movie Ranch. Then, in the later months of 1968 the Family moved to Death Valley. To prepare for the Helter Skelter that Manson strongly believed in, they Family moved to a home in Canoga Park in 1969. The Helter Skelter was a racial apocalypse that Manson believed was going to happen, he named it after a Beatles song. When this apocalypse did occur the Family was to hide in “the bottomless pit” which was a secret city beneath Death Valley. Manson and his followers decided to make an album to subtly trigger the predicted chaos, and Terry Melcher was supposed to come hear their progress on the album, he never showed.

On March 23, 1969 Charles Manson went to go visit Melcher to see why he never showed, but he no longer lived in the same residence. It was now occupied by Sharon Tate and her husband Roman Polanski. Mansons start of his many murders began with Bernard “Lotsapoppa” Crowe on July 1, 1969 for threatening the Family. Then, on July 25 Family members killed Gary Hinman for not giving them the money that Manson wanted from him. They attempted to frame another group for the murder, but were later caught when a family member was found driving Hinman’s car with the murder weapon in the tire well. Manson then told the family two days later “now is the time for Helter Skelter”. On August 8 Manson told some Family members to go to the Tate house and “kill everyone as gruesome as you can”. It was then after midnight making it August 9 when the Family members arrived at the house. They ended up killing a student named Steven Parent because he was trying to leave the residence right when they arrived. Then they went inside to accomplish what they had sent there to do and brutally murdered the four people in the house including Sharon Tate who was eight and a half months pregnant, Jay Sebring, Wojciech Frykowski, and Abigail Folger. Then, on August 10, ten family members and Manson committed the LaBianca  murders which included Mr. and Mrs. LaBianca. He was then sentenced to nine concurrent life imprisonments at Corcoran State Prison.