This 933 acre historic site of the LDS church was the scene of a dangerous 1856 winter that trapped close to 500 Mormon Pioneers that left late in the season towards the Salt Lake Valley. Suffering from hunger, fatigue and increasingly worsening weather, these pioneers were stuck and barely surviving until rescued during November and December of the same year. Between 145-177 people died. This site contains Martin's Cove, Devil's Gate, Prairie Park and Homestead Site, Rattlesnake Pass, Fort Seminoe and the Willie Center (named after the main Mormon Handcart company trapped in the Cove, Willie Handcart Co.) The site and grounds, with hiking available, are open to the public to learn more about the Mormon Trail, what happened in the Cove and strength and sufferings of the Mormon church having trekked from Nauvoo, Illinois to the Salt Lake Valley to be from persecution.

Monument erected in 1933 in honor of the pioneers that died here. 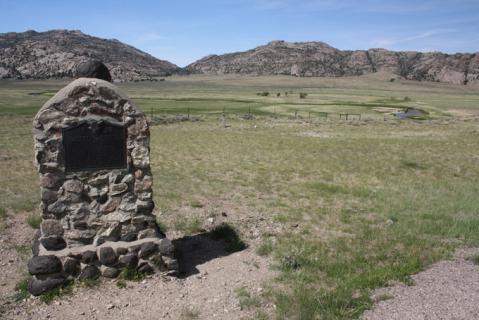 People taking part in a trek in portion of the site, trying to reenact how Mormon Pioneers traveled over 1000 miles west 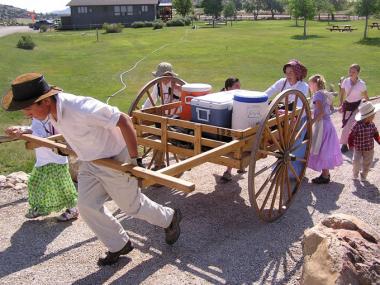 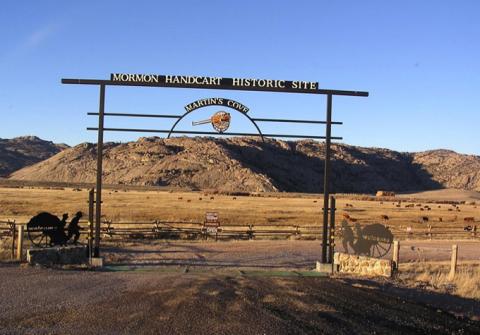 Painting of the Martin's Cove area 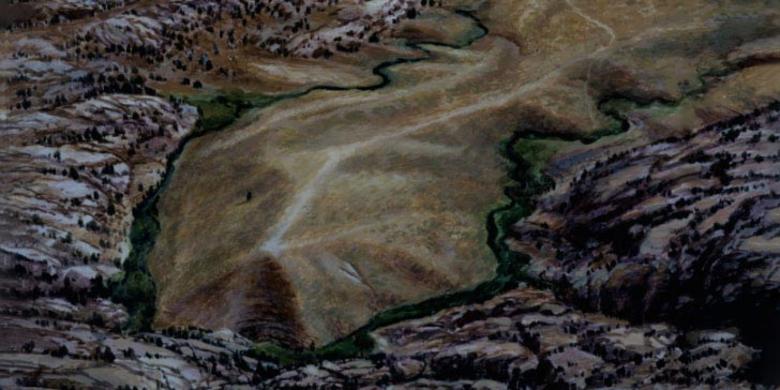 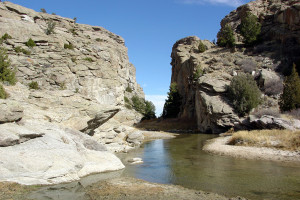 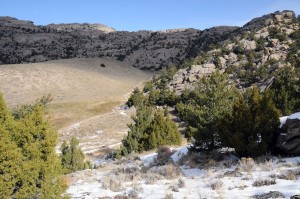 Painting depicting the suffering the pioneers in the area. 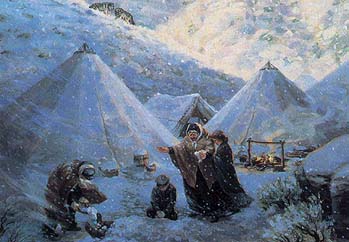 One of four men sent out to find the trapped pioneers so that rescue wagons can get to them. 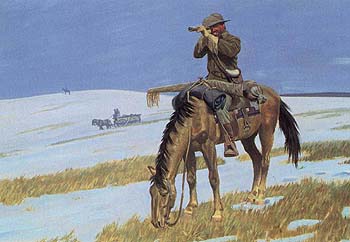 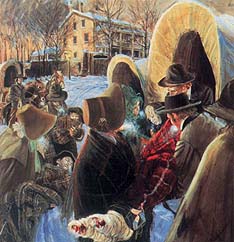 Replica handcarts for tourists with Devil's Gate in background 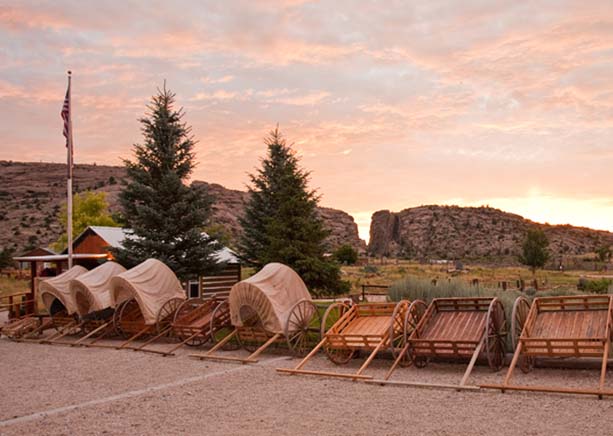 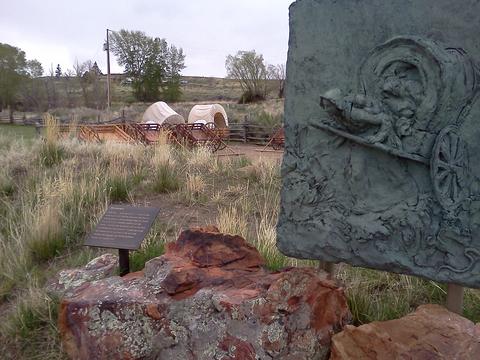 Rocky Ridge section of site. Same path the Mormon Pioneers had to pull the handcarts over 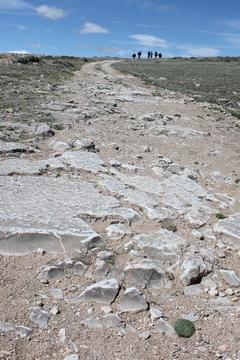 One of the various statues erected to honor the men of the rescue party. 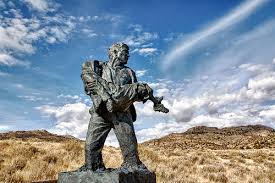 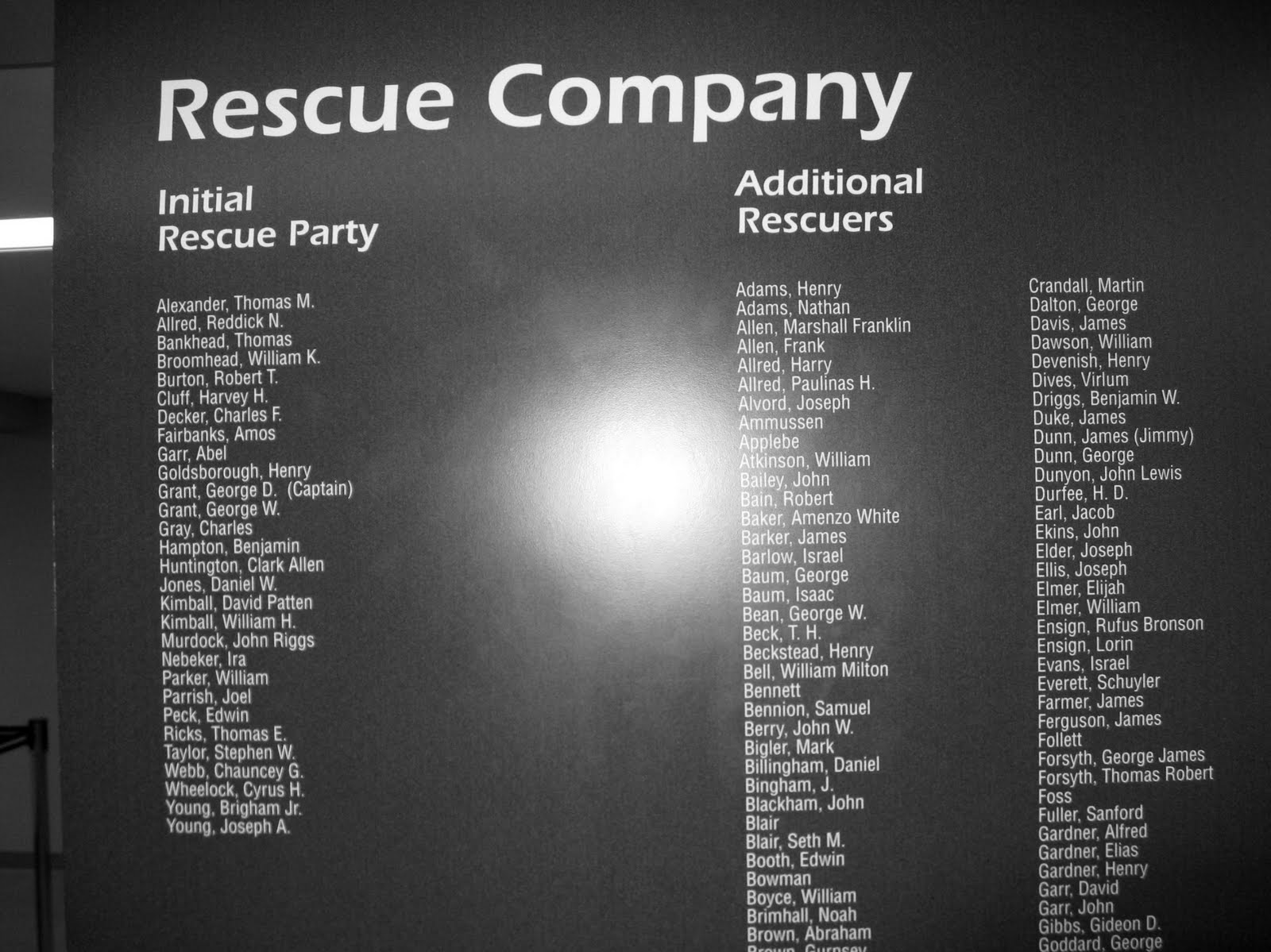 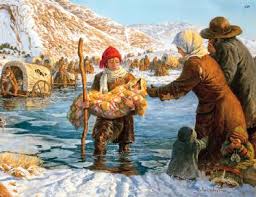 Although the two companies that left before reached Salt Lake City without incident, Willie and Martin companies left later in the season and suffered tremendous hardships. Jens Neilson, a member of the Willie Handcart Company explained that 'No person can describe it, nor could it be comprehended or understood by any human living in this life, but those who were called to pass through it.'2

Leaving so late in the season put the companies at a considerable disadvantage. On October 1 the Willie company arrived at Fort Laramie, but supplies they had hoped for to be left by Franklin D. Richards were not there. They had also suffered a serious loss of a number of oxen which they were unable to replenish there.3 Hunger, fatigue, and worsening weather conditions each contributed to the grave situation the Saints found themselves in. Upon reaching Salt Lake City on October 4, President Richards alerted Brigham Young to the companies’ situation. A rescue party was organized and left three days later to give relief and aid. However, they would not reach the Willie company for three weeks.

To make matters worse, while at Deer Creek, members of the Martin company made an unfortunate mistake. To lighten the loads which they were forced to pull, the allowed weight for each handcart was reduced and blankets and other clothing was burned or discarded. Then on Sunday, October 19, a severe winter storm passed through the region bringing the situation of the handcart companies to the breaking point. The Martin company had just crossed the Platte River, and hypothermia took many victims. When the advance party had reached them, 56 had already perished and many more would lose their lives.4

After passing through Devil’s Gate, the Martin company was forced to cross the Sweetwater River where four young men who were members of the rescue party carried people across the ice cold river. Afterwards they settled into Martin’s Cove to find shelter from the wind. However, several individuals died from exposure in the cove as well. The rest of the rescue party reached them and the finally came into the Salt Lake Valley between November 30 and December 15. In total, 177 individuals lost their lives from the Willie and Martin handcart companies.5 Though they passed through tremendous difficulty, those that survived were ever true and faithful to the gospel. One man who traveled in the Martin Compnay described that ' we came through with the absolute knowledge that God lives for we became acquainted with him in our extremities.'6"

Several of the rescuers were teenage boys that helped women, the lame and children cross the nearby Sweetwater River by carrying them across and returning to help more people. Many of the boys died form exposure or lost limbs for their sacrifice.

Following the LDS Church's purchase of nearby Sun Ranch in the 1990s it tried to purchase the Martin's Cove property; to operate it as a historic site. In 2002, a congressional bill for the sale of the property passed the House but then stalled in the Senate, due to worries about the sale of public land to a religious group. The concerns were mainly the result of the land including areas commonly used as campgrounds by emigrant trains, the Pony Express, and other landmarks such as Devil's Gate. As a result the Bureau of Land Management, part of the Interior Department, had to negotiate a long-term lease with the Church. This lease was signed in 2004, and allowed the Church to manage and maintain the property for 25 years.

In 2006 a settlement following a lawsuit by the American Civil Liberties Union, modified the way the site is administered, and required that the BLM remove religious references from the site and that the Church provide a public entrance to the cove through their property, but independent of the Visitors' Center. The Church's volunteers at the site were also required to simply answer questions rather than approach visitors with anything that could be interpreted as proselytizing.

About 100,000 people visit the site each year, of which the majority are members of The Church of Jesus Christ of Latter-day Saints. Every year thousands of LDS Youth participate in "Handcart Treks" through the area near Martin's Cove. These Treks involve dressing up in period clothing while spending several days pulling handcarts and camping out along the Mormon Trail. The highlight of their Trek is visiting Martin's Cove and nearby Devil's Gate along with the LDS Visitors' Center.

Addresse to the other sections of the site include:

Admission is free. Open daily from 9:00 a.m. to 9:00 p.m. During winter months, the visitors’ center closes at 4:00 p.m. For trail information call the site directly.