The Ward Museum of Wildfowl Art preserves a collection of wildfowl art, from antique working decoys to contemporary carvings, sculptures, and paintings created along the eastern shore of the country. Its collection is the largest of its kind in the world. Part of the collection is comprised of the decoys made by brothers Stephen and Lemuel Ward—for whom the museum is named after—from much of the first half of the 20th century. The museum also features changing artist exhibits, film screenings, a puppet theater, and other events and programs.

Surrounded by wildlife in the heart of the Atlantic Flyway, the Museum features the world's largest and finest public collection of decorative and antique decoys. 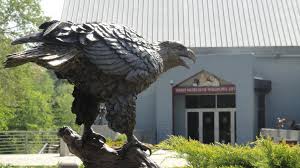 The museum was established in 1968 as the Ward Foundation. It promoted its collection through exhibits, publication, and general advocacy. In 1975, the museum was finally opened in Holloway Hall on Salisbury University's campus. The growing collection prompted the construction of the current building in 1992.

For roughly forty or so years, the museum has also taken part in the annual Ward World Championship, a convention of artists from all over, gathering to show off their intricate avian sculptures and art. Ward Museum also offers educational programs and services, which have served roughly 10,000 children annually. Having members in all fifty US states, the Ward Museum continues to be an example of the natural beauty of avian life, and a celebration of man’s artistic achievement.