Burning Springs and the Rathbone Well

Burning Springs was one of two oil fields in the world prior to the Civil War and the Rathbone Well within Burning Springs is the oldest producing oil well in the world. The Rathbone family mainly owned and operated this oil field until the Oil Boom of 1861 in which over 10,000 people moved to the area in less than a year. In 1863 during the Civil War, the Confederate army burned the town and over 120,000 barrels of oil which drastically hurt the Union. Today, Burning Springs has few inhabitants, but is listed on the National Register of Historical Places and has a small park commemorating the oil industry.

Sign at the park and museum in Burning Springs 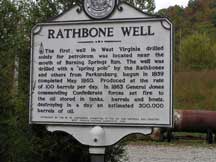 A well in Burning Springs 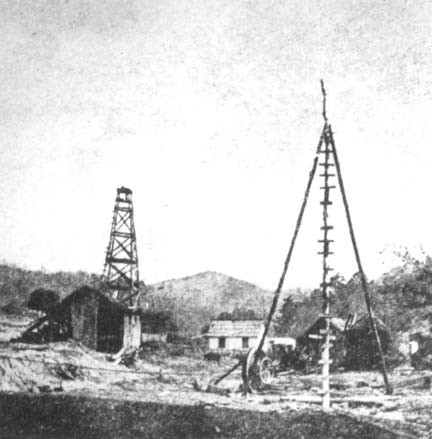 John Rathbone, the father of the Rathbone family that started the oil boom 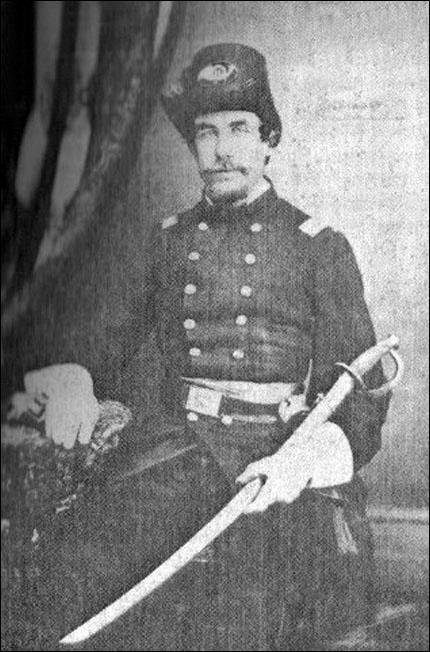 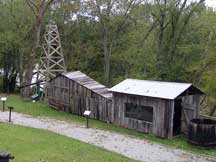 Burning Springs was first inhabited by Native Americans. It was discovered by Europeans first in 1772 on an expedition of the Little Kanawha and Ohio Rivers by Jesse and Ellis Hughes and Colonel William Lowther. In 1792, several people hunting in this area were killed by some of the area Native Americans. It is recorded that by 1810, several Europeans resided in this area. There were some schools and churches built around this time.

The first well was drilled in 1832, however, this was an unsuccessful salt well. John V. Rathbone purchased one hundred acres of land in this area in 1842. In 1852, another salt well was drilled, but was abandoned because it contained more oil than salt. Two brothers, J. Cass Rathbone and John V. Rathbone had been gathering oil from the river for several years and sold it as medicine. In 1859, they leased the oil-contaminated salt well and produced 7 40-gallon barrels of oil a day. With the success of this well, the brothers decided to drill deeper wells for oil in 1860. They drilled 303 feet to find a well that produced 500 barrels of oil per day. This is the famous Rathbone well. All sources differ on the production amounts of the wells drilled following this, but no matter the number, it was an extraordinary amount of oil produced in Burning Springs.

When word spread that oil had been found in Burning Springs, people from all around the United States came to invest in oil. This was the Oil Boom of 1861. The Rathbone Brothers sold over 70 leases of one acre each for people to drill on. At its peak prior to the Civil War, some records show that over 10,000 people lived in the town of Burning Springs. This was much more than nearby Elizabeth and Parkersburg at the time. In less than a year, the town of Burning Springs sprang up with several hotels, stores, saloons, machine shops, oil well supplies, Blacksmith shops, and much more. The town ran about a mile and a half long. People came not only to drill oil, but to cater to oil boomers, manufacture oil barrels, and transport the oil to Parkersburg, WV. Oil was transported mainly by the Little Kanawha River.

During the boom, the Civil War was in full swing. On May 9, 1863, Confederate General William Jones and his troops invaded the town of Burning Springs. Businesses and homes were robbed. Every oil derrick and oil boat was set on fire along with about 120,000 barrels of oil waiting for transport. The Little Kanawha River was in flames for miles, destroying house boats and timber along the shore. The Confederate Army did this to prevent the United States from collecting the tax from each barrel of oil.

After this disaster at Burning Springs, it was thought that the oil industry may be over here. However, the Rathbones and some other families persevered and had more growing success. The Rathbones eventually sold out in 1865 for $400,000. Hundreds more wells were drilled within the next few decades. A great deal of oil was still produced at Burning Springs until the late 19th century. Some oil is still produced today in some remaining wells.

Today and for the past half a century, there are not many original structures standing due to fires. In 1971, Burning Springs was placed on the National Register of Historical Places. A park and museum at the location were opened in 2004 and are still in operation today.