After raising $4,500 from their community, Patapsco Society of Friends, a Quaker friends meeting, built a new meeting house within the town of Baltimore in 1781, successfully fulfilling their wish to move within the town limits. Today, their meeting house has the honor of being the oldest religious building in Baltimore. The Patapsco Friends Meeting (later known as the Aisquith Street Meeting) moved to the site from a former site on Harford Road, two miles north of Inner Harbor. They further worked to establish a school, The Friends School of Baltimore, at the site in 1784. In 1967, the meeting house received a full historical renovation which restored it to its mid-eighteenth century condition. Among the meeting house's most notable members were Johns Hopkins and B & O Railroad giant Philip E. Thomas. 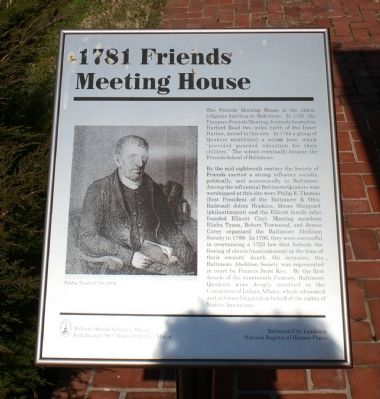 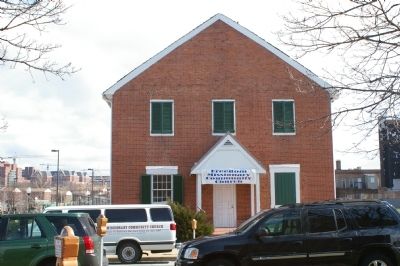 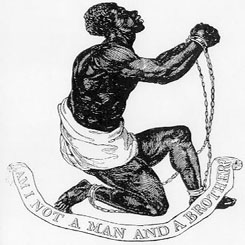 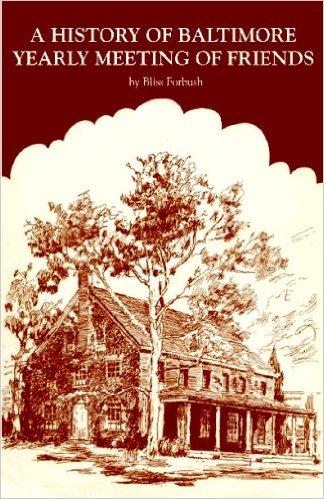 Architecturally, the Patapsco Meeting's new house was a two story building featuring separate entrances for men and women which opened up into a large meeting room which could be sectioned off with sliding wood doors to give men and women their own meeting spaces. The design is attributed to George Matthews.

Quakers held a great deal of social, economic, and political influence in Baltimore by the mid-eighteenth century. Important eighteenth and nineteenth century Baltimore area Quakers included Johns Hopkins, Philip E. Thomas (the first Baltimore and Ohio Railroad president), Moses Sheppard (philanthropist), and the Elicott family (founders of Elicott City). A large aspect of Quakerism historically is working towards social reform, such as the abolition of slavery and prison reform.

In 1789, Friends Meeting members Elisha Tyson, Robert Townsend, and James Carey founded the Baltimore Abolition Society. This group overturned a 1753 law that bound people to slavery even after their owner’s death. Francis Scott Key, who wrote the “Star Spangled Banner,” represented the Baltimore Abolition Society in court on multiple occasions. Baltimore Quakers also advocated for the rights of Native Americans by becoming involved with the Committee of Indian Affairs.

Eighteenth and nineteenth century Quakers who were opposed to slavery were aware that Quakers had, in the past, held slaves. However by this time, the practice had been deemed immoral within the Quaker belief system. Jonathan Dymond, an English Quaker, said, “[A]ny human being who has not forfeited his liberty by his crimes, has a right to be free—and that whosoever forcibly withhold liberty from an innocent man robs him of his rights and violates the moral law.” Another Quaker, William Jackson of Pennsylvania, wrote in an 1846 pamphlet, “No one is under any moral obligation to lend himself as a tool to others for the commission of a crime, even when commanded by his government to do the wrong.”

"Quakers in Action," Quakers in the World, http://www.quakersintheworld.org/quakers-in-action/207